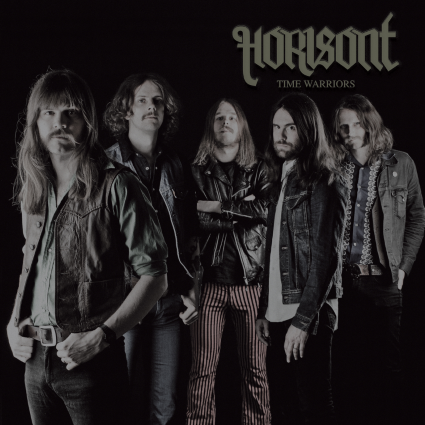 In the grips of the retro rock revival, one of the things that remains lost on us is how staggeringly creative bands of that time were. They didn't just push the boundaries of popular music, and define rock as we know it, they did it at a pace that is unimaginable today. The Beatles' entire career lasted nine years, during which they wrote, tossed out, and re-wrote the rules several times. Life and music were different back then. Bands couldn't take three, four, or five years in between records and expect there to be an audience waiting for them when they finally got around to making new music. Records were released almost every year, sometimes more than once a year. As a fan, I can't imagine how gratifying such a time must have been.

I say this because Horisont takes a page from the old days, returning with a new album just a year after their last. I reviewed that album when it came out, and was quite surprised to see a new one coming down the line so soon. We're so conditioned to wait that what used to be normal is now shocking.

Happily, not much has changed in the world of Horisont since we last heard them; they continue to pump out a gloriously retro variety of rock that makes me wonder if Mr. Peabody kidnapped me and took me back in time to see what the good ol' days were like.

It only takes one listen to the opening “Writing On The Wall” to get what Horisont is all about; retro sounds, and the kind of songwriting modern bands have given up on. There's nothing the least bit flashy about the music, but there's a sense of songwriting as the song rises and falls that today's rockers are utterly blind to. The following numbers reinforce the points, hammering out more solid songs that marry nifty riffing with a desire to anchor the songs with solid hooks.

The weakest link in the band's arsenal is still the high-pitched, slightly shrill vocals. Even for people who grew up listening to Robert Plant wail his wait through the blues, they can be a tough element to wrap your head around. It's not enough to bring the album down, but there's always a nagging thought in the back of my head, asking what the album could have been if there was a better singer presenting the songs.

But when Horisont hits the right notes, they're a darn good band. Songs like “Diamonds In Orbit” and “Vand Tillbaka” can't be denied, the riffs and hooks sharp enough to dig in and leave an impression. They aren't just window-dressed vintage rock, they're able to capture the sound as well as the spirit of the time. No, you're not going to mistake them for Led Zeppelin's classics, but they're obviously cut from the same cloth.

There's some fat to be trimmed in the middle of the album, but nothing ever drags on long enough to make you need to skip ahead. There is enough momentum in these songs to keep the record moving along, making it a fun ride while it lasts. Horisont hasn't yet mastered the skills needed to make a truly great record, but the pieces are in place, if they can hone their focus and develop their songs to their fullest potential.

“Time Warriors” is not an album as strong as anything put out by Graveyard, the leaders of the retro revival, but it's on par with their last album, which I also enjoyed. “Time Warriors” is a fine trip back in time, but it's not enough to make me leave the present.