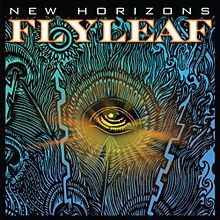 Some albums are destined to be bittersweet. No matter the result of the creative work put in, the surrounding events necessitate that the music will never be the full story. Those are albums that will always carry a label with them, the proverbial asterisk that they must wear like a scarlet letter. It's unfair to burden a work with the happenstance it emerged from, but it's something we can't help but do, and it's not something we're liable to change. Just like people will forever be unable to talk about “Chinese Democracy” without mentioning in the same breath the amount of time the record took to be made, the people who are emotionally invested in Flyleaf will never be able to think about “New Horizons” as anything but singer Lacey Sturm's swansong with the band.

In some respects, the turmoil in the band's lineup gives “New Horizons” something it desperately needs; a hook. At this point in the band's career, there isn't anything new left to the sound they mine, no detour sharp enough to alter the perception fans and non-fans already have of their music. They have, for better or worse, established who they are and what they do. “New Horizons” was never going to be able to change people's minds, which is something Sturm's departure may actually do.

If you've heard Flyleaf before, or any of the bands who play the same kind of music, you already know what to expect from “New Horizons”. The album is a collection of hard rock influenced pop, loud guitars underscoring hooks that try to reach for the stars. That aspect, the unabashed desire to be melodic, is a welcome refresher from the rest of what passes as the rock scene these days. “Fire Fire” starts us out with what might not be a great instrumental track, but an effort that tries to layer so much into the chorus, to make it sound as large as humanly possible, that the end result is at the very least ingratiating.

“Call You Out” is the most rock-oriented song on the album, the kind of song that tries to appeal to everyone, but misses the mark. It's a good song, no doubt, but it relies on a faulty assumption. The people who want to hear the heavy guitars that propel the song don't want to be subjected to a pop chorus, and the people who love the pop elements are going to be less than thrilled by the down-tuned backdrop. There are some, like myself, who enjoy that juxtaposition, but such people are the minority.

More successful are the songs that err on the side of pop. “Cage On The Ground” is a half-ballad that takes an angst-ridden vocal and swells into a monstrous hook. Listening to it, you can picture lighters in the air (cell phones for the modernists), swaying to the beat as thousands of voices sing together. It's the kind of magical moment that you wait so long to hear, and when it comes, it makes the pandering to other audiences worth it.

The more striking feature of the album, like the previous releases, is Lacey Sturm. Her voice, her mere presence, elevates the band to something worth paying attention to. Musically, Flyleaf doesn't offer anything that stands out from the countless other bands that aim for commercial success. The instrumental portions of the songs are standard fare, never offering up a riff or bass-line that is going to stand out and stick in your mind. Everything memorable about the songs comes from Sturm's vocals and melodies. She is what makes Flyleaf soar, and she makes “New Horizons” the bittersweet pill it is.

Taken on it's own, “New Horizons” is a good pop-rock album, the kind of thing that should be more popular than it is. These are solid songs delivered with conviction. The problem is that I can't help but listen to them except in the shadow of her absence, knowing that the most interesting facet of the music I'm enjoying is already gone. It doesn't tarnish the songs, but it does affect the album. I find it hard to love what I know is the end, even if I enjoyed getting there.