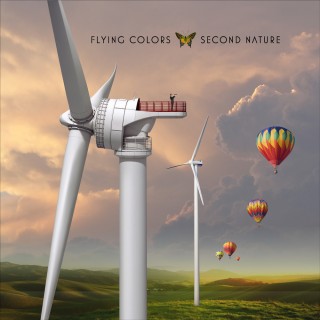 It’s been a busy year for Neal Morse. First, he helped put out the new Transatlantic record which my cohort Chris still believes (and not erroneously,) to be one of the best albums of the year. Then he popped out a solo record (as seen this week on this site!) and now he’s also gearing up to release the new Flying Colors record in the fall. Flying Colors, for those who may not know, is the on-again, off-again, whenever-we-have-time project that Morse works on with apex drummer Mike Portnoy, Steve Morse (no relation,) Dave LaRue and newish vocalist Casey McPherson. This, the band’s second record together, aims to expand upon the critical acclaim of the first.

What amazes most about “Second Nature” is how the musicians involved choose to dazzle merely through the process of their orchestration and arrangement rather than through an abundance of signature changes and artistically strange keys. “Second Nature” is progressive in the original, King Crimson sense – this is music that makes interesting choices, but doesn’t make you reach for a math textbook, nor does it require more than a rudimentary knowledge of music composition. There’s a separate conversation that can be had concerning how and when progressive music morphed into a splinter genre that spawned a stereotype of holier-than-thou artistry, stuffed shirts fans and automatic condemnation of all things that don’t live up to the standard, but the important part is that Flying Colors is aiming to either break that mold or at least ignore it. (Sidebar: that conversation, if we were to have it, would end up being eerily familiar and extraordinarily uncomfortable for metal fans. True story.) “Second Nature,” above all else, makes the listener wonder what happened to more popular forms of rock; that merely taking the time to make sure the instruments have some breathing room and aren’t humping each other aurally has become the hallmark of an album that is ‘artistic.’

There are several moments worth highlighting, but the largest of them is the penultimate track, “Peaceful Harbor.” The song is big, but it easily surpasses the constraints of the adjective ‘big’ and grows beyond the common associations of that superlative. The combination of aural base, multi-layered chorus with associated guest vocals lends the song a feeling bordering on hymn-like. Rather than an affirmation of faith, the song is an affirmation of the artistic virility of rock, a nod that the genre isn’t entirely debased and dumbed down.

Everything else on “Second Nature” that’s worth talking about stems from that basic premise. The constant theme of the record, even in the softer moments (more on those in a minute,) is to stress that pop rock, perhaps especially progressive pop rock, can still be colorful and tuneful and melodic. The bright keyboards of “Open Up Your Eyes” may sound like Transatlantic lite, but that doesn’t mean their impact is lessened by the successes of that record. This record is a fun time, cloaked within the greater expanse of the progressive idiom.

Let me stop talking above my pay grade – “Second Nature” is plain good and good fun. The spacing of the instruments, the way the bass of LaRue weaves intricately between the riffs of Morse politely and smoothly during “Bombs Away” sets the tone for how to view this record properly. Those same themes and elements are woven into the greater framework from end to end, nearly without exception. These are its strengths, and minimal are its weaknesses.

Back to the soft moments. Flying Colors attempts a heartfelt outreach with “The Fury of My Love,” which ends up coming across as a poor man’s Ozzy Osbourne ballad, and those familiar know how cringe-inducing that can be. The soft opening is fine, but the large crescendo is overdone and unnecessary.

There is a nagging feeling in moments of "Second Nature," that it could have been more. The album's closer is an eleven minute epic, and while much of the album reminds of the middle days of Rush's career, that song does not. For a song listed in three chapters, there doesn't seem to be the expected payoff or logical flow of a song that's meant to be built like a theatre performance. The album contains several fragments of songs that reflect that same feeling, but it passes when the musicians return to form.

Those are small things, and they're the only notable missteps on “Second Nature,” a record that creates a color-streaked and bright mental picture as you listen to it. It’s an accessible record for all fans of rock that still believe in the power of the medium to raise spirits and charm the willing consumer.