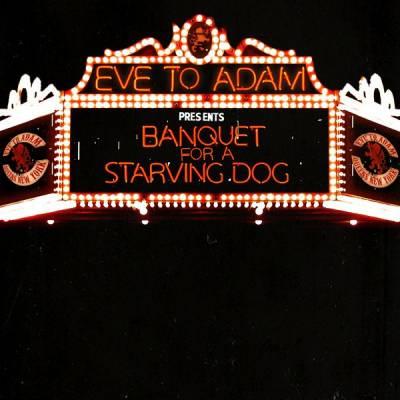 Album Review: Eve to Adam - "Banquet for a Starving Dog"

Eve to Adam's new album "Banquet for a Starving Dog" is an exercise in new-era emotional rock. Now, that does not mean the album is emo. Rather, this is twenty-first century rock in the style of the Foo Fighters with a thick layering of attempted emotion.

"Banquet for a Starving Dog" finds its groove early and never voyages away from it. Which should sound like a compliment, but in this case, is a detriment. The album is constrained by the cookie cutter idiom of rock-with-feelings and as such never explores what could be. The musicians of Eve to Adam are clearly possessed of a certain modicum of talent, but their end product wallows in melodrama and digs in for the long haul.

Speaking of, "Banquet for a Starving Dog" takes forever to get from track to track. Some of this is due to the similar sounding cuts stacked near each other, but the feeling also owes to the just-below-tepid pacing. Overall, there are too many pieces that have little or no contrast between them. “Getting Weird” and “Glasses High” are perfect examples of the kind of linear songwriting that takes place on the album.

Now, let's not get carried away. Eve to Adam performs their songs with fervor and honest effort. The band took time to craft their songs in a style that is half Foo Fighters and half modern day Percy Sledge. From that angle, the album is a success: Eve to Adam accomplished exactly what they set out to do.

There are a pair of moments on the album that rise from the din of drawn-out context. "Ransom" has a harsher edge and comes across as a poor-man's Soundgarden. However, "Little Says" is a dire journey featuring a nice solo that, contrary to the rest of the album, displays a fair amount of musical variety. It's a nicely balanced piece that shows just minor glimpses of what could have been.

In the end, "Banquet for a Starving Dog" might remind you of the following scene:

Your college friend with a rock band sits down with you in his dorm room and grabs his guitar; he wants to play you some new songs he wrote. He tells you that chicks will love it.

He proceeds to play a series of songs that come off as a little bit too smart for their own good. Each one attempts to probe the romantic dynamic of men and women, but each one seems to fall into one or two categories. Too much allegory, not enough substance.

When he finishes, your friend looks at you, eyes expectant for approval.

You stare at him somewhat blankly. You shrug noncommittally.

"What do you know?" he says, frustrated. He grips the neck of his guitar and storms out.