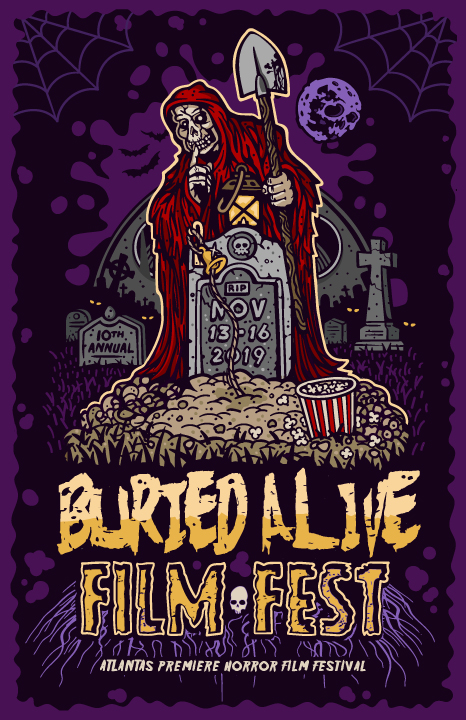 This last November members of Team BGH had the opportunity to check out some of the short and feature films from the Atlanta-based Buried Alive Film Festival. Adam takes us through several shorts screened during the festival’s 11th consecutive year.

Sometimes going to hell feels like heaven. This is a four-minute short by Dusty Brown and it is EXACTLY what I want in the medium. The short starts in media res with Dusty Brown trapped in an elevator, trying to get assistance. I have seen other reviewers call this bureaucratic, but this has so much red tape that tech support at work uses it as a training video. The dialogue is naturalistic and got a chuckle out of me. The music by Matt Valigdan is elevator music (quelle surprise), the set design is sparse but beautiful art deco, and the camera work is minimal, employing a security camera to disquieting effect. Sounds like I am describing an elevator doesn’t it? Kudos to Adam Teninbaum, who pulled off a remarkably simple visual effect that was the highlight of the short.

Sadness. Lust. Eternity. Redemption. Lofty concepts for a film that is three minutes long. Hanako-San was directed, shot, and edited by Dan Tabor originally in 2014. The short begins by explaining that Hanako-San is a Japanese urban legend arising during World War II. The plot is about a schoolgirl who is bullied and sexualized by her father. She knocks on a stall door in a bathroom and asks for Hanako-San. She is let into the stall and suddenly transforms from live action to cartoon. She is then killed by a little girl that turns into a tentacle monster!

My first problem with this as a short film is that we never learn our main character’s name and she is killed in an extremely sexualized manner with tentacles ripping off her bra, as she is torn asunder. We see an overhead angle of her ripped up corpse including a shot of her panties and exposed breast. Not only is this character underaged, but there was no need to sexualize the violence against her. Our lead is an unnamed sexualized victim and that is disgraceful storytelling.

Technically the film is well shot with great focus on the protagonist’s eyes with engaging cinematography that leads into well drawn animation. But if this is a “be careful what you wish for” film it does a poor job communicating its message. By the end it is unclear what redemption our protagonist received; unless it was death releasing her from her worries.

My other major issue – why tentacles? Its no longer creative. I checked the lore and the character usually drags you to hell through the toilet or a 3 headed lizard eats you – much more fascinating than tentacles.

TENTACLES? How did I randomly choose two short films focused on slimy, slippery, slithery sensors aka TENTACLES! Written and directed by Trevor Mirosh, Exhibit Man follows Barry Leach (Troy Mundle), a forensic photographer who discovers a vigilante operating in his small community. The film begins with a parasite laying a worm in his body resulting in some surprising benefits as his vision improves, most of his illnesses are cured, and his penis may have grown-according to his wife. Its invasion of the body snatcher written by the middle school class clown.

Is this film dubbed a comedy despite a deficiency of jokes? Yes. Does it need a more coherent editor? Of course; and most likely one who is not the director. Is there a strip club scene that was added as a huge contrivance for the ‘straight male audience’? Yeah, you have seen this film before. While the short features some good puppetry and makeup effects, I cannot think of another positive element about it.

What’s this? What’s this? I found a giant toe, what hap-pen’s next, you’ll have to watch the show! Nightmare Before Christmas allusions aside, Toe is a stop motion animation film retelling the story of the American folk tale of the Big Toe; boy eats toe, corpse wants toe, corpse haunts boy. It’s a match made in heaven. More recently you saw this story in Scary Stories to Tell in the Dark (2019) and I honestly enjoy this version better.

This is weirdly one of the few films I have seen so far from the festival that has been in the pure horror genre. The stop motion is seamless, except when the filmmakers use its herky jerky nature to invoke unease in the viewer. The puppet design and fabrication by Demi Kay Schlehoffer is outstanding for what the filmmakers were going for. The corpse is the perfect ratio of silly-to-scary. The music was a little obvious, but set the tone appropriately. And I absolutely loved the use of the setting to justify why on earth a child would eat a rotten toe (never made a lot of sense in the original). Overall is an admirable short although it does nothing to elevate the piece from its original folktale.

Monkey’s paw meets maternity menace in this five minute short by director David Bornstein. Did I like this film? No. It was like if Adult Swim's infomercial block made Hellbaby (2013). But this was one of the most inventive ideas for the old sell your soul for something stupid tropes I have ever seen. The lead is a chauvinist man child who is upset that his pregnant wife no longer has time to make him that sweet guac. So he sells his newborn’s soul and she starts making killer guac again.

This movie was gross on many levels, but good horror is meant to unsettle. I didn’t laugh during the film and the absurdity of the situation manifested more as surprise followed by revulsion. The devil is voiced by none other than Ray Wise to great effect, despite the confused character design that felt like 6 ideas jammed together.

If you want a film to gross out your friends then this may be the short you will be sharing for a longtime to come.

When a film can bring you deep melancholy, touching cheerfulness, and a jittery dread all in 12 minutes – that is what we call peak efficient storytelling. La Noria is my favourite short film of the festival. The film was written and directed by Carlos Baen, who was a former animator for Pixar (shocking no one).

The story follows a boy whose father implicitly passed away. Prior to his death, we infer they developed a strong bond while building a toy Ferris Wheel, a Rueda de la Fortune (Fortune Wheel) or in this case a Noria (water wheel). Things start to go awry, and the boy is chased by monsters that may have come from his drawings.
Every moment builds or pays off the tension we are experiencing, including a child with bare feet in a dangerous house. You may have seen this type of ending before, but the artistry, the engrossing music, and the shot composition all give this thing a gut punch that remains with you.

The credits feel like a Marvel movie as so many talented artists went into bringing this vision to life. I have no idea what the budget was, but I cannot stress how perfect the character design is. If Guillermo Del Toro does not produce Mr. Baen’s next movie, I will be astonished. All animation studios take note; this is elevated animation with a genuinely human story that audiences crave.