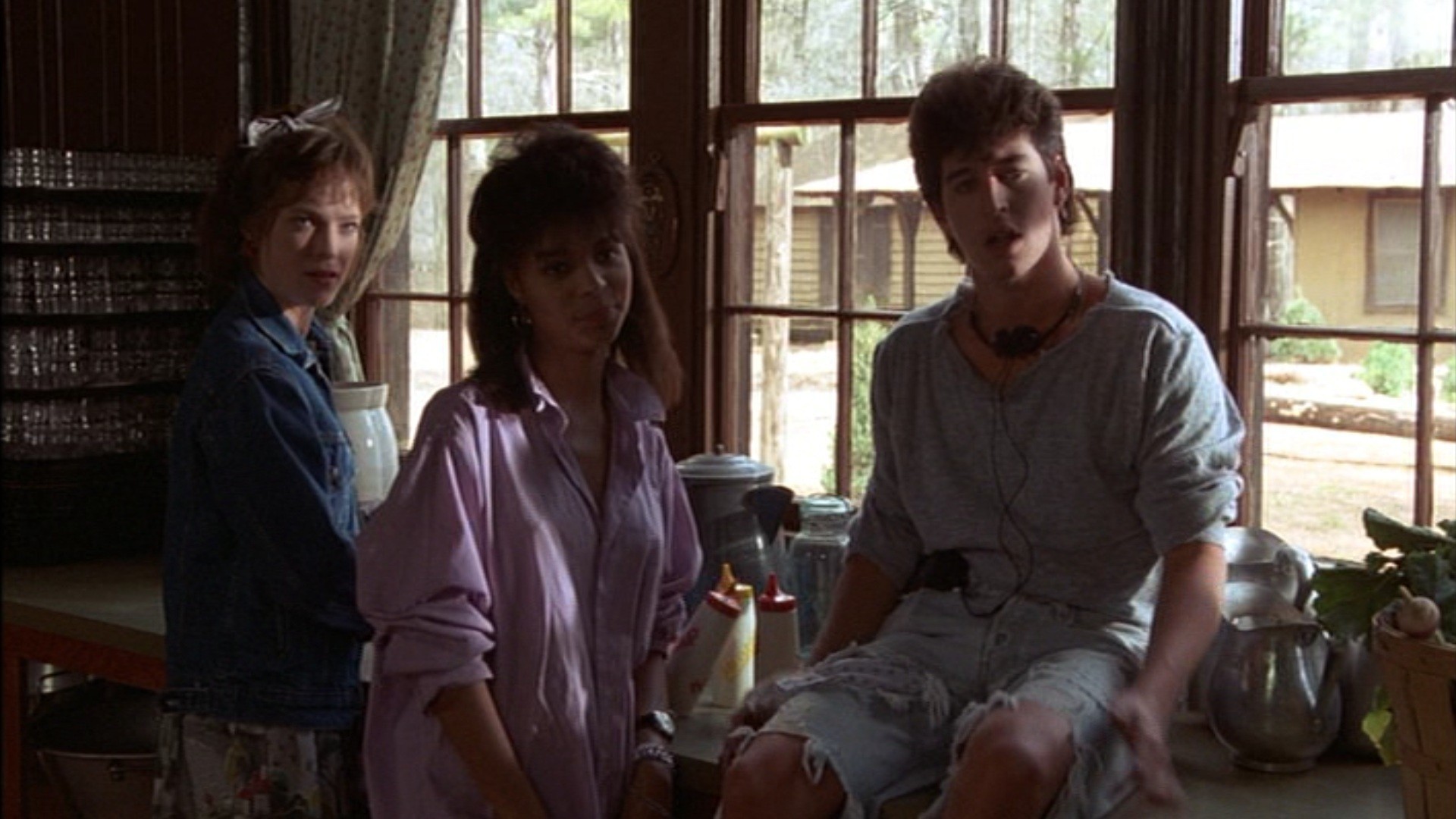 As you may have noticed, I decided to take the weekend off!  Weekends are glorious things, a pair of days where one doesn't have to worry about pesky things such as day jobs or going to bed at reasonable hours.  For many of us, I'm sure that the weekends are a time in which we cram as many movies in as we can.  Armed with a massive collection of DVD, Bluray and streaming options galore, it's easy to find something to watch in a weekend cram session.  In fact, for many of us, the options are so widespread, the simple act of choosing a movie to watch becomes paralyzing.  How many of you have found yourself sitting down to watch a movie, spending forty five minutes watching trailers, then falling asleep before you even start?  I know I have!

Today's wealth of options is a far cry from the choices we older folk grew up with.   In fact, I'd dare say the very nature of being a movie fan has evolved since I started getting into horror movies in my early teens.  Gone are the days of pouring over a worn copy of Fangoria to find new movies to watch, arrived is an hour spent scrolling through the thousand titles available on Netflix Instant Watch, with a sigh of, "I can't find anything to watch!"

Growing up in a small town in Northern Indiana, horror movies were available, but not widely.  Thankfully, we had video rental stores that carried many a horror title, yet the selection wasn't updated very frequently.  We were also blessed with a local library that checked out laser disks and VHS, and actually carried a fair number of horror titles as well.  But again; the selection wasn't rotated vary often. That is to say, in the mid-1980's, our selection was limited.   Even more, I grew up in a house that didn't have cable until I was in college.  Four local stations and not much else!  Don't get me wrong, I'm not whining; I'm just spelling out how things were.  Our group of friends spent time passing around battered copies of Fangoria and Gore Zone, reading about flicks that we were dying to see, but knew there wasn't much chance that we were going to find them, if we hadn't found them already. Bootleg VHS tapes with three or four movies recorded off HBO by your one friend who had the channel was a hot commodity in those days!  For us film fans in the 80's, a big part of horror fandom was the thrill of the hunt, finding that rare gem you read about two years ago and were finally getting to watch it after ages of hard work.

In the 90's, our options expanded.  The 90's saw the invention of DVD and soon it was everywhere.  Studios were cranking out movies on DVD and we were buying them as fast as we could.  Pricing had stabilized making movies far more accessible.  Plus, with the age of DVD came the age of Blockbuster and their ilk.  The selection was growing.  Even on cable, we saw the growth of premium channels.   HBO soon had seven different varieties, as did all the others.  Again, more chances to find more hard to find films.  In this time though, digital cable wasn't quite perfected.  You didn't have plot synopsis at the press of a button, but you had titles.  So now, we still had the hunt that started in the earliest stages of our fandom, but now it had evolved.  You flipped channels until something caught your eye.  It was the golden age of channel surfing, and often times if something drew you in with just a scene, you knew you were in for something special.  Some of my favorite films were found in this way, such as when flipping channels with no plot information, stumbling across a scene of a man dressed as Buddy Holly, fighting people with a katana and a guitar.  It's a scene that grabs your attention.  After watching this random find, "Six String Samurai" remains one of my favorite films to date.

In today's age, being a horror fan is far easier.  Don't get me wrong here though; I'm not complaining.  Not even a little bit!  I for one relish the availability of my favorite sub genre.  Yet sometimes, the thrill of the hunt in horror (or any) fandom feels like it's missing.  I can read about a horror film that I've never heard of on one day and luck, but watching it moments later courtesy of streaming services such as Netflix, Amazon or On Demand.  Where once I used to read a brief two page article about the making of a film that seemed amazing, knowing that I wouldn't be able to know any more about the film until opening night.  These days, we're inundated with behind the scenes facts, leaving us a bit overwhelmed once we see the finished product.

So again, this isn't a cranky old man screed.  It's not me railing against kids and their dag-gummed new fangled technology.  I love being able to see one of you ramble on about an obscure film on a blog, and find myself watching it moments later.  It's just an example that genre fandom has changed, losing some of the hunt that made it a thrill when you made that special find.  Once again, perhaps I'm more nostalgic than any thing else.

And yes, I realize that this still makes me sound like a grumpy old man.  And I did manage to take two days off from article writing over the weekend.  I was however, taking full advantage of the digital age and enjoying some fine examples of movie cheese, horror flicks that I may have waited years to see at one time or another.  Some of those I must admit, would have been better off waiting a little longer.

"Curtains" has a bit of a cult following.  There are folks out there that really enjoy the campy and over the top dialog from this 1983 film.  I can't really say I'm one of them though.  As a fan of bad soap operas, (don't get me started on the early 80's Australian soap, "Prisoner of Cell Block H), I can appreciate some of the acting going on here.  It's certainly full of cheese and quite hammy.  The movie is a long stretch though which takes some effort to get all the way through.  It took me for tries to make it to the end!

At some point in my weekend mixed with hops and "Friday the 13th" films, I had a stray thought that I wanted to watch "Witchboard".  I think it I had only seen it once back in the day, so didn't remember much about it.  I did know that there was a new flick heading to theaters soon by the name of "Ouija", so I figured it'd be a worth while journey.  Except...it wasn't.  I believe I highly over valued my memories of Tawny Kitaen and her acting.  What can I say, I was pretty young in 1986!

As much as professed my love of "Friday the 13th Part 1 and 2" earlier, Part 6 continues to be my favorite of the franchise.  It was at this point that the train left the tracks as far as the franchise went.  The threw off the shackles of tying themselves to this semi-based in reality tale of a troubled mother, a disturbed son and more and went full on supernatural.  It was this film that saw Jason become an otherwordly unkillable machine and guess what...it's alot of fun.  It's fun because the film makers decided to throw off any pretense and stop taking themselves so seriously, and we wind up a with a campy over the top slash fest.  It's also funny because Jason poses.  A lot.

Here is a perfect example of the evolution of the fandom in the digital age.  I read Joe Hill's novel in 2010 when it first came out.  I fell in love with the novel, I found it really great.  Time passed, and soon it was announced that they were going to make it into a film.  I was excited.  Then, they started talking about how filming was done, how they were looking at release days, it was playing limited festivals, then it's going theatrical on October 31st!  Then just last week, I saw Joe Hill himself mention in a blog post that "Horns" was getting released on VOD before it's theatrical run, and then I watched a film I've been longing for in the comfort of my broken in couch, with a nice cold beer in hand.  I love the future!   (Here's my complete thoughts on "Horns", for those curious.)

And there you have it, my hop addled thoughts from a weekend spent melting my brain cells over bad 80's horror films!  It's a lot of fun, to be quite honest!  Besides, I'm 40 now, how longer am I really going to need those brain cells? My movie count for October is now at 22, which means I may not use my idle time efficiently.  But I don't care!  (Another perk to being old.)  I've yet to have anything in particular planned out for the rest of the month's viewing, aside from a special marathon on Halloween itself, since I had the foresite to take the day off.  (I know, right?)  So stay tuned as I've been starting to eyeball the "Night of the Demons" DVD's on my shelf and there's a host of Monster flicks that's calling my name on Netflix.  We could be in for a bumpy ride!

If you're bored and need some more rambling on film, be sure to check out Episode 13 of my Instomatic Podcast that was just released this Sunday!