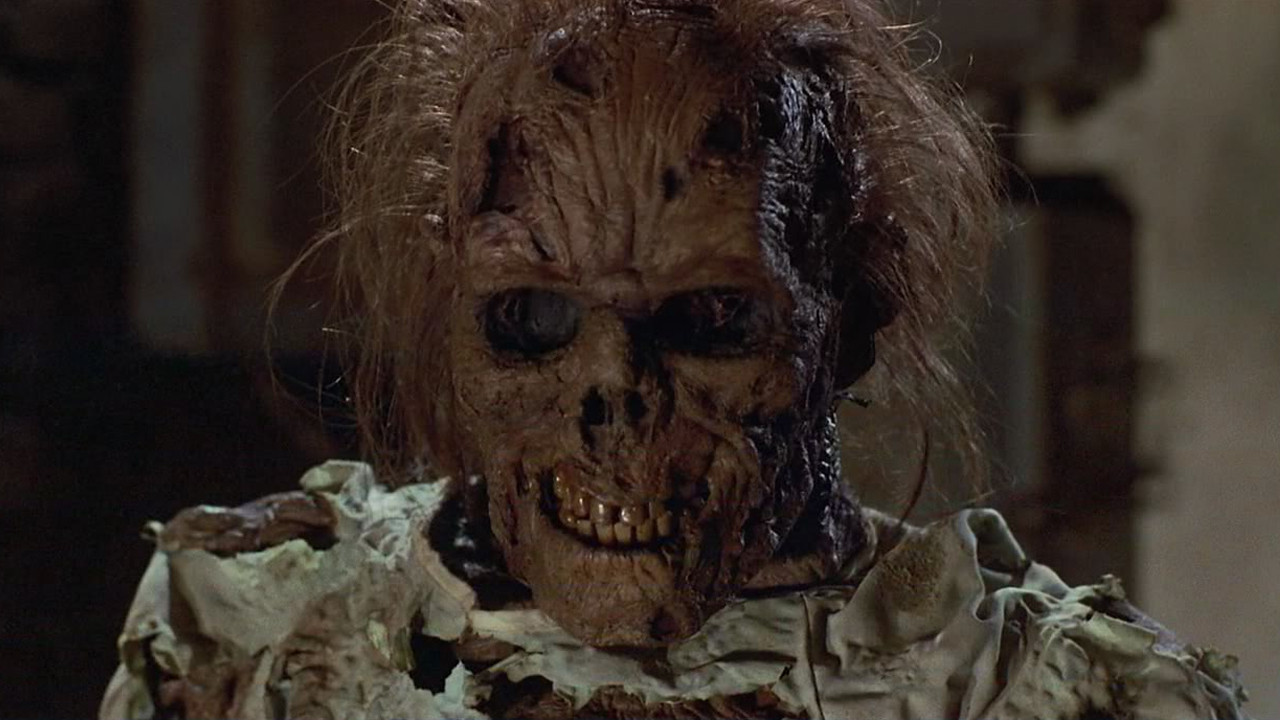 By Casey on October 02nd, 2014
"The worms crawl in, the worms crawl out, the worms play pinochle on your snout."
Ever since I was a kid, that old song would send shivers down my spine.  I'm not particularly afraid of worms.  I just find them to be a bit gross.  I mean, I can bait my own fish hook, but i'm not overly enthusiastic about it.  But that's okay, because I don't fish much these days, so I don't really have to worry about handling worms regularly!  Still, it points back to some inherent gag factor I have concerning worms.   If you have a horror movie that includes worms, maggots or anything of that sort?  It's going to set my nerves on edge.  One of my all time favorite horror movie scenes comes from "Poltergeist"; You know the one, the steak on the counter.  It gives me chills just typing this out.
As a young grub myself, I used to spend quite a bit of time at the video store.  We had a great one in my home town that catered to every taste imaginable.  It was an old and worn down building, complete with that dank musty odor that came when stores boarded up all their windows and covered all the walls with carpet.  It had rooms that were seemingly tacked on willy-nilly, leaving rooms of odd sizes that branched off of each other in weird ways. It was dungeon-esque to say the least, with the bright glare of flourescent lighting blazing down from above.   It was a place that felt special and weird, my video store was a place I looked forward to visiting every week.  Thankfully, I had a set of parents that enjoyed movies too, so my step-father took me with him to the Video Place frequently to pick out movies with him.
In those days, in my early teens, I spent much of my time in the horror room of the Video Place. (That was the stores name.  Creative, huh.) You didn't have the internet or IMDb, so you picked your movies judging by the plot write ups on the back of the VHS boxes if you had time to kill.  When it came down to it though, you often grew tired of reading movie plots, or your parents were tired of waiting for you as you marveled over every movie you picked up on every visit.  In those times, you resorted to trusting in the picture on the box.   Sometimes this worked out well,  others not so well.  It was in those long gone days that I learned that valuable lesson that you can't always judge a book by its cover, as sometimes the contents were not quite as advertised.  Especially in the 80's, because let's face it; VHS box art was truly something special.
Often times I catch myself thinking back to those days whiling away the hours in the horror section of the Video Place.  They were formative years to say the least, years that certainly lead to my future ruminating to you dear readers about shoddy horror movies for hours on end!  There is one box cover that still stands out in my mind clearly from those days:

As you can imagine, to a young kid who got the heebie jeebies from any movie that involved worms, maggots and the like?  This movie looked terrifying! Attack of the worms!  Holy crap, indeed!

I'm a grown man these days.  I'm a grown man that can own up to his faults and misgivings.  I'm not ashamed to admit that I still haven't watched "Squirm".  I used to pick up that box and stare at the picture with wonder.  Some times I'd flinch, sometimes I'd face my fears and stare at it for a long time.  Other times, I'd drop it and run off to find my parents.  It had that kind of effect on me.  Some years later, in the age of DVD, I frequented a local mom and pop video store in the town where I now lived.  They carried all sorts of obscure movies, which was a boon for central Indiana.  They also rented films and upon browsing their shelves one day, I broke out into a cold sweat as I came across a DVD copy of "Squirm" that they had for rent.  This copy featured the lead actor sunk up to his neck in a writhing mass of night crawlers; it was daunting.  I still didn't rent it.
Now, with all of this reminiscing on a movie of old, It's natural that you might think I'm going to talk about watching "Squirm" in today's 31 Days of Horror.  Alas, I'm still not that strong of a man.  If you'd like to see me face that fear before October is over though, let me know over on twitter!  I decided to talk about it to though, because the bane of my youth floated to the top of the wave of nostalgia I'm currently riding as it lent itself to the theme I had for today's movie choices, which you will see below:

Part of the magic of this movie comes from our lead characters Chris and JC.  These two are atypical college freshman.  They're a bit dorky, they're a bit awkward.  Let's face it; as horror fans, there is quite a bit for us to identify with in these two!  They are one of us, through and through.  So, as they start to find themselves embroiled deeper and deeper in this wriggling alient menace, it's easy for us to insert ourselves into their shoes mentally, and root for them as they take on the denizens of reanimated dead.  Plus, we get to see Chris win the love of the pretty college co-ed, who was established clearly as above his station in the beginning of the flick.  This is another point for us nerds, a yet another reason to keep us rooting!

The best part of "Night of the Creeps" comes in the form of Tom Atkins however.  With his delivery and dialog, I would dare say this is my favorite role of his to date.  THRILL ME! The man has given up, he's full of attitude, he's full of snark!  He's also full of some of the greatest one liners in B-Movie history.

Long out of print and recently added to Netflix Instant Watch, "Shivers" is Cronenberg's first foray into feature length horror, known in 1975 as "They Came Within".  It was here, in Cronenburg's early period, where we learned of his fascination with the break down of social order, a budding taste for body horror, and his obvious influences by the likes of William S Burroughs.  While the film may not have aged so well, it still tells a story that starts in a well to do exclusive apartment building and breaks into orgiastic madness.

It's not one of my favorite films, but that's not to say it's a bad film.  As with many of Cronenberg's catalog, it's a taste of gonzo weirdness that has an appeal all of its own.  You may not be into the story itself, or his messages on society.  Many a horror fan would be on board, just to see how far the film maker where go, and just to see where this weird journey takes us.

Today's entry ends with only a double feature, as some times the day job rears its ugly head and keeps us from doing the things we love, such as slacking off and watching movies.  But that's okay, there's still 29 days to go and a stack of flicks to work our way through.  Do keep in mind that I may not always write about every movie I watch this month; in fact these two films bring the total movie counter for October to 6!  That's a strong start for only day 2.

If I'm not writing about the films here, you can find me over at Letterboxd.com where I am keeping a tally for every film watched this month.  If you're over there, feel free to give me a follow! You can also catch up with me on Twitter where I've been known to hang around far longer than I should.  I am always keen on discussing horror, and always love to hear what you readers have to say!

Until next time, remember:

Don't you ever laugh as the hearse goes by,For you may be the next one to die.They wrap you up in a big white sheetFrom your head down to your feet.They put you in a big black boxAnd cover you up with dirt and rocks.All goes well for about a week,Until your coffin begins to leak.The worms crawl in, the worms crawl out,The worms play pinochle on your scalp,They eat your eyes, they eat your nose,They eat the jelly between your toes.A big green worm with rolling eyesCrawls in your stomach and out your sides.Your stomach turns a slimy green,And pus pours out like whipping cream.You'll spread it on a slice of bread,And this is what you eat when you are dead.