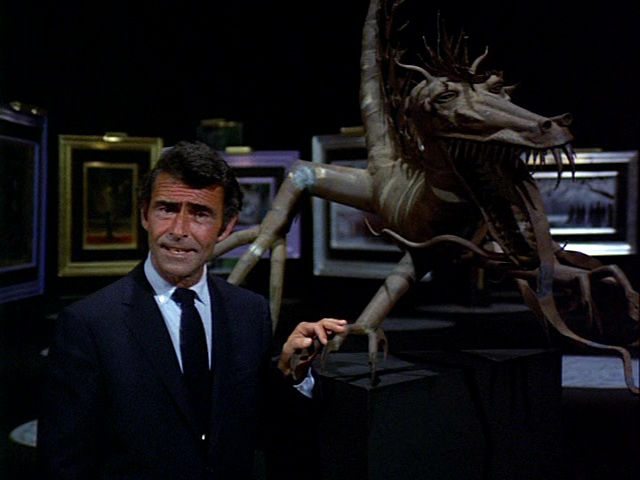 By Andrew on March 11th, 2016
The 1970s was an interesting cultural period. The end of Vietnam, the release of pong, and the birth of the modern day blockbuster with Jaws, and Star Wars. On television horror was not as much the focus, at least not in North America, instead most of the horror shows from this decade come from the U.K., and even Australia.

Easily one of the best known shows on the list, Night Gallery is so low on the list for a very simple fact it's half of a good show. The half that is unmistakable quality is the hosting duties. The whole idea behind the series is brilliant. Rod Sterling (host of the Twilight Zone) introduces a piece of art that ties into whatever story is being introduced. The atmosphere, and delivery in the hosting segments are outstanding. The stories themselves however are really cheap, and extremely over the top. That's not to say good episodes don't exist, Steven Spielberg and Leonard Nimoy directed key episodes, but they are diamonds in the rough. Most episodes feature insane plots in the vein of mind swapping frogs, or a man who can actually get whatever psychosomatic disease he believes to be infected with. Stay for the intro, and skip most everything else.

Our next show surprisingly enough comes from Australia, a country not known for its horror output. Each episode involves some sort of murder, usually done in an overtly elaborate way. The framing device is unique in the way that it actually lets stories begin, and then pauses at a pivotal moment to introduce the “host” of the show. The host Anthony Quayle appears to be in some odd room shrouded with smoke, and there is never any explanation as to his whereabouts or who the mysterious character is. The show doesn't always go into the supernatural, but it doesn't shy away from it either. No one recognizable worked on the show asides from Quayle, but this makes the mysteries all the more captivating as you don't have the “I know that guy” level of distractions that take away from a lot of classic horror television. Spooky, and oftentimes brutally honest The Evil Touch is well worth a watch, and is the only series on this list that doesn't clock in at 50 minutes.

Our next series plays out much like the popular 90s kid show Are You Afraid Of The Dark, except instead of stories by a campfire, we have The Club Of The Damned which is entirely composed of refined British gentleman smoking pipes in a study. If you wish to join The Club Of The Damned you must tell a true story of the supernatural that chills to the bone, if your story fails to illicit the desired response not only are you denied access to the club, but you are also murdered. Made in 1977, this 8 episode BBC series is no doubt completely overshadowed by the still ongoing modern show Supernatural. Its stories ranged from old actors reliving past events, to werewolves haunting a dinner party. The framing narrative is excellent, and there are some superb stories worth giving a watch.

Are you tired of enjoying life? Then Beasts may be the perfect horror series for you. Beasts is a tough watch, both because it has some really depressing stories, but also because it can seem really drawn out, however when Beasts gets going you find yourself glued to the screen. Most episodes of the series feature a single location, be it a Supermarket, Country Home, or Movie set and it oftentimes doesn't end to well for the characters involved. Created by Nigel Kneale of Quartermass fame this series has some outstanding episodes. The best of the six episodes involves a movie studio making yet another sequel to their long running monster series. In a not so subtle insult the main villain of the series is called “The Dummy”, and the rubber suit looks insanely ridiculous. The episode has the suit actor of “The Dummy” go mad, and it really utilizes all aspects of the filmmaking process. Unlike most anthology shows there are no introductions, or host segments, each episode just begins by throwing you right into the story.

Dead Of Night has the sole distinction of being the only show on this list that had an episode that actually managed to illicit fear. The series has dark undertones, and really sets up its characters well. The episode in question featured a group of rational adults at a dinner party slowing losing grip on reality as things start to subtlety go wrong. What sold the show was the competent acting, and the stupendous chemistry of the cast. Having rational people stop to attempt to logically explain their surroundings really added another layer to the spookiness. Unfortunately of the series original seven episodes, only three episodes have survived in the BBC archives. Still of the few episodes that remain its clear that a lot of skill, and scare went into this short lived production. Similar to "Beasts" there is no framing narrative.

Created by “I Am Legend” writer Richard Matheson, and executive produced by Schlock master William Castle, Ghost Story has a lot of heft behind its generic title. The series is hosted by Sebastian Cabot, the framing device boils down to the owner of a hotel explaining the spooky circumstances that happened to the hotel guests before they arrived. There are some outstanding episodes written by the likes of Harlan Ellison, and Robert Bloch. This NBC series from the early 70s is sure to give some unique food for thought long after the credits have rolled.

Instrumental in inspiring such horror classics as The X-Files, anyone who knows anything about 70s horror television knew this would top the list. Kolchak The Night Stalker is the sequel series to two TV movies “The Night Stalker”, and “The Night Strangler”. Each episode featured news reporter Carl Kolchak going up against some supernatural creature, be it werewolves, vampires, or zombies. Of the series 20 episodes, 8 were writer by the excellent David Chase, who would become famous many years later for his work on the HBO series The Sopranos. If you are a fan of X-Files or even horror television than Kolchak is a must see. Well written dialog, and really interesting scenarios (who would have ever suspected that a werewolf running amok on a cruise ship would be a good idea) there's no doubt Kolchak The Night Stalker belongs in the number one spot.