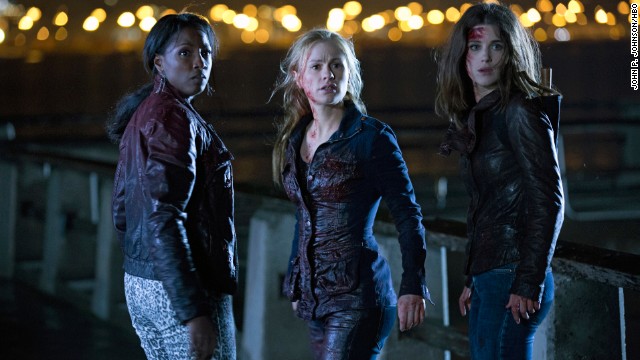 It's hard to imagine that its been 16 years since the start of the new millennium. A decade of bulky iPods, and the true beginning of high speed affordable internet. This was a decade that treated Horror fans well especially on the big screen, and is one of the few decades with more horror shows than spots on this list, so there are some very prominent series that were left off this list. Primarily Dexter, which to me always felt like a sub-par police procedural, so I opted to keep it off.

This Showtime horror series spent a lot of time obtaining the most well known directors, and writers from the horror genre. Unfortunately they didn't spend the same amount of time getting their actors. There are some interesting concepts and ideas at play in the series that make it worth checking out especially for the horror completist, but don't expect the acting to be anything exceptional. Horror greats like John Carpenter, Dario Argento, Tobe Hooper, John Landis, Joe Dante, and even Takashi Miike contribute to the series, more than earning its title.

In the 2000's everyone wanted to have sex with vampires. From Twilight to Vampire Diaries both males, and females alike were swooning over the cacophony of vampire media. Only one series had the visceral vampire love scenes fans were craving for, and True Blood was it. The plot does tackle some interesting issues, and brings more to the table than typical vampire romance fiction. For instance in this world Vampires are public, and well known, leading to a push for equal rights by the vampire community. The world True Blood inhabits is well thought out, and unique, but the constant sex scenes may be tiring for some. Based upon the book series written by Charlaine Harris.

Most horror shows involve a character slowly discovering the supernatural underbelly existing within society, so finding out about a secret world is nothing new. However The Dresden Files introduces a really fun spin on the other worldly concepts. Harry Dresden is a wizard, and a private eye. Whenever something truly strange occurs he will be the one the cops, or the public go to. The performances are enjoyable with Paul Blackthorne (Harry Dresden) being particularly delightful to watch onscreen. Based upon the series of novels written by Jim Butcher, if you are looking for a lighter show with some unique horror elements it's well worth your time.

The same show runner, and idea as Masters Of Horror just with a lot more finesse. It aired on NBC which ensured that certain elements like nudity, and profanity had to be reigned in for the cable audience. Surprisingly enough this actually improved the series as it had to focus more upon characters, and situations as opposed to copious amount of nudity. A variety of directors from Masters Of Horror return to this series, and the higher production values are evident. The series featured a better cast of actors, with Eric Roberts, Brandon Routh, Anna Kendrick, and Ethan Embry making appearances. If you can only watch one of Mick Garris's horror show this is the one that deserves your time.

If you were a fan of X-Files, and Buffy from the 90s, than this CW show about two brothers hunting down the supernatural will be right up your alley. The show begins with a serious premise, and idea but it isn't afraid to lighten up the series with some fantastic funny episodes. Horror fans will recognize Jared Padalecki, and Jensen Ackles due to their appearance in My Bloody Valentine 3D (Padalecki), and the 2009 Friday The 13th (Ackles). Their best work in the genre is no doubt this series. The only series in this list that is still currently ongoing, you can still catch the further adventures of the Winchester brothers.

The only Japanese show on the list, Garo is best described as a mixture of Constantine, and Power Rangers. The style of the effects, and the villains are very much in the vein of Power Rangers but instead of the kid friendly Super Sentai (Power Rangers is the Sentai adaptation in the west) these villains kill. The main idea is that “Garo” is a title given to those who prevent evil from affecting the human world. Any humans who witness the creatures must be executed as they have become tainted by the darkness. The series follows one girl who witnesses a horrific creature creating havoc, and the Garo deciding to keep her alive as a tool for attracting the evil to her. He slowly gains feelings for the woman, and their dynamic is the core of the series. If you watched Power Rangers as a kid, and wondered what a grown up version would look like than this series is for you.

The series blends the odd couple, with the undead. A group of supernatural beings all attempt to live together in a Flat. The series has some surprisingly impressive effects, and a really cool set of ideas at its core with a great cast of characters. The premise would seemingly blend well with episodic television, but the show has an overarching plot that links the characters together very well. An American adaptation was made in 2011, the original British series staring a Vampire, a Werewolf, and a Ghost is outstanding.

The slasher genre very seldomly crosses over with television. The odd episode of an anthology show belongs in the genre, but never had a slasher been a full season of television until this series. At their core slashers are usually relatively short films, which makes it all the more surprising that Harper's Island a show which is essentially an 8 and a half hour slasher film works so well. The series has a large cast, which ensures that one or two people can be bumped off an episode without depleting the character list. The setting, an island, lends well to a horror series given its inescapable nature. This one season show has a great cast of characters, and a compelling murder mystery at its core. Slasher fans need to give this tense series a watch.

An outstanding, albeit short look at the zombie genre, through the lens of reality TV. The series features a group of grating reality TV stars on the British version of Big Brother. As their season is nearing its end the world goes through a zombie apocalypse. Now these seemingly vapid TV stars must work alongside the shows behind the scenes staff to survive the undead plague. Gruesome death scenes, and some truly callous instances of the human survival instinct make this a funny, yet poignant look at reality television.

A 21 year old slacker discovers his parents sold his soul to the devil before he was born, and now he has to act as a bounty hunter for the dark lord himself. This show is extremely fun, and has some excellent effects. The core idea, and characters are played out really well. A comedy series with a “monster of the week” storyline works very well. Satan played by Ray Wise is one of the biggest standouts, doing whatever slightly evil vile thing he can think of. The beaucratic nature of hell is a delight, and the main character getting pushed to improve himself by the devil is an excellent touch. If you are a fan of slacker comedies, and want to see a pair of nitwits fight the hordes of hell you have to check out Reaper.