Moving into the 2012 countdown homestretch, Casey offers up one of the crew's final 10-packs.

1. The Cabin in the Woods - What can I say? This was the most fun I had in the movie theater this year, plain and simple. A great horror homage.

2. Sinister – I didn’t expect much from this, but left the theater tense and emotionally drained. That’s a good effect for your horror movies!

3. The Woman in Black – Hammer Studios is back and “Woman in Black” is a near perfect representation of the studio’s gothic greatness of the past. Daniel Radcliff’s attempt to step away from the shadow of “Harry Potter” was great as well.

4. ParaNorman – This movie was heartfelt, funny and amazingly animated. Top marks all around!

5. The Divide - A good horror flick evokes a visceral reaction in the watcher; if you walk away from “The Divide” not feeling dirty and a bit disturbed, there may be something wrong with you. 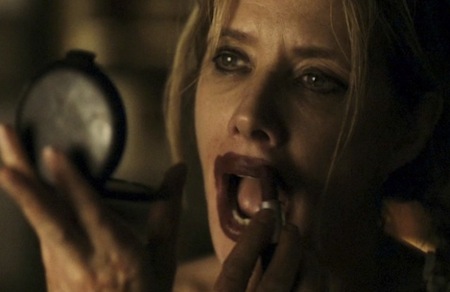 6. V/H/S – While I’m not a fan of every filmmaker involved, working in smaller bite-sized chunks played well to their strengths! A solid anthology flick, something that’s been hard to find as of late.

7. The Possession – An oddball flick for certain, “Possession” was dark and creepy in just the right spots. Besides, who doesn’t love Jeffery Dean Morgan?

8. Found - I've seen a lot of indie flicks at conventions and festivals, a lot are good, some are forgettable. It's rare that an unheard of indie leaves me feeling excited and slightly scarred after watching, such as "Found" did.

9. Abe Lincoln: Vampire Hunter – I had a long discussion with a friend who didn’t like this movie because it was too unrealistic. It’s a movie about Abe Lincoln, fighting vampires! You should know what you’re in for from the title alone; cheesy fun.

10. Kill List – My biggest surprise for the year, this is a slow burner for sure that’s hard to figure out, and quickly comes rattling off the rails and spirals out of control.

1. The Apparition - I’m pretty sure I came out of this movie dumber than I went in. Which is sad, because I think Tom Felton’s got some promise.

2. The Wicker Tree – Do I need to explain this? And I’m the guy that loves Nic Cage. Such an insult to the Hammer original.

3. The Innkeepers – My most frustrating flick of 2012. Ti West likes the smell of his own farts and this boring flick is the proof. I can’t believe I sat and watched absolutely nothing happen for 5 minutes of jump-scares at the end!