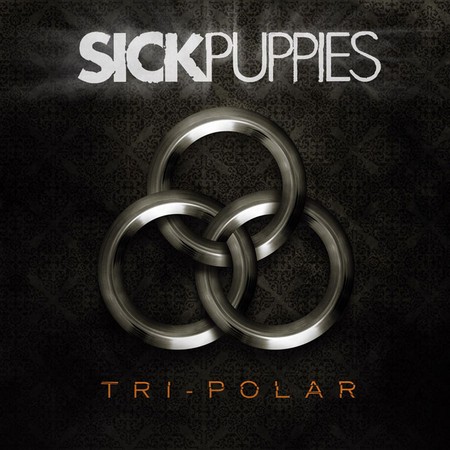 Now we’re getting somewhere. That doesn’t mean we’re there yet, but I think we might be getting closer. Enter Sick Puppies and their album “Tri-Polar.” This band from Australia is giving a good push to wedge their way into the landscape of heavy metal. I remember thinking that this whole “light metal” movement might culminate in something bigger. “Tri-Polar” is, at moments, an example of what this could become.

The startling thing about it is that the album is really just a revival of music that’s already happened. Australian bands seem to have a habit of this. Jet re-energized club rock and roll, Airbourne made us dream of a second coming of AC/DC, and Sick Puppies are trying to inject some life into the nu-metal that’s not so far gone, but with an influx of more digestible punk rhythms. The first half of the album also contains a good deal of the classic barroom brawl mentality that seems so common in Australian rock/metal.

Ranging at times from Disturbed’s “The Sickness” to Stone Temple Pilots’ “Purple” to Collective Soul’s “Dosage,” Sick Puppies show a diversity of sound uncommon in this kind of light metal. In the end, this becomes a double-edged sword as the band shows their capable range, but also fails to maintain any consistency. Each of the first four tracks, “War,” “I Hate You,” “Riptide” and “You’re Going Down,” could all be by different bands. In reality, I feel like Sick Puppies could have slashed half this album and released the remaining songs as a pretty promising EP. As it is, thirteen tracks may have been an over ambitious goal for “Tri-polar.”

Each song is short, which keeps the pace moving and prevents the music from wandering into unnecessary ideas. Still, the band finds places to cross themes within a single song, ranging at points from emotional ballad to hard-edged mosh pit fare.

“War” is the signature track of the album, and also its best single offering. The song is brutal and battering, and opens the album with a polished but visceral flourish. The album rolls into “I Hate You,” which keeps the heavy push going, but backs off on the speed a little bit. This is where the issues with “Tri-polar” come to bear, as “Riptide” can’t keep up, and instead plunges headlong in a totally different direction. All of a sudden, it’s like I’m listening to Maroon 5 on crack, with a few extra Marshall stacks. But then wait, we get into “You’re Going Down,” and I’m back to the beginning again.

Still, I think there’s more good here than bad. The pace never really stops, even if the songs stray from metal and more towards new age punk or something more radio-friendly. The irony is, even in those latter songs, the bands still finds places to inject solid rhythms and pulsing, pounding beats. “Should’ve Known Better” is the perfect example of this, as the chorus has pop-punk written all over it, but the breakdowns and verses are solid heavy metal.

Regrettably, the album falls off in the second half. Songs like “Maybe” and “Don’t Walk Away” are emotive filler and can be discarded. “Master of the Universe” isn’t about what you think it’s about (or if it is, I can’t tell,) and “In it for Life,” is loud enough, but doesn’t add anything that the album doesn’t already have better somewhere else. Throw in “White Balloons” and Sick Puppies really could have lopped off the last five tracks.

When it’s all over, “Tri-Polar” is a little too “Youth of a Nation” for my general taste, but it has a lot of bright spots. The album is a little messy, partially scatterbrained, and could’ve been a lot shorter, but there’s promise here. After all, I can’t get “War” out of my head. By the way, you remember the TV spot for "Street Fighter IV?" That was "War." Put Sick Puppies on a tour with Airbourne and I’d pay money to see it. Rent before you buy, and put Sick Puppies on your “watch” list.