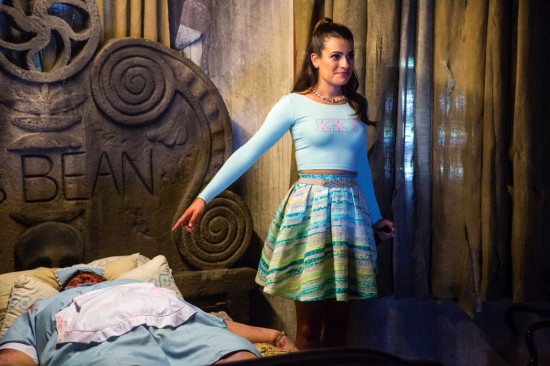 Let the Halloween episodes roll in! What better show to kick off the spooky holiday season than Scream Queens and its take on the modern "All Hallows Eve" sensibilities. The episode, this week titled "Haunted House", kicked itself off with the not so fantastical event of Chanel-o-Ween; clearly a take on the YouTube generation and their never ending desire to subscribe and thrive through view counts. Sending various packages of blood and rotting punpkins to her Instagram followers, Chanel (Emma Roberts) poses and performs in tandom with the shots of the "frumpy girls" getting their personalized gifts. While many viewers will subject this moment to judgment on its realism, it's not too far off from how youngsters react to their online celebrities. In fact, Murphy clearly has his finger on the pulse of how this social media driven society works. Of course his take on it within the Scream Queens world is stylized and larger than life, but the underlining thesis is solid. The portrayal of the frumpy girls is just as snarky and devilish as Chanel is as a character; a welcomed reference to the sickly sweet darkness that fills the void of these sorority girls.

A difficult part of the series to this point falls on the supposed lead character, Grace. It's unclear whether to place blame on Skylar Samuels as an actress or on Murphy as a writer, but her character never seems to make the presence on screen that she should. While every character around her is busy devouring every scene and chewing on the corners, Grace just feels far less interesting. Thankfully her sleuthing abilities do fortify her with some intrigue, but there will have to be more done to pull her ahead of "as skinny as Karen Carpenter in the morgue" Chanel. Pete (Diego Boneta) as a character is right on par with Grace--perhaps this explains the formula for their blossoming love. Dressing as their romantic couple from their favorite movie (How to Lose a Guy in 10 Days), Pete takes on the persona of Matthew McConaughey's Ben Barry opposite of Grace's open backed gown homage to Kate Hudson's Andie Anderson. This could have been a great moment for Grace to stand out, apart from her golden yellow gown, but the attention goes to Pete as he delivers his best McConaughey impression. Thankfully he receives a passing grade and some extra credit for his commitment to the number. The references didn't stop here though as a former Kappa House sorority sister turned trailer park informant watches Leprechaun and complains of no one just submitting to the killer's demand for gold. Tying into the mysterious birth in 1995, Grace and Pete begin to understand that their main suspect of Chad Radwell (Glen Powell) cannot be the baby since they should be looking for a girl. Grace's immediate jump to believing that she might be the sorority baby is a strange bump in logic though as her age doesn't match up with the histrionics. Putting it plainly, it would be strange to learn that Grace is in fact the baby since the motive of the killer would have a muffled focus. However, Grace is not off of the table as a suspect.

Denise Hemphill (Neicy Nash) still has her sights set on Zayday (Keke Palmer) as the killer in the Red Devil costume. Her reasoning this week revolves around Zayday's desire to be the Kappa president and push Chanel out the door. A charity event in the form of a haunted house on Shady Lane is the best way in Zayday's mind to clinch the presidency, but of course the Chanel's are two steps ahead on what will happen during the event. In one of the more memorable moments of the episode, the Chanel's pass out warning flyers of an imminent murder at the haunted house. The wry sense of humor here falls into Kevin Williamson territory as Chanel gives an obvious speech on death at parties and the convenience of using the bodies as decoration.

Surprisingly no deaths occur at the event, but the past kills of the Red Devil are all displayed as if Michael Myers stepped in and helped Mr. Red decorate. Half right, Chanel. Poor Zayday is kidnapped though which at least knocks her off the list of possible suspects, at least for now. A larger revelation of the '95 baby's past comes with Shady Lane and the shady Hag that stole milk. This mystery woman might be the key to understanding who the personified "Baby Born" is, and the answer is supposedly given when a wide eyed Gigi (Nasim Pedrad) rocks back and forth in a shady rocking chair. The bigger question though: were there really still milkmen in 1995?