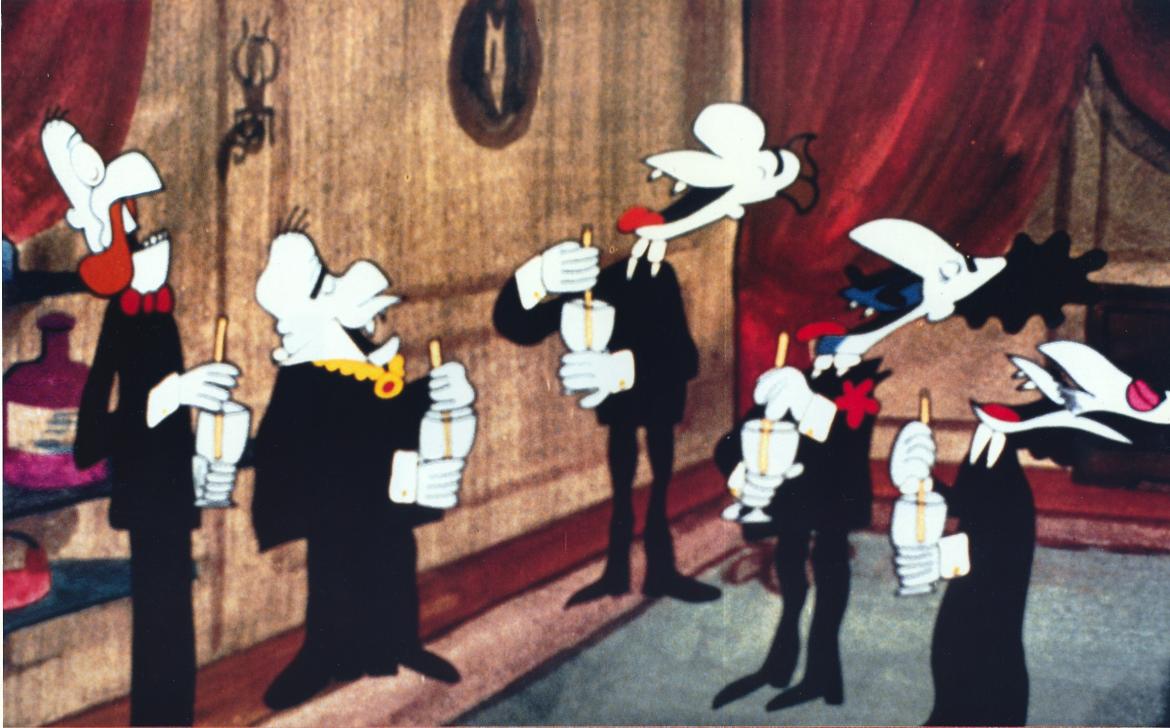 My favorite cartoons as a kid were always The Depatie Freleng shows. “The Pink Panther” which was their most famous, served as herald patch for the likes of “Roland and Rattfink”, “The Ant and the Aardvark”, and “The Inspector”. These animated shorts were all set to an odd jazz pacing that was alternately smooth and crazy. The characters said very little, often had some sort of beat-poet/hipster affect and would be both as cool as they tried to portray and hopelessly delusional about their abilities. If you were to take “The Pink Panther” splash in a little Hanna-Barbera, cut it with Ralph Bakshi’s sensibilities then set the whole thing in pre-Castro Cuba you would have something pretty close to Juan Padrón’s “Vampires in Havana”.

“Vampires in Havana” follows the story of Cuban jazz musician Joseph living in Havana in 1933. Joseph’s uncle is a disgraced vampire chemist named Werner Amadeus von Dracula. Werner is infamous for a series failed turn-of-the-century anti-sun experiments that left him a laughing stock. Those ill-fated trials still have him on the outs with the two biggest Vampire organizations in the world; The United Vampire Group of Dusseldorf and the Capa Nostra, a Chicago based mob racket that is run by the unscrupulous Johnny Terrori.

Despite having no support from the vampire bigwigs Werner has successfully rendered his sun-proofing potion and has been using the freewheeling Joseph as his guinea pig for many years. Werner has also neglected to tell Joseph that he is a Vampire. All hell breaks loose when Werner contacts The Vampire Group to let them know that the formula has been perfected and that he plans to distribute it to every vampire on earth… free of charge.

The Vampire Group sees an opportunity to capitalize on Von Dracula’s invention, quickly dubs the product “Vampisol” and flies to Havana to secure the formula. Meanwhile the Capa Nostra also head for Cuba. Johnny Terrori and his goons are out to stop the production of Vampisol because it presents a grave threat to their underground vampire beach resort business. Things get really sticky when Havana’s corrupt police Chief Machado targets Joseph, who is bedding Machado’s trophy wife to gain info for the Cuban Political Underground.

“Vampires in Havana” is pretty complex 1 hour film. Knowledge of Cuban history is not necessary but it certainly doesn’t hurt. Fortunately, most of the humor is of the universal variety and leans on the same cadence that drives the old Depatie Freleng cartoons. The best aspects of the movie are not the layered critiques of pre-Castro Cuba but rather the drop-in jokes that start non sequitur then become recurring gags.

The animation and sexual themes at work in the film make the Ralph Bakshi comparisons inevitable. These elements also stand to make some viewers less comfortable because the idea of innocuous characterizations was not a part of the crafting here. Generalized ethnic phenotypes are taken to the extreme and female characters spend as much time naked as clothed. If you are looking for all inclusive apolitical and moral content then this is one cartoon you should steer clear of.

One cannot help but wonder how “Vampires in Havana” was received by those preferred the pre-Castro Cuban realities to Fidel era Communism. It is none too subtle in it’s delineation of good and evil. Crooked Havana cops battle a well-intentioned people’s movement. Werner Amadeus von Dracula is trying to distribute his formula to the people for free but violent gangsters from America want to suppress it altogether. Meanwhile a European conglomerate looks to appropriate the concoction and exploit it for monetary gain in perpetuity. These power struggles are beamed around the world via Vampire Radio International ala Che Guevara’s Radio Rebelde’s reporting during the Cuban revolution. Not being any sort of authority on Cuba or its history it is very possible that I am missing much of the nuance here. Perhaps so much that it could even lead to a misreading of the political content; but I am happy to report that it probably doesn’t matter all that much.

“Vampires in Havana” works perfectly well as a straightforward piece of entertainment. This is thanks to a crazy set of editing rhythms that make the action swing from frenetic to subdued with near perfect comic timing and pitch. Fans of 70’s euro horror and Fritz the Cat styled mayhem should both be pleased and amused by the offerings here. The length is also a great asset to the film. A lot of plot is crammed into the running time but it is all nicely tied up by minute 68. Repeat viewings would likely yield some additional information and sociopolitical subtext, but it also works very well as a wild, one time experience. This description mimics that of all of my favorite cartoons and it creates a strong possibility that I will revisit “Vampires in Havana” at a later date.