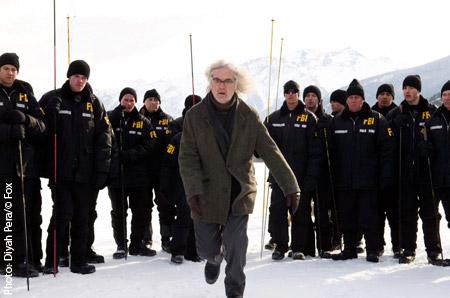 The X-Files: I Want To Believe (Movie Review)

"X-Files" fans rejoice! After a six year hiatus, Chris Carter has resurrected his brainchild from development purgatory and brought it to the big screen for a second time. A full decade after the first "X-Files" film, subtitled "Fight the Future," Carter has returned along with the series's two most important characters: Fox Mulder and Dana Scully.

Played by David Duchovny and Gillian Anderson, Mulder and Scully were "The X-Files" for nine seasons. Carter imbued the two characters with broad, antithetical personality types, and it was these dueling perspectives—Mulder's constant struggle to confront and understand the unknown, and Scully's persistent skepticism—that made them such great partners. It was this relationship, both respectful and challenging, that created the backbone of everything that worked about the show. It's also this relationship, discovered again in "I Want to Believe," that drives much of what works about the film.

I think it's important to state at this point, for the record, that I'm not "X-Files" fan numero uno. I watched the show growing up, almost every episode up through season three or four. But I never really got into the show's overall mythology, so when the Cigarette Man and the Syndicate started to push out the monster-of-the-week nutjobs, I more or less tuned out. I would catch an occasional episode, and still do at times, but I never carried the same flame for the show as I did in the early years.

That being said, much of "I Want to Believe" felt like an old, long-lost friend. When the film opens, we find that Scully has turned her powers of analysis and detection to her original profession of medicine. Mulder, meanwhile, is estranged from his previous life: locked away in a cabin where no one bugs him so long as he doesn't bug anyone else. This tacit peace between Mulder, Scully and their former employer is broken however, when an FBI agent goes missing and the only piece of evidence comes in the form of a pedophilic priest who receives visions of a supernatural sort. As much as it loathes many of the agents to do so, the FBI reaches out to Mulder, through Scully, in an effort to save one of their own.

From there, things proceed in a familiar yet rewarding fashion. Mulder is allowed to obsess once again about the unknowable, while Scully tries desperately to keep him tethered to Earth. All the while she herself must wrestle with her beliefs and her convictions. For the hardcore fans, the casual fans, and even the uninitiated, this should all be common ground. "The X-Files," at this point, has achieved a level of cultural significance that would make total ignorance of its general themes and characters virtually impossible (there was a Simpsons episode about it for God's sake!).

For all those reasons, "I Want to Believe" will be a fun ride for a lot of viewers. Like Mulder, we're given license to return to familiar ground and poke around a bit. Carter has done an excellent job of crafting a story arc that is at once accessible to all, yet rewarding in its smaller moments to "The X-Files" more dedicated legions. The ancillary characters (Billy Connolly as the priest, Amanda Peet as the young Mulder-in-training, and Xzibit as Agent Drummy) are all well cast and dedicated to their roles. All involved have done well in ensuring that the film never seems like a tribute, but genuinely feels like a reunion of sorts, albeit one with some unsettling and downright scary moments.

In walking this line, between tribute and reunion, Carter set an incredibly difficult task for himself, and one of the film's biggest failures comes in that he may have succeeded too well. For all the well-paced action and detective work on display, it is very difficult to shake the feeling that "I Want to Believe" is little more than a made-for-TV feature that leveraged its name cache to get into theaters. The film never really goes over-the-top, or anywhere near the top for that matter. Instead, there are a handful of tense set pieces that are resolved fairly quickly and without Mulder or Scully getting into any more trouble than they may have on a weekly basis in 1995.

If you'll bear with me, I'm going to undercut myself a bit. Crafting "I Want to Believe" was clearly a difficult proposition for Carter to undertake. Despite when the script may or may not have been written, "The X-Files" has been on ice for quite a while (at least in the entertainment world). The writer/director made a strong choice in foregoing all the mythology and all the conspiracy talk to take a stab at revisiting what initially drew fans to the series in the first place—a realistic handling of paranormal detective work. In that regard, "I Want to Believe" can be viewed as nothing but a success. But the result of that decision is that "I Want to Believe" ultimately feels no bigger, or grander than one of the early seasons' monster-of-the-week standalones. It may well be one of the very best standalones, but for a narrative with so much history and such as strong pool of paranormal craziness to draw from, "I Want to Believe" could have used a little more juice.

What Chris Carter probably understands is that you likely already know if you're going to see the new "X-Files." If you are, my guess is that you'll enjoy it. There's a lot to recommend, and if nothing else, the revisiting of familiar tropes, albeit with new twists and in a new environment, can be very enjoyable. If you've already decided to forgo "I Want to Believe," that's probably because you never got into the show that much. The new converts, if they come, will be those who were too young at the time to catch some of the best standalone episodes. For those unfortunate folks, "I Want to Believe" may feel like a revelation. For everyone else, Duchovny and Anderson, together again, is reason enough to buy a ticket.

The Book of Eli