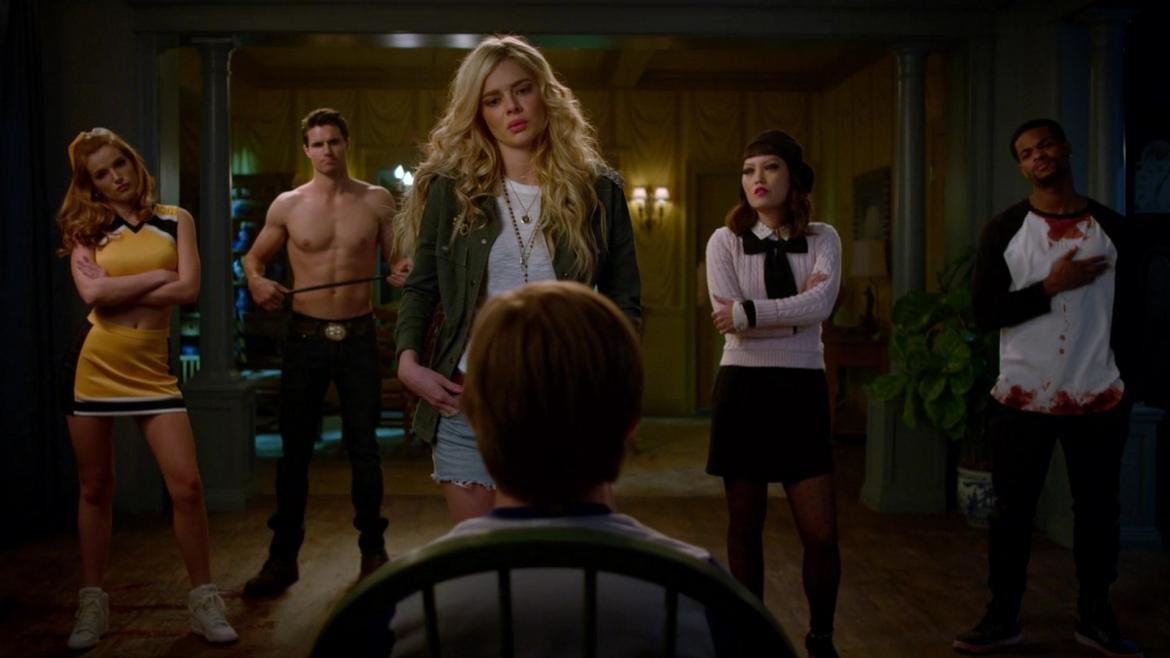 McG...the name that's more synonymous with pulpy, often generic crowd pleasing action flicks than it is for comedic splatterfests. Yet here we are, confronted with the idea that a Hollywood errand boy could have stumbled upon a nice little niche for himself. The Babysitter, the latest Netflix Original makes up for its sophmoric humor with some wicked gore and genuinely fun characters.

Even if The Babysitter ends up not being the catalyst, expect to hear the name Samara Weaving a lot more in the near future--a lot lot more. Weaving co-stars as the teenage babysitter, Bee, for the way-too-old-for-a-babysitter, Cole (Judah Lewis). In spite of the fact that he and all his peers know he's outgrown the whole 'babysitter' thing, he and Bee have struck a real bond with their time together--to the point that Cole is harboring some deeper feelings for her. However, when he stays awake to see what happens after hours things take a turn for the weird when he witnesses Bee her friends commit a human sacrifice.

Yep, the ol' "My babysitter killed a dude and might be part of a cult" yarn. McG unravels that little ball of tricks like he's been doing it for some time. Yet, his knitting skills are in need of some fine tuning. Brian Duffield's script is often obnoxiously juvenile with spurts of genuinely clever jokes and turns, while McG's usual attempts at visual flair take a backseat to lower budget gags--a toybox the director isn't accustomed to.

Weaving is still the reason you stick around for this one all the way through. The actress has all at once radiant and spellbinding in her roles--and she makes it look easy. Apart from Max (Robbie Amell)--who plays a scene stealing Patrick Bateman in training--Weaving's charms are a wonderful compliment to the irreverent over-the-top violence.

The Babysitter, while a surprising detour in McG's career doesn't always erase the memory of his lesser half-baked actioners. Bolstered by the up-and-coming Samara Weaving and her wannabe cults deranged bloodshed this is yet another notch in the win column for Netflix Originals.