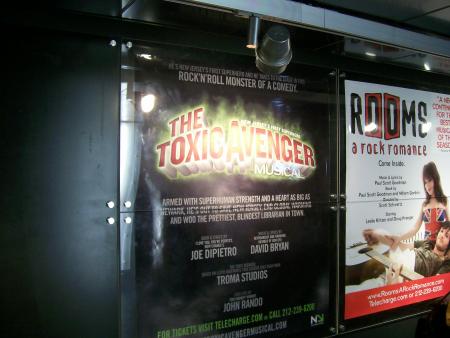 Review of Toxic Avenger: The Musical

One thing leads to another and Melvin finds his way into a giant vat of toxic goo.

Having lived in New Jersey for close to ten years now I’ve learned that its residents don’t like to be f’ed with. Sure you can throw all your big hair and bad driving jokes our way but at the end of the day there are a few things you don’t mess with. One of those things is the Toxic Avenger. New Jersey’s first superhero has been fighting the good fight in Tromaville for over 25 years now and shows no signs of stopping. Over the years he’s appeared in films, cartoons and video games. Now he’s taken the leap to the theater in "Toxic Avenger: The Musical", which is currently running at the New World Stages in New York City.

Needless to say when I first read about the play I was a little skeptical. The appeal of Troma’s work to many people is that for the most part they can do whatever they want. The majority of their films use boobs, poop and blood to fill up an hour and a half worth of film. I’m not complaining about that, but the biggest question I had when walking into the musical was could they really recreate all the things people love about a Tromaville production in the heart of Manhattan's theatre district. I am happy to report that the answer is yes, for the most part.

First and foremost the most impressive thing about the musical is that it stays true to the original theme of “The Toxic Avenger”. I like to think that a lot of this was due to the fact that Joe DiPetro who wrote the book and lyrics for the play is also a fellow New Jersian. He collaborated with Lloyd Kaufman on the production, so from the get-go he was moving in the right direction.

The main story of the production plays off of the original film but does take some defiant turns at certain points. Melvin Ferd the Third, played by Nick Cordero, is your run of the mill small town New Jersey nerd who is hell bent on cleaning up the town of Tromaville. When the Mayor catches wind of his plans she sends out her goons to take care of the problem. One thing leads to another and Melvin finds his way into a giant vat of toxic goo.

Thus the Toxic Avenger is born... and ready to clean house while winning the affection of Sarah, the town librarian and blind girl played by Sara Chase. The story is a little more fleshed out here than in the original film, but in the end the changes don't really hinder your enjoyment. If anything they helped the story move along and kept the hour and a half break-free show interesting. Really the only negative I can say about the story is that there wasn’t much in the way of inside jokes for the hardcore Troma fans. The argument could be made though that catering to the fans would alienate a majority of your average theatergoers. 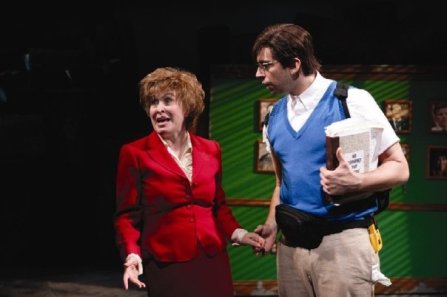 Listen up Manhattan, we know you’re stinking rich. Your bed sheets may be satin, but Jersey’s not your bitch!

As with most things of this nature, the acting can make or break a musical like this. Surprisingly it took only five actors to create the entire production. For me the star of the entire show was Nancy Opel, who played both the mayor of Tromaville and Melvin’s mother. During the song “Bitch/Slut/Liar/Whore” the two finally meet and through some cleverly placed and rather quick wardrobe changes Opel is able to argue with herself. The entire number was very impressive and the crowd was pretty vocal about their enjoyment.

Demond Green and Matthew Saldivar - listed only as “black dude” and “white dude” on the bill - rounded out the cast. Between them they played at least another ten characters, easily. The two played everything from a scientist, to narrators and even Sarah’s girlfriends. I’m more than a little uncomfortable at how good Green looked as a woman. Here as in the aformentioned musical number, the impressive ability to change costumes in only a few short moments didn’t go unnoticed.

Obviously, at the end of the day the entire show was about the music. Now, normally I am not one for a musical and I had my reservations walking into this one. But from the first song “Who Will Save New Jersey” I was sold. Being from New Jersey myself I’m used to hearing people talk down about my beloved home state, even sometimes on this very site [editor's note: I have no idea who he's talking about], but I’ll be damned if I was going to take it in a musical.

Luckily DiPetro’s roots shined through again. The music comes off as more of an homage to the Garden State rather than a bashing. A lot of this could be credited to David Bryan, who wrote the music and lyrics for the show. You might know him as the keyboard player from Bon Jovi. And as anyone can tell you, it doesn’t get much more New Jersey then Bon Jovi. Sure they talk about the toxic waste and filth but on a whole the theme is about cleaning up the state. Not to mention the musical slaps the blame directly on Manhattan for shipping their garbage across the Hudson River. “Listen up Manhattan, we know you’re stinking rich. Your bed sheets may be satin, but Jersey’s not your bitch!” Needless to say, I almost cried. Other highlights included the Mayor's seductive “Evil is Hot” and the duet with Sarah and Toxie “Hot Toxic Love”. The songs were fun and really kept things moving along, and this is coming from someone who for the most part finds musicals pretty unbearable.

So would I recommend "Toxic Avenger: The Musical"? I would say definitely. They really did a great job of making the show entertaining to both long time fans and those who aren’t so familiar with Tromaville. Just be warned that it might not be suited for the younger tikes. Why the people behind me brought their five year old son I have no idea, but he definitely seemed pretty freaked out by Toxie’s roar.

I know I was uncomfortable during the scene where the Mayor tries to have her way with the scientist to learn Toxie’s weakness. Based on the sign above, it's entirely possible the family may have taken a wrong turn and mistaken the set for the "Gazillion Bubble Show" which was playing in the next room. For everyone else though the musical should be a great time. There was enough blood and limb removal to keep me satisfied and enough humor and romance to keep my wife speaking to me afterward.

Tickets and the shows soundtrack are currently on sale at ToxicAvengerMusical.com.