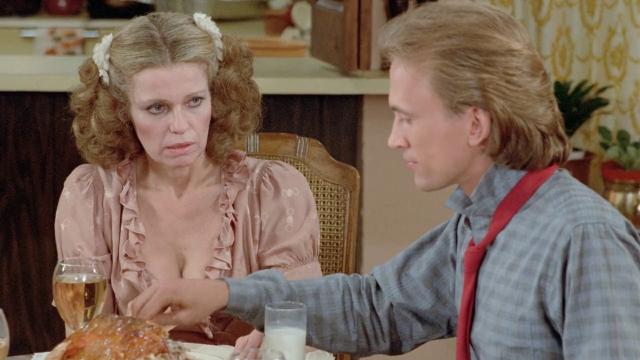 There aren’t many Thanksgiving horror movies out there, and most of the films set during the holiday range in quality from dried out turkey to overstuffed with cranberry sauce. But one film in the holiday’s horror movie lexicon stands above all the rest. Today on Primal Scream we take a look at how the seminal 1987 film Blood Rage took a machete to melodramatic psychic fracturing. As we’ll see, the film introduced its audience to all manner of questionable coping strategies and exactly how not to reveal triggering information to your patient's family...especially when a family member is dressed like an adult doll.

This article contains a brief mention of self-harm in its concluding paragraph.

Directed by John Grissmer, Blood Rage opens in 1974 as twin 10-year-old brothers Terry and Todd are taken to the drive-in by their mother, Maddy (Louise Lasser). Maddy also happens to be on a date and while the boys sleep in the back of the station wagon, Maddy makes out amorously with her beau. Along with ignoring her children -- who escape the car while she isn’t looking -- Maddy’s actions show her propensity to engage in subpart & unhealthy parenting practices.

As the boys wander through the drive-in, Terry steals a camping axe from one car and spies on a young couple having sex in another -- both abnormal and problematic behaviors for a child to display. When the couple catches him, Terry kills one of them and then immediately frames Todd for the crime. In this sequence we can see that Terry is well on his way to a diagnosis of Conduct Disorder while also exhibiting beginnings of Antisocial Personality Disorder. Let’s not dwell here too long though. The movie’s got teens to murder!

The film then jumps to Thanksgiving Day ten years later as we find Maddy going to visit Todd (Mark Soper) at the locked mental health facility where he has resided for the past decade following the crime. Maddy, who appears to be in her early to mid-40s, wears her hair in stylized doll-like curled pigtails along with a frilly pink dress. Her outfit continues to telegraph -- nay, shout from a mountaintop -- her immature and unbalanced mental state.

Maddy meets with Dr. Berman (Marianne Kanter), a therapist Todd has been working with for at least several months. In voiceover, Dr. Berman reveals that Todd has finally opened up and told the true story of what happened that night at the drive-in. Dr. Berman shares that this is her first meeting with Maddy, and then, without knowing Maddy at all, she discloses this highly shocking information to her. It is not standard therapeutic practice to give charged information like this to family members of your client that you’ve never met before, especially on family holiday, as this can lead to the situation spiraling out of hand.

Maddy reacts poorly and exhibits signs of emotional & cognitive dysregulation in the face of this news. Dr. Berman then unwisely decides to add Todd to the mix and brings him in to tell his mother the truth himself. Dr. Berman shows a lack of concern for the emotional safety of Todd in her decision to bring the two family members together at this point. While Maddy defends Terry and voices her desire for a “big happy family,” Todd smashes the pumpkin pie Maddy brought him, flinging it at the wall. As orderlies drag him away, Dr. Berman continues to exhibit her poor clinical judgement as she states, “in spite of the dramatic nature of today’s outburst I consider the setback relatively minor.” This psychologist couldn’t disagree with her more.

Maddy returns to her apartment to host Thanksgiving dinner with Terry and her soon-to-be-revealed fiancé Brad (William Fuller). As Terry plays football with visiting friends it is revealed that Maddy has also invited new residents of their apartment community -- and complete strangers -- Julie (Jayne Bentzen) and her mother. Inviting people you’ve never met before to Thanksgiving dinner, as well as wearing a low cut dress that highlights her cleavage, shows Maddy’s poor boundaries with others. In a show of antipathy and cruelty, Terry actively flirts with Julie in front of his girlfriend Karen (Julie Gordon), who becomes understandably miffed by his behavior.

Before dinner begins, Maddy and Brad announce their engagement. At the announcement Terry barely conceals that he is filling with deep seated rage at no longer being the apple of mother’s eye. During dinner, Maddy gets a phone call from Todd’s mental facility informing her that he has escaped. Todd’s behavior here was likely spurred by the “relatively minor” setback in the family therapy session earlier in the day. Here we discover Maddy refers to the mental facility as “Todd’s school,” showing her lack of acceptance and denial around her family situation. Maddy informs Terry of the news and asks him to not inform their guests so as to not spoil Thanksgiving dinner. In a resounding show of anti-social behavior, Terry immediately turns around and announces his brother's escape.

It is then that Dr. Berman and an orderly from the facility, Jackie (Douglas Weiser), arrive at Maddy’s apartment. Brandishing firearms, the duo want to search the apartment community for Todd. (Now, it is a little known fact that therapists often conduct armed searches for missing patients as Dr. Berman does here. If I had a dime for every time I’ve done this I would be quite wealthy by now!) Dr. Berman and Jackie inexplicably decide to split up, and it is around this same time that Terry decides to revisit his murderous side and begins killing the other characters off one by one, often quite gleefully. He even attempts to murder his girlfriend Karen, who grabs and protects the infant child of one of his other victims.

As Todd launches into his murder spree, Maddy decides to use the healthy coping skill of getting wine drunk alone in her apartment. As the night wears on, she eats Thanksgiving leftovers on the kitchen floor, spills all her family secrets to a telephone operator, and finds evidence that Terry just might be the murderer Todd told her he was. While his twin brother and mother are handling their stress about as well as we’ve come to expect, Todd returns to the apartment community and wanders around meeting the other characters who often confuse him with Terry. Todd eventually finds Maddy passed out in her hallway, and while putting her to bed, she wakes, believing Todd to be Terry. She then kisses him goodnight with a long mouth-to-mouth kiss leaving Todd visibly shook. Maddy, we got to talk about boundaries.

As the murdering, stalking, and mistaken sibling identities reach a fever pitch the characters find their way to the apartment’s pool. It is here Maddy shoots & kills Terry and then has an emotional reunion with Todd. Maddy holds Todd close as she makes an intensely emotional apology to him, telling him that she wants it to be just the two of them for the rest of their lives (again, not a normal mother/son dynamic at play). But then it is revealed that she thinks Todd is Terry, meaning that she ultimately wanted to shoot and kill Todd but accidentally confused the two. Todd begins to shout, “I’m Todd!” over and over again, Maddy eventually joining him in his wailing before ending her life via suicide by shooting herself in the head. The film leaves Todd, Karen, and the baby she saved together by the pool. Hopefully they won’t use this opportunity to trauma bond and form an inevitably dysfunctional family unit. Thanksgiving is a family holiday, but they should keep themselves out of that.