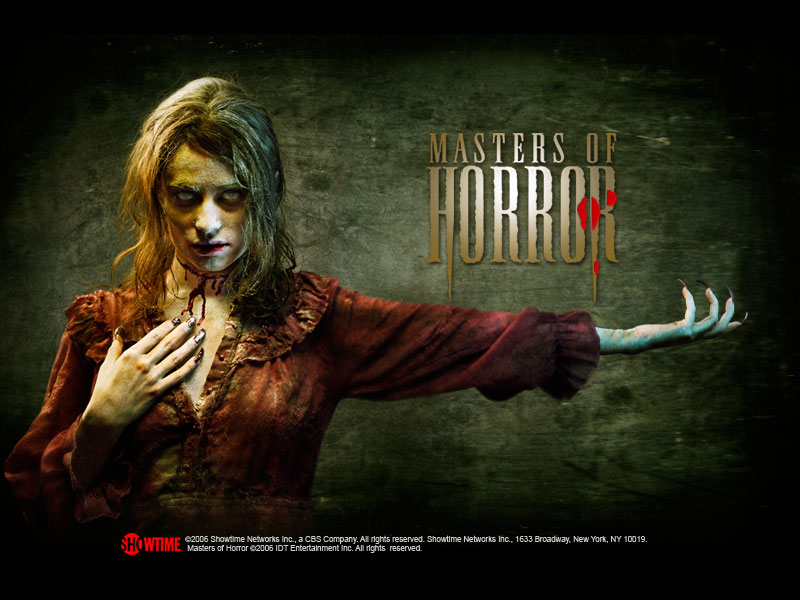 While the show’s quality may have been erratic, Masters of Horror represented one of horror’s only remaining forays onto mainstream television. So when news hit a little ways back that Showtime was giving it the ax despite the show’s decent performance with viewers, it could be viewed as nothing short of a solid blow to horror fans everywhere. But now, with the news that Masters of Horror will be back under the Lionsgate banner, time has come for everyone involved to stop pussyfooting around and live up to the show’s moniker.

Like many horror fans of my generation I grew up watching horror anthology programs. We had Monsters, Tales from the Darkside, the Outer Limits, and the granddaddy of them all, Tales from the Crypt. These shows weren’t always scary—sometimes they were downright ridiculous—but they were there. Slowly, for any number of reasons, these shows started getting phased out. These days, unless you’re lucky enough to get NBC’s Chiller channel through DirecTV, all of these programs are at best relegated to the DVD shelf, and at worst exist only in memories.

Into this vacuum stepped Mick Garris, a writer-director who built his horror bonafides on the back of several Stephen King adaptations, with a new anthology program on Showtime. Called Masters of Horror, early marketing for the show made it sound like a horror fan’s wet dream—13 one-hour episodes, each helmed by a different horror director. Showtime positioned the show as the spiritual successor to the anthology programs of old, only meaner, grittier and, well, scarier.

And at times, it was. Coming out of the gate with Don Coscarelli’s Incident On and Off a Mountain Road, the show set a high bar that it would often fail to live up to. Pick Me Up, The Black Cat and Right to Die also hit some strong notes and were among the best of the episodes that I had a chance to watch. However, when an episode really bombed—whether from uneven direction, poor acting or just laughably poor scripting—it was a truly horrific experience.

There’s talk of directors hamstrung by tight production schedules and skinny budgets, all of which sound like reasonable and realistic complaints. More often though, the show’s real failures emanated from the artificial constraints created by Garris and Showtime. A one-hour format virtually never seemed appropriate. Occasionally, episodes ended feeling abbreviated, but the opposite was just as often true. Tales from the Crypt, arguably the best of the horror anthology shows, played much tighter at a half hour. There the scares were packed into a brisk plot that often culminated with a nice little twist.

Pacing wasn’t the only problem for Masters though, as the scripts directors had to work with often times seemed at odds with their talents, or sometimes, just plain odd. Each director was allowed to choose from a group of scripts previously selected by Garris, which no doubt left some directors dealing with material they weren’t entirely pleased with. More than two decades before, HBO’s horror anthology, which ran for 7 years and 93 episodes, had the benefit of a bevy of pre-existing horror material culled from EC Comic’s Tales from the Crypt, Vault of Horror and the Haunt of Fear runs from the 1950s. By and large, these classic stories were perfectly suited to a 30 minute timeslot.

While the new iteration of Masters will likely continue to come in around an hour, the early buzz is that directors will be allowed to bring in their own material or suggest something to work with. This should add a level of license previously missing from the show. Free to explore topics that they find compelling, directors shouldn’t turn out as many real clunkers as we’ve seen in the past.

Even with Masters’ home at Showtime apparently dead and buried, the move to Lionsgate could mean a real improvement in the quality of the program. Few other companies can lay claim to as many legitimate horror films over the last few years. From small surprises like High Tension and Hard Candy to the Saw and Hostel films, Lionsgate has earned its horror rep by putting quality films in theaters, and with two solid TV offerings (The Dead Zone and Weeds) already on the air, they’ve already shown that the small screen presents few challenges they can’t handle.

So far we’ve gotten two touch-and-go seasons from Masters of Horror, which was already more horror anthology goodness than we had in the years leading up to the show’s premiere. Right now though, there’s reason to be cautiously optimistic that this 3rd season can be the strongest yet. Garris has shown that he’s got an idea of where he wants to go and with Lionsgate on board, a clear upgrade over Starz/Anchor Bay, the stars of the Masters of Horror series, that is the directors, will have few excuses. This season’s lineup of directors will have every chance to flash, as the Crypt Keeper might say, their terrifying talents and bring all manner of ghastly ghouls back to television.