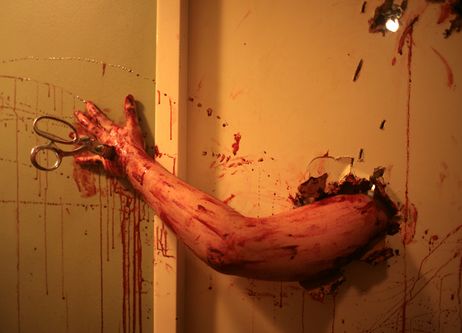 Here at Bloody Good Horror we believe that the last 10 years have been pretty outstanding when it comes to horror. Yes, we've been blessed, and to commemorate the decade that was, the nine contributors here at BGH have each compiled a list of their 25 favorite films and five least favorite films from the last ten years.

We'll be rolling out a pair of Top and Bottom 5's for the next couple of days as we work our way up to the grand-finale: a scientifically calibrated composite list representing the combined horror love of the entire BGH staff. We're confident that it's the finest list of horror films ever put together. So stay tuned, and until then, enjoy the personal picks of the BGH crew. And by all means, let us know how you feel in the comments.

2. Let the Right One In
In a list of my top 5 romances of the decade, this movie would take the prize. It's a haunting and sweet tale, wonderfully shot in an environment that sometimes feels as distant as the moon.

3. The Descent
Perhaps the definitive horror film of the decade with respect to genre mechanics and payout. Feels like "Alien" for a new generation, and I'd be surprised if it doesn't have the same cache in twenty years.

4. Sweeney Todd: The Demon Barber of Fleet Street
Almost without exception, I dislike musicals. "Sweeney Todd" is one such exception. Tremendous performances, gorgeous design work, and a sustained directorial vision make this film.

5. Pan's Labyrinth
Like "Sweeney Todd," here we have a uniquely talented director tackling an ambitious script with gusto. The contrasts of fantasy and nightmare create a powerful emotional core that sucked me in from the opening.

1. Diary of the Dead
This was like the cancer of all bad films. It metastasized in my brain and continues to cloud my thinking on Romero. Not only did he make my least favorite film of the decade, but I'm now wondering if I need to reevaluate his other efforts.

2. Halloween 2
I'll leave it to Eric to more full-throatedly take on the "Halloween" remakes. It was the lowest rating I've ever given a film for review, a distinction unlikely to be challenged for some time.

3. Quench
Almost feels unfair to list this here as it was a no-budget indie I caught with Casey at HorrorHound Indy, but it was just that bad. My hope is that we might start a "Troll 2"-esque campaign to enshrine the painful awkwardness that is this entire film.

4. The Eye
Of all the boring, emotionless, and ultimately pointless Asian horror remakes, this was easily the worst. It's not even entirely clear to me if Jessica Alba was fully conscious during filming.

5. Feast 2: Sloppy Seconds
Even by it's own, demented standards, this film felt like a flabby, incontinent mess. Unfunny and illogical in a way that I just couldn't forgive.

1. Shaun of the Dead
I have the attention span of a three-year-old and I can still sit down and watch this move over and over again. It's funny as hell and still manages to throw in a few good scares.

2. The Descent
I missed the boat on this one and didn't see it until it had already been out on DVD for a while. Loved the idea and they did an awesome job of making you feel claustrophobic.

3. The Strangers
This should be in everyone's top 5 if only because of the extreme use of Merle Haggard. I had "Mama Tried" stuck in my head for weeks afterward. On top of that, my wife still mentions how frightening the premise of the film is out of the blue from time to time.

4. Freddy vs. Jason
Maybe not the best movie of the past ten years, but goddamn it if I wasn't happy as a pig in shit when it finally came out. I got so excited when Freddy and Jason finally squared off that my wife's hand still hurts from me squeezing it.

5. The Mist
I love this movie for the ending alone. I liked the entire thing and the whole cult aspect was pretty damn freaky, but the ending will make you miserable. I think I just walked around and sulked for the rest of the weekend after watching this.

1. Quarantine
I can't think of any other film where I've wanted to see the main character get killed more than this movie. After an hour and a half of crying and sniffling I found myself rooting for the zombies.

2. Cloverfield
Another one where I may have actually enjoyed the experience if the asshole holding the camera wasn't such a dick. Do yourself a favor and watch "Cleavagefield", it's a ton better.

3. The Devil's Rejects
Holy freakin boring Batman. Awful on every level. I have nothing against Rob Zombie, but this film made me hate his face.

4. Let the Right One In
I realize I'm walking on sacred ground now, but I just don't get this movie. Maybe I'm stupid, I don't know, but man I hated this, sorry everyone. I thought "Superbad" blew also so what do I know.

5. Saw
I'll admit I haven't hated any of the sequels, but the first one was so full of bad acting that I almost had to turn it off. Danny Glover, where did we go wrong?