Searching for Zero with Liam Cormier - A Discussion with Cancer Bats

Emerging again from their darkened cave north of the border, the Cancer Bats have dropped "Searching for Zero" on the world, a cacophonous assault mixing hardcore, metal and good, old-fashioned doom in new and intriguing ways.  We sat down with vocalist and ideaman Liam Cormier to talk about this new record, his band and the groups singular love for Black Sabbath.

D.M: What makes “Searching for Zero” different from your previous records in your mind? What do you want fans to take away from it, either musically or thematically?

LIAM CORMIER: I think the biggest thing people will take away is that this album is way more raw than any of our releases to date. The production is way dirtier and crazy, where the whole goal was to make this album sound like a crazy basement show. Vocally I'm screaming harder than I ever have before and all the themes are as real as we can make them on this record to just drive everything emotionally. Boil that all down into thirty-three minutes and you've got “Searching For Zero. “

D.M: There was talk about how you wanted this record to blend all of your previous material into this one album – was that a conscious goal of yours, or did it just come about in the writing?

LC: We definitely looked at this album like we do with our live sets. Like, why do we still love playing certain songs and what makes for a great set. We want our album to have that same type of flow. So we look to our own songs as that type of inspiration and vibe to set the tone of how we'd start writing for a record.

D.M: Some of the press material in advance of the record talked about your desire to incorporate more of your favorite influences – who are those and how did it influence your sound for this record?

LC: We're all huge fans of music and we try and incorporate as many heavy genres as we can when writing songs. Like having the punch of a Black Flag song go into a crazy stoner style break down like CrowBar and have Murder City Devils guitar melodies over the top. We'll try to take inspiration from as many places as we can.

D.M: This particular album cycle took just a little longer to produce than what’s typical for Cancer Bats – was there something extra you wanted to make sure was right before the album was done?

LC: We really didn't want to rush this album and wanted to make sure we were giving all the songs enough time to really figure out what we wanted to do with them. Also admittedly we really wanted some time at home with our friends and family and didn't mind taking the extra time. [laughs]

D.M: As the band progresses and more and more elements are refined and added to the mix, does the band still feel the same connection to the hardcore punk that fueled your early works?

LC: I think we'll always have that connection to hardcore in everything that we do. We grew up in hardcore and that's how we still approach everything. Even though some songs might not sound it right off the bat, they all come from that mentallity.

D.M: One of your hallmarks as a band is your big hooks, generally brought on by giant, accessible riffs. How, when you’re writing, do you know you’re uncovered another one of those? What is that process like?

LC: I think we know a riff is solid when we all leave practice and have it stuck in your head [laughs]. We all had the main riff for True Zero stuck in all our heads so hard, we knew it was going to be a total banger. 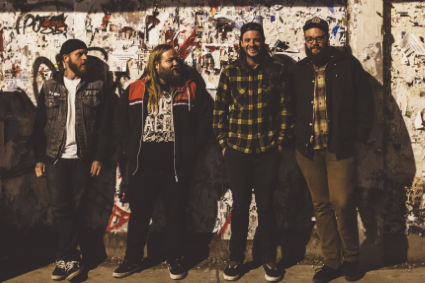 D.M: Your records concern themselves largely with struggle and gloom, but your on-stage persona and the videos you shoot seem more light-hearted – is it hard to balance those two things?

LC: I think that's really what life is, dealing with all of the heartache and gloom and then getting to release all of that negative energy into something positive. I feel like everyone in hardcore punk and metal are so laid back because they get to release all of their aggressions on a daily basis. Head banging and screaming every day is the best therapy I could ever think of.

D.M: Speaking of, your videos are a big piece of your presentation, where does the inspiration for those come from? Who generates the ideas?

LC: We love making videos and came from the golden era of the music video, so it's always been important to us to come up with solid videos that would live up to that era we took so much from. Lots of times they'll just be silly ideas I come up with and will get the director to run with it. Lots of times I have the idea for the video as I'm even writing the song. I already had the video for “Road Sick” figured out before I sang the demo for that song. We've also been really lucky to work with some great directors, DP's, editors and tons of crazy talented people who all work way too hard to make our videos amazing.

D.M: Who is it more fun to be – the Cancer Bats or Bat Sabbath?

LC: I would say Cancer Bats because I'm less worried about forgetting the lyrics. But then again in Bat Sabbath I get to wear a cape. I guess it’s a tie [laughs].

D.M: A few years we did a huge project asking musicians the following question, and I’m curious to hear your answer – what is your favorite Black Sabbath riff? Not song, but riff. If you have a few favorites, that’s fine.

LC: “Symptom of the Universe” has the most bad ass riff ever! Sadly we don't cover it as often because no one knows it.

D.M: Lastly, do you have favorite horror movies? If so, which ones and why? What do you look for in horror and have you ever taken musical inspiration from a horror film?

LC: My favorite horror movie has always been “The Shining.” I love how bizarre that whole movie plays out and just builds tension until the very end. Also nothing creepier than kids, like the two twins in that movie are just so classicly weird. The whole things is great. I love a movie like that that has that same feeling and builds the same emotion every time you watch it. You know how the movie ends but the way its shot, the acting the whole vibe of it still hits you. I think of that in the same way with records. When a band pays attention to all the details and has that vibe the whole way through an album, every time you play it you'll be drawn back to those same emotions. I think that kind of thing is amazing.

For more information on Liam Cormier and the Cancer Bats, check the links below: