Confessions From the Road

We've all been to concerts, seen the splendor of our favorite bands, and walked home happy. Behind those pressed, clean and/or theatrical experiences, there lives an entire society of road crews, bus drivers, long hours, bad food, managers, technicians and venue staff who make all that possible. Pedro Rodriguez just got off the road, and is heading back out in November for another grueling experience. In the meantime, I got to share some words with him about touring, Dimebag Darrell, horror movies and venues across our great country.

So, you were on tour with DevilDriver, Kittie…
Kataklysm, and Misery from Long Island, NY.
Now, explain to people who might not know, what’s life on the road like?
It’s kinda like camping, but camping in different states every day
It kinda gets romanticized—It’s this life on the road—
Naw, it’s tough. The reality is like sometimes you get to your venue a little bit early, and you won’t be able to load in, so you have to fend for yourself and find where you’re going to eat. You don’t even take a shower, sometimes you have to hold your pee in for two or three days, if your septic tank on the bus is filled, or there’s no water in the bus because you didn’t hit the flying J. So there’s a lot of crap that goes on on tour that not a lot of people see.
Is it still worthwhile?
It’s worthwhile it’s that’s your main passion and that’s what you wanted to do. But if you’re one of those high school or college garage bands that’s like “hey, we’re gonna get signed, we’re gonna go on tour, and life is gonna be good,” no. You’re gonna be up for a wake-up call.

I’m used to it because I’ve been out before on tours. Pretty much, it’s like you gotta prepare for the worst. If you get lost, I had my Blackberry on tour, there were several times the GPS on the tour bus got screwed up and sent us somewhere that the venue wasn’t, I had to look it up and was able to find it. You have to be boy scout-ish.

Do you find that the venues you go to across the country are accommodating to the performers? Or do you have to fight for everything you get inside the club, too?
Yeah. It depends on some of the venues. If the writer says “You’re getting this,” and they try to screw you over and not give it to you, you have to say “no, this is what our contract says, this is what The Agency says.” The Agency [Group], for people who don’t know, is this big corporation that handles all major tours. From Godsmack down to even classical music, they do all the tour itineraries and stuff.
And they handle all your publicity?
Yeah.
So essentially, while you’re on the road, you’re working for The Agency.
Yeah, and you’re working for whatever label you’re signed to, major label, whatever.

[Touring is] rough because you have to be on point ninety-nine percent of the time. From the start of loading to sound check to after you perform, you get a little bit of time to party, but you have to watch what you do and what you say. It’s weird.

As a result of constantly going out on these tours, do you find you feel at home just about anywhere? Is wherever you are home?
Where I am is home. It’s like “Wherever I May Roam.” I could be thrown anywhere, and I will find a way to have a place to sleep. There was a time on tour, I got locked out of the bus and out of the hotel room, and I fell next to the hotel swimming pool in a lawn chair.
What are the differences in the fans in the different parts of the country? Or are the groups of metal fans throughout the country the same everywhere?
It’s strange to explain it. Our second night on tour was in London, Ontario, which is where Kittie and Kataklysm are from. All the fans there were really responsive. One of the bands on the tour package was Hostility from California, and Misery is from Long Island, but the fans did their homework. When they came in, they started yelling “dude, we heard you on Sirius Radio!” But every city had its own crowd, response to some people were cool, and some of them were just there to see Kittie and DevilDriver. Some days were hits, some days weren’t.
What was your best night?
London, Ontario and I want to say Dallas, Texas. We played at this place called Trees, it was an amazing venue. The support beams in the place were made to look like trees, and Dallas definitely brought it.
What was the worst show? Did you have a night when nothing went right?
Yeah, that was Peabody’s in Cleveland, Ohio. The venue itself is made out to be an awesome venue because it’s right by the Rock and Roll Hall of Fame, but it was messed up because they had another side stage that we didn’t know about, and then put on their itinerary, so that one of the tour package bands is playing while a local band bought time to play alongside and is playing at the same time. So the up and coming bands like Misery and Hostility that don’t have a following in these cities [lost out] because someone’s favorite local band was playing. So, the Cleveland show was the first night I decided I was going into the pit and starting a mosh pit, that’s how bad it was.
So it sometimes falls on the road crew to make sure that the show turns out well?
Yeah, sometimes. Then, it wasn’t a bad venue, but it was a shocking venue to play was Alrosa Villa. When I saw that on the itinerary, it was a lot of mixed emotions. I was happy we were playing the venue, because c’mon, it’s Dimebag, and he’s a metal god. And it was more creepy like going to a haunted house where you knew someone passed here. But that night, Dez from DevilDriver sat all the dudes down and he said “look, let’s not think about the past and what happened, let’s make this night a memorable night, and dedicate every set to Dimebag.” That was by far the first awesome show we had. It was the third day into the tour, the crowd was amazing, and everyone at that venue treated us like were family. 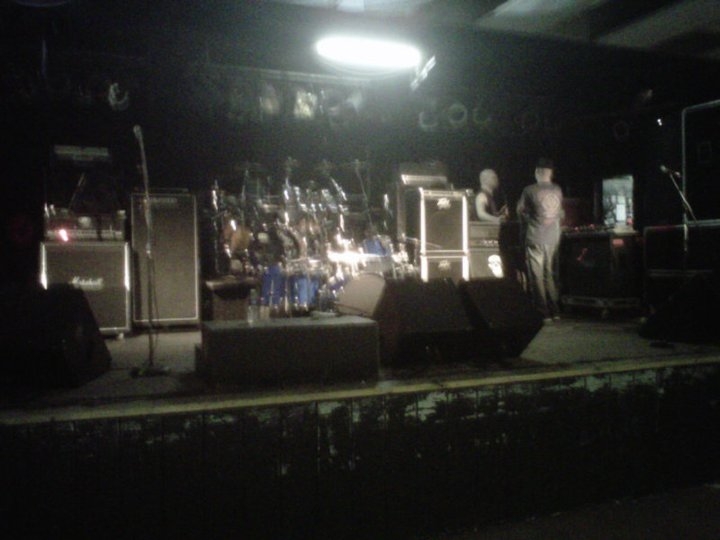 Describe the memorials that they have set up there for Dimebag.
Breathtaking. I was strictly in awe. As soon as you walk in to load in, there’s a spray painted memorial saying “in memory of Dimebag.” And then, on the bottom of the door, “Rest in peace, Dime.” The owner of the venue said “hey, if you want to see something else, go around in front,” and there’s this rock that says ‘Dime’ on it, so we went and saw that. Even on stage, there’s a little mini memorial set up for him as well. He’s truly missed and it was an awesome opportunity to be there, because not everyone can say, “I was on the stage that Dimebag was on before his last [show.] 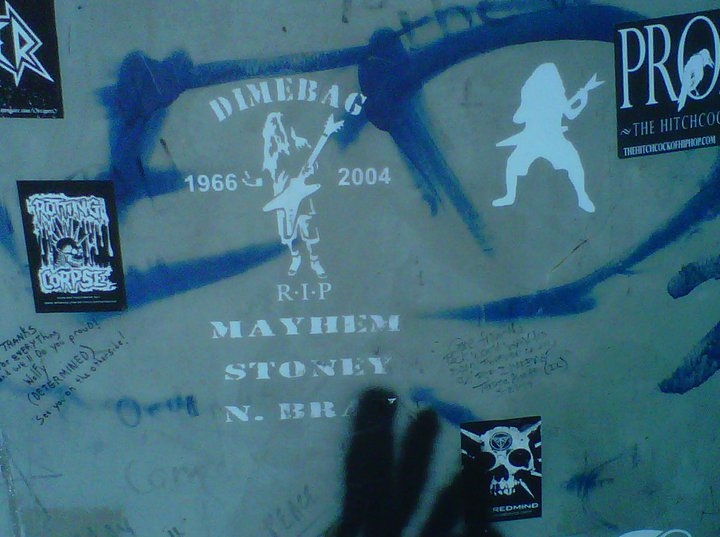 At that show I got to meet the author of the guy who wrote the book [“A Vulgar Display of Power: Courage and Carnage at the Alrosa Villa”] and he was telling me about his experiences with the band.

I hear you know something about Johnny Cash…
Yeah, that was awesome. I can’t say the name of the lady, but it was in Cleveland, at the Rock and Roll Hall of Fame. Johnny Cash’s tour bus was there. It was just me and John from Misery, and we start taking video of the tour bus. I got up to her, and I’m like “hey, what can I do so I can sit in the driver’s seat?” And she said “It’s just you, right?” And I said “Yeah, just me and John here,” and she said “no problem,” pulls the curtains, puts a ‘be back in ten minutes’ sign in the window and says go up. She let me sit in every part of the tour bus. I have a picture of me in the driver's seat. 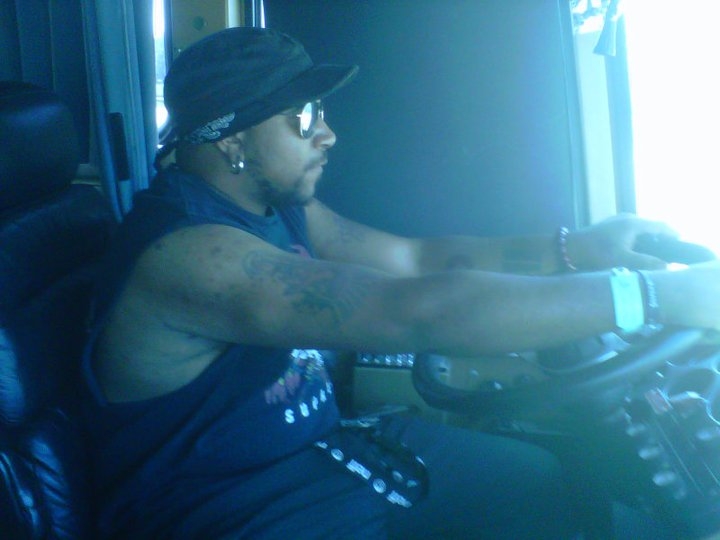 You spend a lot of time on the bus. How do you while away the hours between cities?
Sleep and a lot of drinkin’. A lot of drinkin’.
Movies? I know usually between stops, bands make a movie run. Are horror movies popular?
The guy to talk to on the tour was John Miller from DevilDriver. This guy is a humongous horror fan. Outta nowhere he’s just start talking about horror movies.
What were the favorites among you and the bands?
Me and John Miller love the Halloween series, and Texas Chainsaw Massacre. Those are awesome. We’d talk about Japanese horror like Ichi the Killer, Robogeisha and stuff like that. John has a humongous Jason Voorhees tattoo on his forearm.

Seems going out on a tour takes dedication, patience, adaptability and the ability to hold both your drink and your urine. I'd like to say a quick thanks to Pedro for both giving me a minute of his time and supplying me with his pictures from the road. Much appreciated.