Brooke Lewis has become a familiar, fetching face on the independent horror scene over the last 5 years or so. Producer and Actress, as well as the Director of a hit web-series ("Ms. Vampy"), Brooke took some time out from these roles to let us know what scares her most, to give us all a little glimpse into her origins and to share the fruits of her past-life as a dance-hit dynamo.

1. Tell us a little about your background and how you first caught the horror bug.
I was the kid who would sit in front of the TV and talk to the characters on the show, as if I were on TV with them! I was also obsessed with Dracula and vampires at an early age (ya know, before I knew I was one! :). Although I was a huge horror fan as a kid, my earlier acting work was definitely more mainstream. I was singing and dancing from a young age, which led me into musical theater, which led me into comedy in New York and I performed in TONY N' TINA'S WEDDING Off-Broadway for 3 years. This led me into edgy NY indie films from drama to comedy to mobster movies to TV pilots. I soon took off to Hollywood to pursue more TV stuff. I landed a low budget horror film and was hooked! I started Philly Chick Pictures and partnered with larger production companies to create a few horror/thrillers and have been fortunate to work in the horror genre ever since.
2. Can you give us your 5 favorite horror movies?
I LOVE me a good old school 80s horror film like TEXAS CHAINSAW MASSACRE, FRIDAY THE 13TH and PROM NIGHT. I also love smart movies that scared me as a kid like THE SHINING and AMITYVILLE HORROR.
3. Are there movies that go too extreme in content for you or is there no boundary too far?
I am not a fan of movies that are gratuitous without a purpose! I am pretty accepting of content that pushes boundaries when it makes sense to move the story or ignite emotion in the viewer. As a woman, I am not a fan of nudity just for the sake of boobs to sell a film! If there is a tasteful nude scene needed to make a point, I am all for it! Another great boundary example is THE HUMAN CENTIPEDE. I mean, it does not get much more disturbing than that! But, the film was so well done and well directed that I was affected for weeks after watching it! 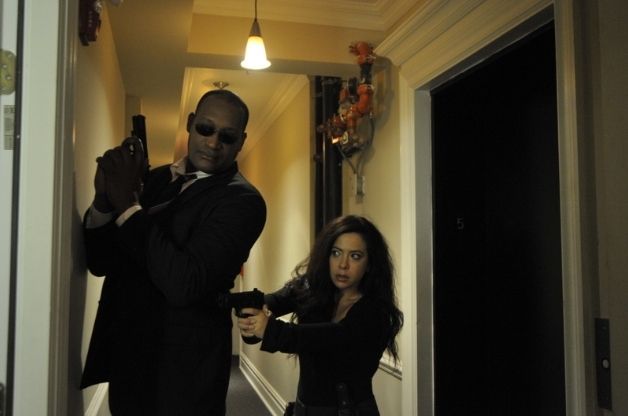 4. If you had to name just a couple of your films to help viewers get started watching your film canon, which would recommend?
Horror- MS. VAMPY (web series); KINKY KILLERS; iMURDERS; SLIME CITY MASSACRE; DAHMER VS. GACY
Other- AT THE SINATRA CLUB; BREAK; GERALD
5. The small-budget independent horror realm can make for some interesting stories, what is the most outrageous thing you've been asked to do for a film and did you end up doing it?
I have been pretty lucky with the horror films I have been offered and chose to do, as they were all around the $500K to $1M budget range, so they were able to afford proper crew, craft service, union, etc...but, I will share that recently a horror director contacted me, offered me a role and amped me up about a project that I got super excited about. I soon came to learn that he had no financing, no real production crew, no script and was holding auditions in his apartment! Needless to say, my managers and I passed quickly and I did not end up doing it!
6. Why is small/micro-budget horror cinema important?
I feel it is hugely important, because it creates the opportunity for artists to express themselves and work their craft! My only wish is that micro-budget filmmakers would do their due diligence and learn the business of filmmaking, as well and really take classes, workshops and get set experience to hone their craft before doing it!
7. Can you tell us a little bit more about your recording career?
LMAO!!! There is not much to tell, other than I was a "one hit wonder" with "Get Me Off Your Mind" many years ago when freestyle music was popular! Let your readers check it out for themselves and feel free to laugh :)
8. What is one thing that your fans don't know about you that you'd like to share?
I am rarely alone, but often lonely. I am afraid of dying alone.
9. Are you done with Ms. Vampy?
Are you kidding? I've only just gotten started with Ms. Vampy! :) And, remember, vampires live forever ;) After the web series was such a success in 2009, we did a development deal and created a Halloween Family feature titled VAMP IT OUT. I am, however, taking her in a different direction and targeting the tween and teen audience. In fact, we just wrapped her new web series titled MS. VAMPY'S TWEEN TAWK, TEEN TAWK & IN BETWEEN TAWK. Ms. Vampy is back to inspire tween and teen girls in a "tawk" show format, which covers issues that these girls are faced with today. Topics that will be discussed include: Body image; Self-esteem; Peer pressure; Caring about what others think of you; Being popular; Facing your fears; Following your dreams; And, of course, boys and "TWILIGHT"! This new web series will be released, while we are packaging and raising financing for VAMP IT OUT.

Thanks again to Brooke for sitting down with us, to check out her work visit BrookeLewis.com and MsVampy.net.