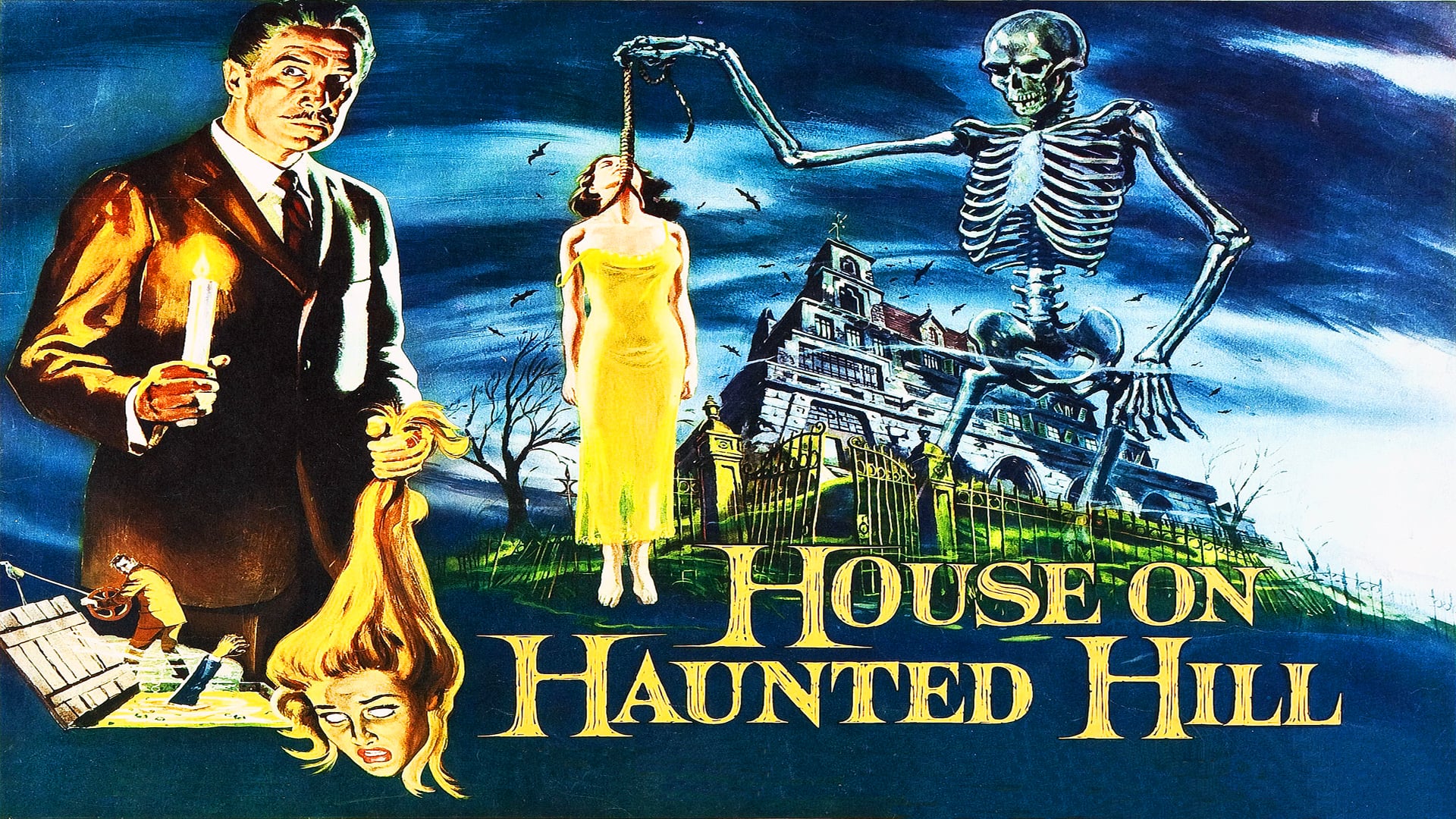 In Extremis: House on Haunted Hill and the Fine Print on Contests

Disclaimer: This review is for entertainment purposes only and contains no legal advice. If you find yourself holding a loaded gun locked in a haunted mansion with a prize on the line, bring a carrier pigeon to contact your lawyer for advice. This review also contains SPOILERS; so if you were not alive when either of these films were released, based on our demographics, kindly observe them before reading. Its the shiver and shake, quiver and quake picture of the year! [That was an actual tagline]

House on Haunted Hill is a 1959 horror classic. Not to be confused with the 1999 or 1959 versions of The Haunting, both based on the novel The Haunting of Hill House, by Shirley Jackson. Maddening, isn’t it?

The film is also in the public domain, so you can watch the entire thing here for free:

A minute and a half into the film Vincent Price lights up the screen and I was buckled in for some thrills and chills. You have heard the plot in about every parody of a horror film. Five guests stay in a supposedly haunted mansion overnight. If they make it twelve hours they’ll receive $10,000!!! That may not sound like a lot, but it would be $86,594.16 with inflation.* Unlike in the remake, Price jokes that he will give the money to the guests next of kin in case they don’t survive.

The film has creepy atmosphere, lots of Theremin, and some of the worst effects I have ever seen (they tried at least). It is also fairly upsetting to watch a film premised on the concept of a psychologist that diagnoses “Hysteria.” The American Psychiatric Association stopped using that term in 1952 when they published the Diagnostic and Statistical Manual of Mental Disorders.** That same doctor has the line “Nora I think you’re a little upset, would you care for a sedative?” It would take a whole team of sexists to write the amount of gas lighting in a movie like this!***

It also originally featured the “Emergo” effect in which a skeleton on a line would appear to audience members in real life, and look like it was being controlled by Vincent Price on screen.

But you did not come for a film review… you came for the hot legal takes that no one cares to write. So first off – is this competition legal?

First you must determine if this is a contest, a sweepstakes, or an illegal lottery:

This is not a lottery, as there is no real element of chance. You do not need to pay to enter, as Frederick Loren (Vincent Price) chose these specific people to enter freely, however it can be argued that the time and effort of staying in a house overnight might meet the test for non-monetary consideration. There is a prize of $10,000 each. However, this is not random or chance; you decide to stay in the house overnight and you win.

You can’t even get out as you are locked in at midnight. This also suggests it is not a contest per se, as there is no element of skill, unless we consider staying alive the skill. (But, if you’ll recall, Mr. Loren says he will give the money to your next of kin). Finally, this is not a sweepstake as there is no element of randomness as discussed above. So, what is this?

I would argue that in the 1959 film it is a gift with conditions, called an “onerous gift.” Because there are conditions attached to receiving the gift it in fact looks more like a contract. To have a valid contract you need: an offer, acceptance, intention, and consideration. Also, the parties must have capacity to contract.

A contract is however illegal if it involves committing a criminal act or a civil wrong or acting against the public interest. ***** In this case Mr. Loren is trying to contract with witnesses as an alibi, in aid of his plan to murder his wife. That is an illegal purpose. However, the guests do not know this. They think they are just in a contract to stay in the house, with the caveat that they must stay alive or their money is split with the other guests and/or their next of kin – there are conflicting lines about whether the families inherit the money or the other guests split the pot. It is not illegal to stay alive in a house, and their actions may not directly cause an illegality. The court may have a debate once the guests are given handguns in cute little coffins whether or not the contract took on an illegal nature; but we are in the United States…

We have only talked about one of our two films. We have a whole remake of troubles to discuss. I want to tell you about the “happy” ending of House on Haunted Hill (1999). This movie takes everything interesting about the first and reduces it to ghost ashes. The film has the same general premise: 5 people invited to a haunted house and if they can stay the night then each of the guests get 1 million dollars!

And that was 1999 money. But please if you have not seen the trailer, do watch it below, both for the PS2 graphics and the narrator getting the number of guests wrong:

The movie also plays Marilyn Manson’s Sweet Dreams twice, VERY LOUDLY, to not so subtly express that the characters are desperate for money and that some people want to use them.

So, unlike the original where most of the cast survive, only two can make it out alive. The house is alive and trying to kill the descendants of the 5 survivors of a fire started by the patients of an asylum… did I mention we were in an asylum, so it isn’t really a house on haunted hill. Anyway, two of the cast survive and they happen to be one person who pretends she is one of the guests on the list and one person who was adopted. A fact he screams that out before being saved from the ghost hybrid of all the dead souls consumed by the house. This film is just as great as it sounds…

Note that I did not create this clip.

The two surviving guests find five checks made out to cash for 1 million dollars each. Wow, what luck?! They must be on cloud nine. If they can only get down from the top of the House/Asylum/Castle they are stuck on.

Except they have to pay taxes on that. We aren’t told where the movie takes place, but let’s pretend it takes place in California as most of the movie was filmed there. Assuming they split the money equally, each would have to pay 1.2 of their 2.5 million in Federal, Federal Insurance Contributions Act Tax, and State taxes. ****** That is because the money would be considered a prize and tasked as a portion of their regular gross income. There is no personal income tax in Florida, but only one scene was filmed there, and everyone seemed too sane for it to be Florida.

Also, outside of reporting to the IRS, there are reporting laws under the Bank Secrecy Act of 1970. ******* It is necessary for banks to report total daily transactions that exceed $10,000 and report suspicious activity that may signify money laundering, tax evasion, or other criminal activities. ********

These two characters are depositing five checks worth $1 million. We are told one of them is an ex-professional athlete, and the other character is an assistant to a Hollywood producer. While these could be people that make reasonable amounts of money, after the second transaction of $1 million an eyebrow or two might be raised.

While it is not illegal to deposit a large amount of money, the FBI or police may wish to investigate the source of that money, and upon finding that the Amusement Park mogul and his wife who issued the checks are missing and presumed dead, then I don’t have to tell you who the prime suspects are.

But can the government seize that money from you? Yes and No.

The Supreme Court of the US dealt with this issue in United States v. Bajakajian.********* In that case, a Syrian business person tried to take $345,000 out of the United States in his suitcases without declaring it to US customs. He plead guilty, however the customs agents attempted to seize the entire amount as proceeds of crime. The case went to the Supreme Court of the United States eventually, who determined it was grossly disproportionate to allow the seizure of the entire amount based on the offence. But in that case Mr. Bajakajian earned his money, and it was in no way connected to a crime. Our protagonists in this film won it from some mysteriously dead millionaires; and unless the house eats the police as well, they are going to find handguns inside that have been fired by our lead heroine. While not 100% proof she was involved in their murder, she might be a more believable suspect then bad CGI killing Mr. and Mrs. Price.