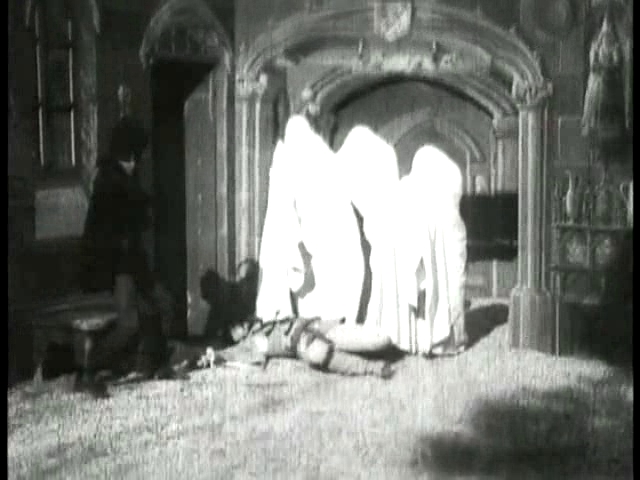 Editor's Note: In Extremis is an ongoing series that will address your burning legal plot hole queries from horror cinema. Example topics include but are not limited to, “Are blobs people in the eyes of the law?” or “Is the creature from The Thing just gerrymandering?”. Adam is BGH's official unofficial lawyer who continues to make our decisions regrettable and reminds everyone to never, ever listen to our advice. This time Adam considers whether or a not the undead can be jailed for causing a victim to give up the ghost.

Disclaimer: this review contains spoilers for a 122-year-old film. This is also legal entertainment and provides no legal advice. If you are a corporeal or non-corporeal entity, please consult a lawyer before and after scaring a person to death. If you are the ghost of an early French filmmaker, give me a call and we can discuss the rights around your big comeback film.
I wanted to talk about being scared to death. Literally.

The 1896 silent film Le Manoir du Diable (The Devil’s Castle) is often regarded as the first film to depict supernatural elements, i.e. ghosts, bats, sexy vampires. Let me tell you: it is about as scary as the film Friend Request—with 1/30th the run time. If you have not seen this masterpiece, I will wait….

Georges Méliès was an essential technical pioneer in the early years of cinema. With no sound, great timing, and a few practical special effects, Méliès created a myriad of unique and ambitious films. Le Manoir du Diable was also one of the first films to have a lengthy 3-minute run time. You may recognize his groundbreaking special effects, as seen here:

Apollo 18, eat your heart out!

Le Manoir du Diable opens on a bat flying around a French castle and turning into the demon Mephistopheles. The demon produces a cauldron, an assistant, and finally a woman from the cauldron. Two cavaliers enter (sadly no LeBron). Cavalier 1 is scared away by various ghosts conjured by the demon. Cavalier 2 attacks a suddenly appearing skeleton using his sword (not sure what he was trying to accomplish there) which turns into Mephistopheles.

Cavalier 2 is then attacked by ghosts before being taken in by the beauty of a young woman who suddenly turns into an crone witch archetype. Here we have another long standing horror trope akin to the spooky room 237 occurrences in The Shining (1980). Cavalier 1 returns and then, like Sir Robin, bravely runs away, jumping over a balcony. Finally, Cavalier 2 uses a large crucifix to ward off the demon, which begs the question: why would a demon keep its weakness in the castle? Classic horror movie logic.

What does this have to do with being scared to death? The ghosts likely scare Cavalier 1 to death—or at least severe injury—as he jumps right over a castle balcony to escape. For this article, I will assume he did not have a lucky landing.

So, should the supernatural be sitting behind bars for murder or manslaughter?

In France, manslaughter is defined as:

Seems low. Additionally, the ghosts had no duty of care to the Cavaliers who broke into their castle. Oh, and you cannot charge ghosts…. So, it is unlikely to be a successful case in the film’s home country.

In Canada, there is a provision in the Criminal Code dealing specifically with what happens when someone is scared to death. To be charged with manslaughter in Canada, there must be a culpable homicide and,

Killing by influence on the mind:

Hear that poltergeists and ghouls?! Canada is open for business. You can scare almost anyone you like to death here, just stay out of our hospitals and kindergartens.
I give this film a:

9/10 as a historical artifact
2/10 for scariness (how are you supposed to scare someone without even one jump scare?)
10/10 for legal realism, as no one tried to arrest and criminally try a ghost