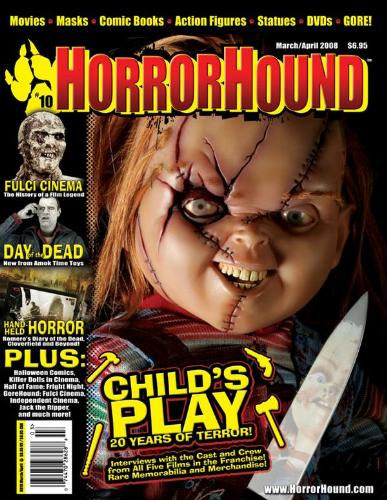 Anyone who has been paying attention to the podcast lately, (or readers of Horror Hound) know that the latest issue has been on stands for about two weeks now. If you happen to pick it up, be sure to check out my article, on the first three films in the "Child's Play" franchise.

While doing research for the article, I managed to uncover tons of fascinating information about a series which, to be honest, I wasn't a huge fan of before setting out to complete the article. It's funny how life works like that some times. Now, after interviewing everyone involved (Don Mancini, Brad Dourif, Tom Holland, David Kirschner) I have a much greater respect for that original trilogy of films.

One thing that Mancini (writer of every film and director of "Seed of Chucky") said to me that stuck with me, was that of all the long enduring horror franchises, "Child's Play" is the only one to have the same writing/producing team behind EVERY film. That was something that had never really occurred to me (and "Phantasm" not widthstanding) is an incredibly impressive feat.

So that's a must read. As usual, Nate and Aaron have really outdone themselves when it comes to fan-oriented material. For anyone who has never read an issue before, think of it as the magazine for fans. I know people have said this before. But if you're like me, and can't bring yourself to pick up a copy of Fangoria, and can't stomach everything in Rue Morgue, then you've got to pick up an issue of HH. I sincerely think that the mag will continue to hit an untapped horror audience who have lost faith in their magazines.

The other great articles from the mag are: A retrospective on Killer Doll films (who knew there were so many?) and a great plea to horror fans to help save Independent DVD companies. I'm being honest when I say that I have a hard time mustering any sort of sympathy for large DVD companies when it comes to piracy, but the article does a good job of making it's main point: If you're going to buy horror DVD's (and not copy them), make sure it is from an independent dealer. Oh, and you can't forget a great retrospective article on Italian shock-master Lucio Fulci.

Anyhoo, you can find Horror Hound at Barnes and Nobles, Borders, and other major book retailers. Or, of course you can visit www.horrorhound.com.