Alright, here we go with Harper’s Island episode two. After last week’s opener we can finally hunker down and start to answer some questions. Of course the biggest one is “who’s doing all the killing on the island?” Well we still have 11 more episodes to go so I don’t see the answer to that being thrown out any time soon. But they did give good reasons why everybody could be our killer.

This week the wedding party set out on a scavenger hunt around the island organized by Trish and Henry. Everybody breaks up into small teams and heads out into the woods for some good old fashioned fun. Seems like a perfect chance for our killer to really rack up the kill count.

Like I said this week pretty much put everybody on the suspect list. Shane the angry friend of Abby’s ex-boyfriend Jimmy just seems pissed at everyone so he could be our killer. Henry’s brother J.D. is all goth and gloomy so there is a good chance he’s our killer. Trish's former flame Hunter seems to still be lurking around the woods and ready to kill anyone who stands in the way of him and his one true love. Chloe dragged her entire team out to John Wakefield’s grave and went off on a short rant about how she thinks killing people is kind of hot. I'd say there's a good chance she’s the killer and the proud owner of a sexually transmitted disease. Cal is pissed because he’s dating Chloe and probably also has an STD. I’d probably kill people too if I was him.

By the end of the show 75% of the cast has a good reason to be the murderer. The only one who isn’t acting suspicious is Abby’s ex-boyfriend, Jimmy. So in turn he is probably the killer. But who knows. By the end of the show I was so confused I started accusing my wife of being responsible for all the deaths. 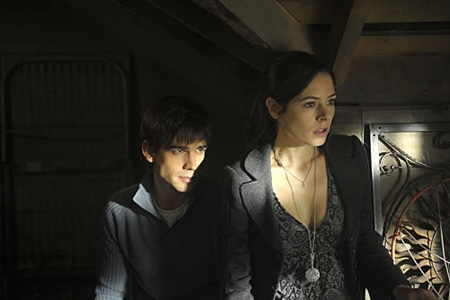 Did I say earlier that she was the killer? Scratch that.

Another prime suspect that we got to know this week is Kelly Seaver. She’s a local girl who seems to freak everyone out because she’s all doom and gloom with black eyeliner. We later learn that she has something in common with Abby in that her mother was also one of the victims of John Wakefield. She dreams of moving out to LA to escape the small island gossip and start a new life. Eventually her and Abby bond over their whole mother-being-dead thing and Kelly is invited to move out to the city of angles. Of course because Kelly is all creepy and pops up everywhere she is probably the killer. I’d bet money on it, mystery solved.

The rest of the episode is spent focusing on the ongoing feud between Henry and Shane. There’s a good chance Henry’s brother J.D. dumped a dead deer on Shane’s truck and a equally good chance Shane put a deer’s head in J.D.'s bathtub. Pranks, they’re fun for everyone.

Along the way the body count shoots up from two to five this episode. The minister bites it because... well the killer hates ministers I guess. Trish’s sister gets torched after falling into a pit while looking for her dog. And of course Kelly is found hanging in her house. Did I say earlier I thought she was the killer? Scratch that.

Dollars to donuts episode two was a lot more promising then one. Yes I’m still put off by the Dawson’s Creek storyline but the murders are getting pretty creative. The minister got hung upside down and decapitated. That’s "Must See TV" my friends.

So WHO is the killer? My money is on J.D. right now. For one he’s goth, that’s got to count for something. And two, he was the last one to see Kelly before she bought the farm. My money is on him... or my wife. One or the other.