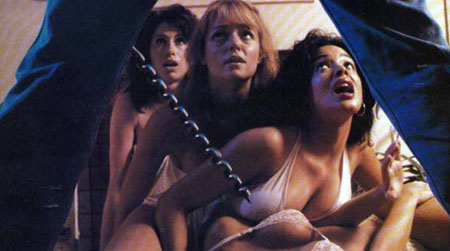 Worst ever follow-up to an original film?

For a number of reasons, horror is a genre that has produced some pretty decent sequels. "Halloween II", "Nightmare on Elm Street II", "Child's Play II", and more recently, "Hostel Part II" and "Saw II", were all films, that while maybe not superior to their origins, were at least worth watching in their own right.

One of the main explanations for the bevy of solid sequels in horror may be the sheer volume of them. This volume of course has led to a large number of total failures. In deciding which film dropped off the farthest from original to sequel, I looked for a couple of things. First, the source material had to be decent. If a real clunker gives way to another real clunker, that shouldn't come as much of a surprise, and in fact, if you're paying money for a crappy sequel to an already crappy film, then that's on you.

Secondly, the original film has to leave something on the table. It's not uncommon for an executive to look at a surprise horror success, and say to himself, "Why not go for two?" Well, the answer to that oftentimes is that your main villain is lying dead on the bottom of the ocean or was vaporized or was tossed out into space. Finally, and this may be splitting hairs, but to truly be a disgraceful sequel some of the talent has to return.

If everyone with any sense has walked away from a sequel audiences should get the message. But when some of the principles come back, well that might get some folks excited, and excitement is one of the key ingredients in disappointment stew. Weighing all those factors, I feel quite confident in saying that the most atrocious of all horror sequels was 2005's "The Ring 2." Not content to let this abomination unchallenged though, director Hideo Nakata, who actually helmed the original "Ringu" and its sequel, has been announced as the director on "The Ring 3." I guess I'll have to revisit this discussion in 2009.

Well I'll be damned, another Ring movie. Jon, by your reckoning, this might actually be decent since all the originals have wised up and moved on! In the same vein, there is another American/Japanese remake out there that fell significantly in quality between the first and second outings. Granted, the original outing was exactly top notch, but it had it's moments and over all was a decent package.

For "The Grudge 2" however, every instance of creep that the first contained was either rehashed in luke warm fashion, or was forgotten all together. It's the same haunted house, the same creepy ass kid; this time it's the sister who can't stay away. I like Sarah Michelle Gellar. I don't think she's the end all/be all or the return of the 'scream queen' (though she's trying pretty hard), but she's got chops. She can work well with the creepy material. For the second movie they case Amber Tamblyn as her sister, and Ms. Tamblyn really didn't do jack shit but whine. A lot.

I have to agree with both of those picks. I have been fortunate enough to have never seen "The Ring 2". Although, I have seen "The Grudge 2". I depart from Casey in that I think the original Grudge remake is very high quality. Next to "The Ring" remake, that was the only film in probably about 10 years (with perhaps the exception of "The Descent") to actually "scare me". I have a very simple system for that. If I go to bed at night after watching it, have to wake up to take a pee and I don't want to do it... than the film has scared me.

That said, there is a very valid argument to be made about "The Grudge 2". God damn was that one bad. It's not just that the scares are limp, because I really think it's pretty easy to make that freaky Asian girl look scary. The real problem with that film is the atrocious pacing and editing. There's no real story, just a handful of limp scares strung together and a frustratingly open ending. It's pretty shocking how much the second film fell off from the quality of the first.

That said, if we're to go obscure for a second, I have to say that "The Slumber Party Massacre II" is the worst ever second effort in my book. While the first one is a great sexploitation slasher film (written by a feminist no less), the second one is some strange Rockabilly tribute starring the chick from "Wings" and a rubber chicken. I'm sure there is some pretentious film geek out there right now saying that I "just don't get it", but if that's the case, I have to call shenanigans. Of all of the awful films I've watched over the years for this site and it's previous incarnation, "TSMII" is by far the biggest atrocity. The vein in my forehead is popping out just thinking about it.

I actually avoided "The Grudge" due to my rule of avoiding PG-13 horror fare, although by many accounts it sounds quite good. The second one though sounds like it could satisfy all of my tenets of poor sequel making. In general, it would seem to me that the j-horror remakes are particularly susceptible to bad sequels. The threat encountered in those films is usually vague and under-explained, at least for large portions of the films, and then when it is vanquished (if it is vanquished) it's through equally vague or under-described means. This leaves plenty of room for vague and under-developed sequels.

Surveying the breadth of the genre, in almost every case horror sequels go in one of of two directions: filmmakers either try to kick up the tension by going bigger (i.e. it's not just our town that's in trouble, it's the whole world!), or they rehash the same basic threats with a new cast of characters or new locale (ie: I heard that a shit load of people were murdered in these woods last year, let's check it out!).

Now both of these types of sequels can make for good movies, and both can make for steaming piles of excrement, but most slashers tend to fall into the latter of these two categories. While I haven't seen it, that's my guess as to where SPMII falls out. I find that evaluating the sequels to a lot of the 80s slashers is tough because the originals themselves are obscured by nostalgia. So when we're discussing a film like Friday the 13th, we're not so much discussing its quality as we are what it stood for then, and what it still means now. Friday the 13th II doesn't get that same pass, and must stand much more on its own merits.

One classic 70's era flick whose sequel I thought took a dive was The Hills Have Eyes. The original is solid Craven work: violent, gritty, and tense. The sequel is classic Craven garbage, with an over the top plot, poor dialog, and no real point of existing other than to try to get folks to pay for a second time around the block with some mutated desert dwelling freaks. It was eight years in between the first and second HHE, and the sequel came right on the heels of the original nightmare, so I wouldn't be surprised if this was sitting on a shelf somewhere and got rushed in to production/dusted off when Craven became a major draw.

DAMN YOU SCHNAARS! You took my next entry! The disparity between "The Hills Have Eyes" 1 and 2 was pretty staggering. As a matter of fact, I'll go as far to say that the Remakes 1 and 2...were better. The Hills Have Eyes 1 was for the time, the epitome of exploitation! I family stranded in the desert, freaks coming out of the hills picking them off one by one. It was packed with fear, gore, and violence. Part 2 was not available in the states on DVD for quite a long time so I didn't get to see it until the last year or so. Going in I was filled with anticipation, excitement...it was "Hills Have Eyes", it had Michael Berryman, and was directed by Wes Craven! This shit had to be off the hook! Instead, I got early 80's fashion adopters and motorbikes.

So, Jon's going to push me outside the comfy choice I already made. See, that's just how he rolls. I got a good one though. Beyond sequels, how about when a franchise IMPROVES between the first and second films...then plummets drastically upon the third installment? That my friends, is the Alien franchise. Alien is quite possibly my favorite Ridley Scott flick of all time. Taut, gory, and scary as hell. Monsters that could kill you with their ACID BLOOD even if you sliced and diced them? Oh yah. Not to mention they're picking off your crew one by one, and you have absolutely no place to run, because you're on a space ship? Masterful. Along comes James Cameron with the sequel "Aliens".

"Aliens" hit some seven years after the first movie, totally different writer and director, most felt squeamish at the thought. Turns out? It's a damn fine sci-fi horror flick in it's own right. Ramp up the action and jump scares of there slow psychological horror of the first, bring back Sigourney Weaver and add in some good talent around her. Change it up some and give it more open spaces, mutated aliens and bigger fire power, you've got a fresh flick that's still familiar.

After "Alien" and "Aliens", this franchise was going places! Then it slid head first into the guard rail. "Alien 3" hitting in 1992 was a let down pure and simple. Changing up directors and writers once again we get another attempt at the outer space boogey man thriller, this time there's nothing to change it up. It's more of the same, with Sigourney Weaver, and things began to grow boring. It's not as scary the third time around unfortunately without a new way of scaring the piss out of your audience. From there, the franchise flat lined with the onset of Alien 4 and the "Alien Vs. Predator" franchise, but that's another Hack Off topic for another day!

I will have to disagree with Casey (and probably the world) here. I am one of the few who thinks that "Alien 3" is an underrated flick. It's a dark, claustrophobic little story that takes the franchise off in a bit more understated fashion. The problem is, after the action-fest of "Aliens", "Aliens 3" was inexcusable as a follow up. People expected an epic, world-battling trilogy-ender, and instead they got something closer to the scale and tone of the original. There is some great acting in that third film, that too often gets overlooked.

All of these films considered, I think I'm going to have to use my psychic abilities and say that by this summer, we can confidently add "The Lost Boys II" to that list.

Do you think there is a such thing as too much gore? Have a specific example? Feel free to continue the debate in the comments.