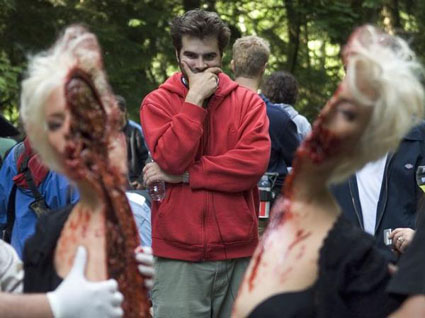 Is there a such thing as too much gore?
Certainly. It really depends on the type of movie you are making. Some of the most terrifying horror films of all time (see Texas Chainsaw Massacre) managed to scare the living shit out of people with virtually no gore. On the other hand, certain cult classics (see Dead Alive) would not even be considered watchable, let alone classic, without gore. I think that gore exists on a sliding scale. The less you want people to take your movie seriously, the more you add. The Saw films, which started off at least party respectable, have lost nearly all of their spark because of how quickly people tire of massive amounts of this and that flying all over the place. Gore, like jump scares, is just another common crutch in the horror genre.
I was tempted to say yes here, but the more I think about it, the more I believe that in an absolute sense, there's no such thing as too much gore. Mark referred to gore as a crutch, and I can understand why, because some filmmakers use it as a crutch, covering up for inadequacies in script or in directorial ability with gross or even over-the-top splat. But gore itself is just one aspect of what makes a film, usually a horror film. Mark cites some good examples of nice highs and lows in gore, but the real question that must be answered is does the gore feel right. Feeling right can mean a lot of things: that it's central to the plot, that the gore is part of a statement or is being used ironically, etc.. Sometimes gore feels right and works, sometimes it doesn't, but it's hard to say that there's any absolute amount of gory set pieces that I would consider too much.
Jon is right, but I think makes a bit too broad of a point. Of course there is no absolute bar when it comes to too much gore, that's the point. It really goes on a film by film basis. Dead Alive, as Mark pointed out, would be unwatchable without the gore. It's the entire point of the film. At the time, what Jackson was doing was pretty groundbreaking. Still, he knew that he couldn't have an hour and a half straight of it. From the opening scene on, he slowly prepares you for the finale by ramping up the disgust level notch by notch. Had he started at that crescendo of red stuff from the beginning, the film would become exhausting and insufferable.

My biggest peeve, as I've mentioned before, are these unrated director's cuts. The term has been rendered completely useless. Now what we're seeing are directors going in and actually extending gore shots that didn't need it in the first place. The results are awkward shots where the audience gets the overwhelming feeling that the whole affair has gone on too long. On another note, I do have to admit that the older I get, the less and less I'm obsessed with a film being gory. Perhaps that is also indicative of the times we are in, or being burnt out on certain waves of horror films, but is an interesting point to make in this debate.

Sure. Pure and simple, Gore is just like any other element that makes up a movie. You use too much of it, you've bypassed it's effectiveness. It's not necessarily a morality point though or even a point of weak stomachs. It's all artistic. Gore is a lot like a laugh track. Used in the right amount in the right places, it's going to help pull you into a movie. Used too much at the wrong times, all you can focus on is 'ah christ, another gore scene'. There's no question that some movies had to much. For me, they're few and far between though.

So, to echo everybody else; if it's integral to the story, load it on. If it's not needed, skip it. Except for vomit scenes when mixed with the gore. That shit makes me want to...well...vomit.

As much fun as it is to argue, we all seem to be pretty in line here. I do want to clarify briefly and say that I'm not in favor of any sort of censoring of gore. This might not be controversial or anything, but it's important to note that many folks will not only object to a film like "Cannibal Holocaust," but will outright insist that it be destroyed. While I was certainly no fan of the film, and the killing of animals may indeed cross some lines, I in no way advocate the banning or censoring of that kind of material. If the creation of a gory scene outright breaks a law, then that's one issue, but if not, then nothing should prevent a free person from viewing that film. Ultimately, my feelings about that film may be that it is reprehensible or disgusting, but I would never seek to impose those views or opinions on others. Gore, and the extent to which it is necessary or unnecessary, is a reflection of a personal reading of a given film.

Do you think there is a such thing as too much gore? Have a specific example? Feel free to continue the debate in the comments.