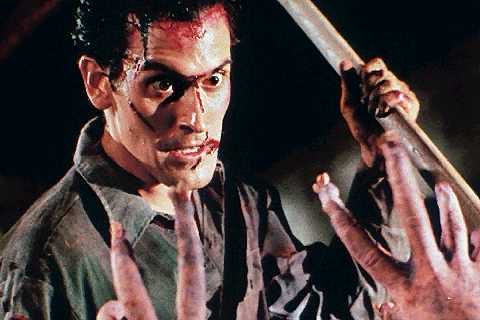 Best Horror Comedy?
It's a given that we're all a fan of scares. A good jump scene, a messy murder; it's our bread and butter. Sometimes, even the most hardened of us horror heads need a change of pace once in awhile. Trying hard not to stray to far from the homestead, we find the fix in a little cross genre hybrid called; the horror comedy.

The first thing that comes to mind for many people, is the Wayan Brothers. And by Wayan Brothers, I mean the 'Scary Movie' franchise. If that's your only flirtation with the cross genre however, you've sorely limited yourself. There's many a high brow laugh to be had, all while surrounded by some solid scares and some good old blood and guts. Many times the humor is more subtle in something such as a dark comedy, other times they're out right blatant. (No, I'm still not talking about 'Scary Movie')

Since I'm kicking this off, I'm going to jump the gun and pull one on Eric. One of my favorites of recent years, is 2004's Dead & Breakfast. There's a loose story here believe or not, and it's really not too bad. Top that with some good over the top gore, it's getting better. However, when you get to the line dancing zombies, my heart has been won. Plain and simple. There are many different elements at play here and they all combine nicely for a low budget flick. The soundtrack itself is a stand out with rapping redneck troubadours, with lyrics to match. Throw in some decent talent, such as David and Ever Carridine, (yes, those Carridine's) Diedrich Bader, Jeremy Sisto, and Portia de Rossi, well let's just say I found my self pleasantly surprised and highly amused.

Most of the recent horror comedies that I've enjoyed have tended to fall into the homage category. But to really appreciate a film like Shaun of the Dead or Slither, you have not only to be pretty familiar with horror and the conventions that make horror movies work, but you have to be a fan of horror, otherwise you'll likely be turned off by the gore and violence. The aforementioned Scary Movie films tend to do well not because they ape horror in a particularly funny way, but because they poke fun at slow moving, recent films that most audience members are at least aware of, and do it in a way that is mostly unoffensive to those with weak stomachs.

There's two horror comedies that I've really enjoyed that do what the Scary Movies do (that is appeal to non-horror fans), but do it much better. I would say that it's not a coincidence that both of these films are also musicals: Little Shop of Horrors and The Rocky Horror Picture Show. I saw both of these movies when I was still pretty young, and I was hooked. Like most of the best horror comedies, in both films the humor plays off the tension. I can't possibly do justice to all the stuff that Rocky Horror does in playing with gender and sexuality, but needless to say, anyone who doesn't love a sweet transvestite, from transsexual, Transylvania, should probably take their pogs and go home. And with a cast that includes Rick Moranis, Bill Murray, Steve Martin, John Candy and others, Little Shop probably needs little defense from me.

Alright, since you both mentioned "Scary Movie" but shied away from praising it, I'd like to offer up the suggestion that the first two were actually pretty solid comedies. The first, obviously, as far as the story goes, is much tighter and follows a logical narrative structure. It certainly provided some laughs and Ana Farris is none too hard on the eyes. The second film started to tread in that ADD "every reference is a funny reference" territory, but it was still a funny film. I still reference the "little hand" gags fairly regularly, which I suppose counts for something.

In general my "horror comedy" tastes are relegated to films like Dead Alive that aren't necceasrily comedies, but don't take themselves terribly serious either. I can't imagine that the room was dead silent when someone brought up the idea of having an infected "Sumatran Rat Monkey." On a (very) similar note, I think Meet The Feebles has all of the elements of a true horror comedy: sex, violence, depravity, and to an extent music. In all honestly, I haven't been able to make it through more than twice, but I enjoyed it on a "good god this is some ridiculously nasty shit" sort of level. It's a shame that Peter Jackson has devoted his career to directing blockbusters, because he had a pretty solid grasp on what makes an irreverent horror comedy work.

Despite the ridiculousness that it spawned, the original "Scary Movie" was actually a decent horror/comedy. Even though it was more spoofy than anything, it did a really great job of taking the plots of "Scream" and "I Know" and sort of melding them into something really interesting. If it's one thing that the series failed to retain starting with the first sequel, it was that real tight sense of story that made the original so intriguing. I'll give Mark that the second one had it's moments (mainly due to Chris Elliot and his "strong hand") but overall was very weak when compared to the original.

That said, I'm not about to say it was the "best" horror/comedy. Many people would probably default to "Evil Dead 2", but I'm one of the few who happens to love Raimi's low-budget original better than it's follow-up. In a lot of ways, Mark also hit the nail dead on by bringing up Peter Jackson and "Dead Alive". He invented his own sub-genre with that movie (lovingly called "Splat-stick") and young directors have been imitating him ever since. So, if you're talking "Best"? "Dead Alive" wins my vote.

I'd be remiss if I didn't mention some other titles, specifically "Sleepaway Camp 2". I mean, a lot of those slashers ended up being horror comedies without even realizing it. "Jason Lives" is probably the funniest entry in the entire series, thanks in large part to the character of "Court", or as I like to call him - "80's ripped jeans guy". Since I'm a TROMA fan, I'd throw a few of those titles in just to mix things up... "Tromeo and Juliet" and/or "Terror Firmer" could definitely enter the conversation, depending on your particular sensebilities.

Like I said though, it's really hard for me to give anything the nod over "Dead Alive".

The only thing I ever found truly funny in the Scary Movies flicks was in #4's spoof of "The Village". When Carmen Electra as the blind girl walks into the full church and takes a shit in the storage box, I laughed my ass off. I'm a sucker for toilet humor though! Aside from that, the Scary Movie's did introduce us to Anna Farris, and I'd think we could all be thankful for that.

"Shaun of the Dead" deserves a special mention here as well. There are so many zombie movies out there that are all derivative of each other; Shaun managed to lampoon them all, and in a way that was still hilarious to those not as familiar with the genre. Simon Pegg and Edgar Wright have a special knack for genre spoofing as seen with their follow up, Hot Fuzz. I'd be loathe to leave them out because they truly do have a knack for genre blending.

Dead Alive is definitely worthy as well. It's been a long time since I've laughed that hard at a movie so gory! The zombie baby is something that has to be seen, and the phrase 'I'm kicking ass for the lord!' has forever entered my nerd lexicon.

I was pumped to see that Raimi and Jackson both got solid nods. It's funny how both spent a good deal of their early careers doing excellent genre work, and both have transitioned so successfully into big-budget blockbuster type of stuff. It goes to show that if you can pull off low-budget, splattery fun, then studios will throw money at you.

I don't want to spend too much time rehashing other great horror comedies; everyone's done a good job of covering the breadth of the genre cross-section above. Two other films are worth mentioning here though. The first, "Black Sheep," is a new movie that we've talked about some on the podcast. It very much fits into that Jackson/Raimi mold of splattery good times. It also has one of the more amazing costume jobs in recent memory, coming in the form of a man-sheep hybrid. As one might expect, there's also many a giggle to be had over the practice of sheep buggering, which may or may not be the best way to keep warm on a cold New Zealand night.

The other movie is one that I'll be a little surprised if anyone else remembers. It's called "Nothing But Trouble," and it's sitting at 3.9 right now on IMDB, which is to say it's probably pretty terrible. I bring it up here only because this was one of those movies that I watched back when I was 10 or 11 because it was showing non-stop on HBO, which we received—through the act of some benevolent creator, no doubt—for free. This movie features Chevy Chase and others trapped in some back-country, hillbilly mansion. It was directed by Dan Aykroyd, so you can likely imagine how it's the perfect film for a pre-pubescent boy. Anyway, if I remember correctly, there's loads of inbreeding references and vague threats to all the protagonists well being, but it was probably more horrifying in my 11-year old brain than it would seem if watched again today.

I totally remember that movie! And ya, it's pretty bad, although Dan Akroyd's makeup is pretty disturbing. Just so you don't feel bad, I'll throw in my childhood guilty pleasure, "Saturday the 14th". A movie that when viewed today, mines the depths of bad movie ineptitude. When I was a kid however, I thought it was the most amazing thing since sliced bread. Cheeseburgers for breakfast?!? That's just crazy!

If you have any thoughts, please leave them in the comments, and check back every Friday for a new edition!