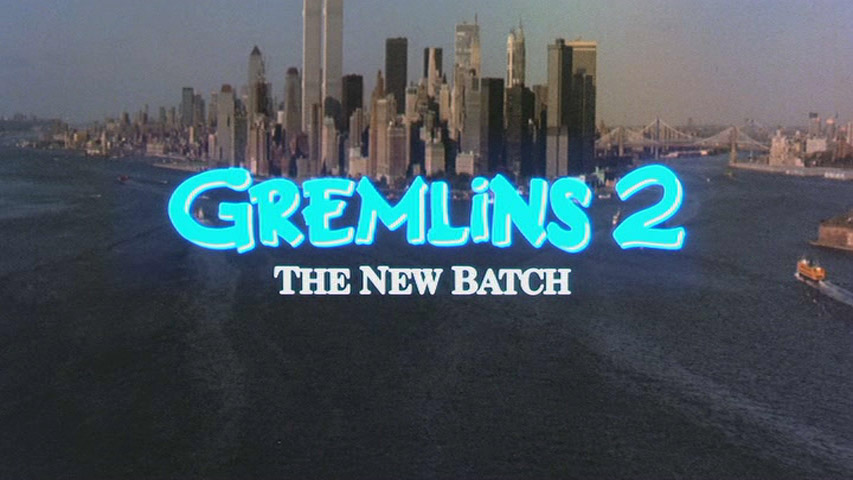 Give it a Chance: Gremlins 2

I was getting ready for work today (aka flipping through the channels) when I stumbled upon Joe Dante's "Gremlins 2: The New Batch" on one of the many incarnations of HBO I have. Having not seen it in ages I decided to sit down and reminisce a bit. By the time it was over, a flood of nostalgia had washed over me along with the realization that I could not understand why people hate on this movie so much (that, and I was late for work). It's been a while, but I thought that perhaps it was time to bring back something I like to call "Give it a Chance," where I spotlight underrated movies in the hopes that someone out there will take a second look...

Joe Dante had turned down the opportunity to sequelize his 1984 hit "Gremlins" for years, and it was only the promise of complete artistic freedom (not to mention a bigger budget) that brought him back into the fold in 1991. When it was all said and done "The New Batch" turned out to be a howling good time, ending up as more of a macabre "Spoof" of the original than a true sequel. It was also ahead of it's time in many ways, cramming as many in-jokes and pop culture references as humanly possible into it's 106 minute running time. Perhaps "Family Guy" owes a thing or two to this classic redux.

Special FX man Rick Baker was brought on board for this installment as well, although it took some persuasion. Originally he had turned down the offer, not wanting to take on something that another artist had created. Dante, knowing how much of an asset to the film Baker would be, snagged him by promising the opportunity to create new creatures.

Baker took the offer and ran with it, creating some incredibly memorable Gremlin spinoffs. Some of the more standout examples are the Bat Gremlin, Spider Gremlin, Vegetable Gremlin (?), Electrical Gremlin (who would prove integral to the plot) and of course everyone's favorite... The "Brain" Gremlin. Giving one of the villians the ability to speak (with a snooty cadence no less) was a genius idea that provides for many of the laughs in the film.

"Billy, if we get through today alive, you're in big trouble."

The entire cast did not return for this offering, but the two main characters from the first film did. Zack Galligan and Phoebe Cates reprise their roles as the small-town couple "Billy" and "Kate," living an exciting but challenging new life in New York City. Cates and Galligan shine on screen together, although to be fair, Cates is so cute and mousy in this role that it would be hard to not look good next to her.

Despite the fun-factor of "Gremlins 2," the film flopped in it's opening weekend. Costing over 50 million to shoot, it brought in just under 10 million upon it's wide release. The prevailing thought is that since it had been so long since the first "Gremlins" had been released (over 6 years) that the public had simply lost interest. In general, 1991 was not a great year for horror, which could have also contributed to the lack of box office success. Had this been released sometime between say 1986 and 1988 when audiences were still clamoring for genre pics, one can only speculate that it would have done gangbusters.

To be fair, there are certain valid complaints to be made about the tone being lighter, but if you prepare yourself for it from the beginning, you are sure to have a good time with "The New Batch." And let's face it, the original "Gremlins" isn't exactly "Hellraiser" or anything.

And although some purists are sure to object to my praise for the film (much the way they do with the "Ghostbusters" sequel) I think future generations should look at "Gremlins 2" as a rip-roaringly fun, innovative, and most of all logical stepping stone from the original. Plus, did I mention Phoebe Cates is in it?

Finally, here are some videos I've plucked from Youtube for your enjoyment. If you get a spare moment this Holiday season, be sure to pop this one in and give it a second chance!

Here is the original trailer. How did people not go to see this?

Two things I learned from this video... Hulk Hogan DOES NOT mess around... And his shirt makes an inordinately loud noise when it rips.

A tongue in cheek Behind the Scenes Featurette

For those true geeks out there, a compliation of all the cutscenes from the Nintendo game for the film. Man, that really brings me back. Notice Zack Galligan's extremely life-like "Thumbs Up."