The video game world has been abuzz this week with the release of the "Ghostbusters" video game, and the buzz is good. Thanks to a pretty awesome daughter, I got my own copy for Father's Day! After a good six hours spent busting ghosts (it really does make you feel good, fyi), I'm proud to report that the early twinges of excitement and hype that was felt back when the game was first announced are all justified.

Story
Dan Akroyd and Harold Ramis said some time ago that if a game was to be made it would have to be presented like a third movie. Working alongside two of the original 'Busters, developers Terminal Reality have done just that. This game is a boon for die hard fans of the movies with all of the original cast coming back for voice work, aside from Dana Barrett and Louis Tully. All of them fit quite well into their well-worn roles and the writing does great to make you feel like one of the gang, with customary rookie ribbing included. Many have said that Bill Murray's performance in this game is a bit lackluster, and while I will agree that he's not quite as exuberant as he was back in the original films, his sardonic wit is still present and accounted for.

There are a lot of characters and story lines revisited from the movies throughout the game. The new additions tie in well and make for a good story flow and the cut scenes are top notch and fill in all the key elements of the story. The direction and angles all work to make the game feel very cinematic. One warning however, if you find yourself in the firehouse at the end of a level and are ready to take a break, be sure to go ahead and start the next level to watch the cut scene. I've found that if you save in the firehouse and come back, it will start you after the next set of cut scenes. You really don't want to miss them! 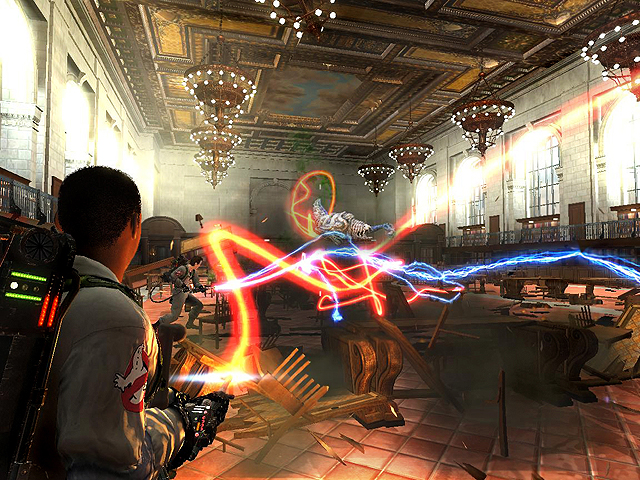 Gameplay
Early videos of the game made trapping ghosts seems a bit convoluted and worrisome. In the beginning, the proton stream felt very loose and hard to aim. At first this is daunting and a touch frustrating, but suddenly it clicks; the Ghostbusters couldn't aim them too well in the movies either! There's a satisfying feeling when zapping a ghost, grabbing him with your stream and them slamming them into walls. The chaos and global destruction is hysterical and feels good once you get used to it.

For this iteration they have added a number of new 'experimental weapons' for you to play with. These include a modified slime gun, a new status stream and more. All are used to solve specific puzzles and work pretty interchangeably throughout the missions. The traps are here as well and are easy enough to work; just drag your ghost into the target beacon and hold it still. "One in the box! Ready to go! We be fast and they be slow!"

Throughout the game we visit a number of locations from the first two films, including the Library, the Natural History Museum, the Sedgewick Hotel, and more. The levels are vaguely similar but there are certain themes that appear with the boss ghosts to help differentiate things and keep it fresh. The gameplay varies from level to level to depending on the boss ghost and their powers. As the game progresses, you soon find yourself in new surroundings opening up the mythos of the franchise and satisfying the "Ghostbusters Geek" in all of us.

There is multiplayer included, though I can't speak of it much. Although there are six different variations you can play, there's no full co-op playthough of the single player game. The one variant I have played called "Capture" involves a full team of five Ghostbusters taking on waves of ghosts, in which you work with your teammates on capturing ghosts, earning more cash by outperforming others on your team. Hopefully I can speak more on this aspect later in the week! (Hint: My GamerTag is CinemaFromage!)

The Verdict
If you couldn't tell, I love "Ghostbusters" on 360 and can't recommend it enough. With just the right balance between action and story telling as well as a heavy dose of nostalgia for one of my favorite set of films of all time, it makes the nerd inside me feel like a twelve year old again. The laughs are great both the obvious ones and the little one off ones as well. To top it all off, some sections of the game even manage to be a bit creepy and you can never go wrong with that.