Day two of Fantastic Fest introduced me to the cruel mistress that is the online ticket queue. Despite logging on at 9:30:01 I found myself one hundred spots behind in the line. After a fifteen minute wait my chance to purchase tickets came up...only to thwart me with a dreaded “runtime error” message. Undeterred, I hopped in my rental car and high tailed it to the box office-only to find out that three of my four choices were already sold out. While the standby line proved to be a mostly accommodating mistress, events kept me out of my top choice for the festival, the forthcoming Sinister. At least that meant I could keep my streak of not pissing the bed intact. Here's what I managed to catch Friday: 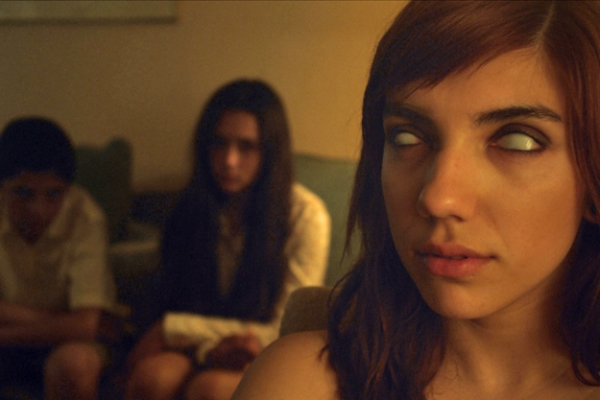 From the prolific Adrian Garcia Bogliano (Cold Sweat, Penumbra) comes a unique take on possession. When a pair of children disappear while exploring a local cave, their panic-stricken parents fear the worst. The children return the following morning and appear unharmed-at first. Bogliano's film downplays the supernatural and instead focuses on how children discover and explore their sexuality and how parents cope with their the threats that their offspring face. There's a showstopping moment straight out of a Fulci wet dream and Bogliano continues to mine black humor from even the darkest situations. 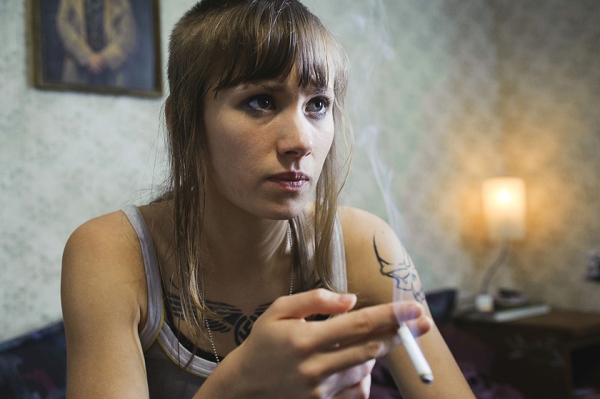 Perhaps you've seen this movie before when it was called American History X (or Romper Stomper. Or This Is England) but the fact remains when executed well, the subject matter makes for a compelling narrative. Set in present day Germany, Combat Girls intwines the story of a young woman wrapped up in the neo-nazi movement and an impressionable teenage girl that gets swept up by their propaganda. Marissa's s is an impenetrable mask of boiling rage as she lashes out against any she feels is responsible for bringing the Motherland to its knees (i.e. anyone foreign,non-white, and not straight). There's the tiniest glimmer of compassion under a toughened exterior and director David Wnendt spends the run time chipping away at its edges. Combat Girls is a brutal film, and often tough to watch. Even at its most redemptive there's a high price to pay for the litany of sins that came before.

I love short horror movies. At their best, they offer a quick stomach punch or a much needed jolt of adrenaline. At their worst (and man oh man have I seen many films at their worst these past few years) all one needs to do is remind themselves that it will all be over before too long-like going to the dentist. Before the Short Fuse programmer our host recommended we hold off on our food orders, as the forthcoming batch of movies offered a bombardment of grotesque, stomach churning subject matter that threatened to replicate the Lard-Ass blowing blueberry pie chunks scene from Stand By Me in our theater. I'll admit there were a couple of close calls, but I'm happy to report my hummus plate stayed safely in my digestive track. As attempting to write up a dozen shorts 99% of the readers may never lay eyes on seems like an exercise in stupidity, here's a handful of favorites you should pester your local independent cinema programmer to seek out and screen:

Director Josh MacDonald wrote one of my favorite films at last years Fantastic Fest (sci-fi horror The Corridor) but Game represents his directorial debut. A bound and gagged woman hauls ass through the woods trying to escape three hillbillies that have made a sport of who can catch and dismember her first. While the twist isn't anything new, Game sports fantastic creature design and MacDonald peppers the proceeding visual gags and laughs. I'm also happy to report no hillbillies were harmed during the making of the film.

Maybe I'm just a sick bastard that's unfit for parenthood (charming and whimsical profile photo aside) but there's something about kids being thrown into mortal danger that warms my heart. When a young boy has his new friend over for a sleepover, it's imperative that they check under the bed, behind the curtains and in the closet. Otherwise you just might fall victim to local serial killer known only as The Slasher. The short makes terrific use of horror movie cliches in its send up of the genre including a bumper sticker that I must get my hands on at all costs. This is a great short for the monster kid in all of us.

At nearly forty minutes this trilogy, spread out among the program, felt like a feature in and of itself. All the shorts explored gross out body horror to varying affect. The best of them involves a henpecked husband growing a puss filled blackhead on his back that's just the right circumference and depth for a business savvy hobo cock. A special mention has to be made for a tender moment of lovemaking that ends with its participants bathed in a frothy mixture of semen, pus and blood.

A modern fairy tale that's beautifully shot features a family trying to assist a stranded motorist that mirrors a fairy tale their young daughter is reading.