Film geeks have swarmed once again to Austin Texas for the annual Fantastic Fest. The Alamo Drafthouse packs a years worth of genre goodness into eight days and offers fans the opportunity to see highly anticipated movies weeks, months or sometimes years ahead of the masses. The Drafthouse itself is like a house of worship than your local AMC for movie lovers with their strict anti-texting rule and table service with top notch food in every theater. It's a place where attendees dress in their best formal wear and bring their dogs for the world premiere of Tim Burton's Frankenweenie. Despite the throngs of sweaty masses pushing and cajoling for a spot in sold out event after sold out event, the staff couldn't be any friendlier or poised. Forget Valhalla, when I die I want to live out eternity in theater room number one.

This is my first Fantastic Fest, yet despite being a newbie I managed to go three for three getting into my first choice for films on opening day, snagging the last folding chair for one showing. Here's a brief look at the films from Day One. 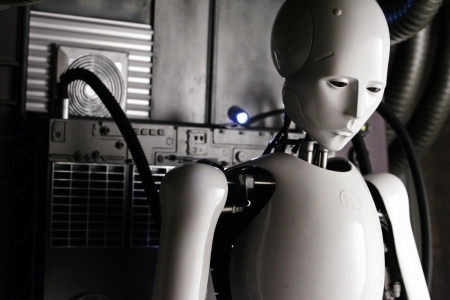 This Korean anthology film presents three unique looks at possible ends of the world. When one of the segments comes from the brilliant but twisted mind of Jee-Woo Kim (A Tale of Two Sisters, I Saw The Devil) there's an expectation for bloody mayhem and carnage. It comes as a tremendous surprise that his entry is the quietest and most reflective of the lot. Set in the not-too-distant future where humanoid robots assist man in their daily lives, an IT specialist is dispatched to a Buddhist temple in order to check up on one of their units. A “UR” robot has achieved self awareness, leading the monks to believe it is Buddha reincarnate and the company that created it to believe they must destroy the unit lest he leads mankind down a path of destruction. While stunning on a technical level (the robots are functional and tangible models as opposed to CGI) while delivering keen insight on our over reliance on technology, the overall effect is a bit of a letdown.

A pair of short tales from Pil-Sung Yim (Hanzel & Gretel) bookend the film. The first is your standard “the world will end by zombie hand” fare after an outbreak of mad cow disease leaves the population a violent, shambling mess. There's a bit of a love story thrown in that brings the story full circle and Yim makes the best case for vegetarianism I've seen committed to film (rotting food minced into animal chow combined with extreme closeups of people chowing down will do that) but there's nothing contained within you haven't seen in a Romero film before. His second entry offers up a nice bit of Monty Python absurdist humor as a young girl accidentally orders mankind's destruction online. As a meteor in the form of a giant 8-Ball hurtles towards Earth, people prepare for the end in ridiculous fashion. An news anchor in the mood for confession and a hilarious spoof of the Home Shopping Network provide laugh out loud moments while the film ends on an uplifting note. 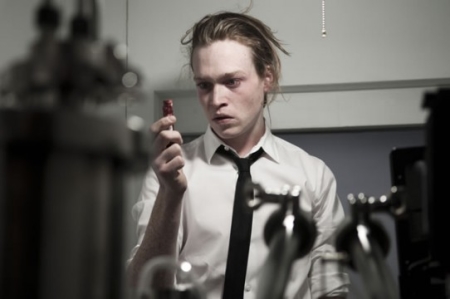 When your name ends in Cronenberg and one half of the genetic material responsible for you created The Fly, Videodrome and The Brood and your debut film contains multiple scenes of visceral body horror, it seems a bit disingenuous to claim your father's work has zero impact on your own. One could sense Brandon Cronenberg's palpable frustration during the Q&A when asked for the umpteenth time how his father's films influenced him, yet to claim “none” is a bald faced lie almost on par as Nixon claiming that he was not a crook. Artistic pretensions aside, Antiviral works as both a body horror gore fest that will satisfy the blood hounds and as a rumination on celebrity obsession and a culture consumed with the vapid. X-Men: First Class Caleb Landry Jones stars as an agent for a company that specializes in injecting its customers with diseases extracted from celebrities. When he smuggles a new strain found in the company's top starlet in his own blood stream he bites off more than he bargained for as the disease eats away at him, leaving him feverish and spitting up pints of viscous blood. Jones is a brooding nightmare in the film and Cronenberg delivers a compelling narrative that explores the road we're headed as a society if we continue to be consumed with consuming celebrity culture.

Twin titans of terror Jen and Sylvia Soska continue to build themselves as names to be reckoned with in the horror genre with their follow up to Dead Hooker in a Trunk. Their sophomore work leaves behind the rough edges of their grind house debut for a much more polished thriller. Katherine Isabelle stars as Mary, a down on her luck medical student with a gift for surgery. When circumstances lead her to no-questions-asked operation on a low level criminal, Mary finds herself immersed in the freakish and bizarre body modification subculture. Isabelle rocks as the titular character with a take on her character that starts out sweetly comical before making dark turns that will leave your genitals shrinking back up in to your body. The twins love for horror shines with nods to Cronenberg and the best use of red hues since Argento in his heyday. The Soskas never shortchange their characters at the expense of visuals, giving Mary and the supporting players a depth your typical studio fare could never begin to cobble together. Stereotypes get tossed aside for a more in depth look at Mary's patients and the levels they'll go through to feel strong in their own (surgically enhanced) skin. To paraphrase the sister's fellow Canadian brethren Bryan Adams, American Mary cuts like a knife, and it feels so right.