In yesterday's news we reported on a story regarding a new film called "Eve", and how its plot bore a striking resemblance to another film in production right now called "Hack & Slash". Both stories involve a sexy female with a dead parent who has made it her life mission to track down "slasher killers".

The catch is that "Hack/Slash" is based on a comic book property, and one that has been around for a few years now. So, as they tend to do, horror fans began to cry foul on "Eve".

The writer/director of "Eve", Brian Metcalf, got wind of the brouhaha pretty quickly, and fired off the following missive to the internet today. Check it out:

"I have just recently been made aware of these threads going on so I thought I would respond in person. I had never previously heard of Hack/Slash until now and from the looks of it, it is something right down my alley - nice art, story premise obviously. But I do realize the similarities. The bit with Eve's father and Cassie's mother is strikingly similar.

Now, I never did steal from this comic as my idea came when I watched a horror marathon when I was young with Friday the 13th, Happy Birthday to Me and others at a friend's house. Due to that, I noticed one thing in common, that all the girl victims ended up killing the psychos. I wanted to take that premise a step further and see what happens after that fact. Then I came up with the idea of Eve cutting a smile in her hand due to her abusive father telling her to smile all the time. The original story goes that she discovers this, is almost killed but the police save her at the last moment.

The rest I can assure is quite different than Hack/Slash due to now researching the comic. I did try to get this film made back in 1999 and executives told me that nobody would want to see a film like this. Now because of the striking similarities and with respect to Mr. Seeley and his beautiful work, I would now like to go a different direction as I REFUSE to do something that someone else is doing, even if its bankable. It has actually hurt my career as I turned down films with premises about a killer going after a group of teens in the woods.

I also ended up turning down other ideas that were somewhat similar. I love this genre dearly, am an avid horror fan, and want to give viewers something new and unique. And I definitely don't want another comparison like Deep Impact/Armageddon. I created Fading of the Cries as my solution to the zombie horror franchise because it's about a hero that manages to use a sword to kill the undead with a superhero touch to it. It isn't about a bunch of survivors running from the undead where they get shot in the head.

Even if I were in mid-production and made aware of this, I wouldn't let it get out. My congratulations to Mr. Seeley for putting out a comic that was published a number of years ago that I want to run and pick up. I would be upset to if the same happened to me. If I can't add some more originality to Eve, then I won't release it."

Wow... is this capitulation I'm seeing here? How often does one project actually cease production because of another similar one? From my understanding, very, very rarely. Now, perhaps we're being fed a lot of BS and these guys just got called on their game, or perhaps Brian Metcalf really is this noble of a guy. Either way, looks like we'll only have that glorious teaser art to keep us warm at night, at least when it comes to "Eve". 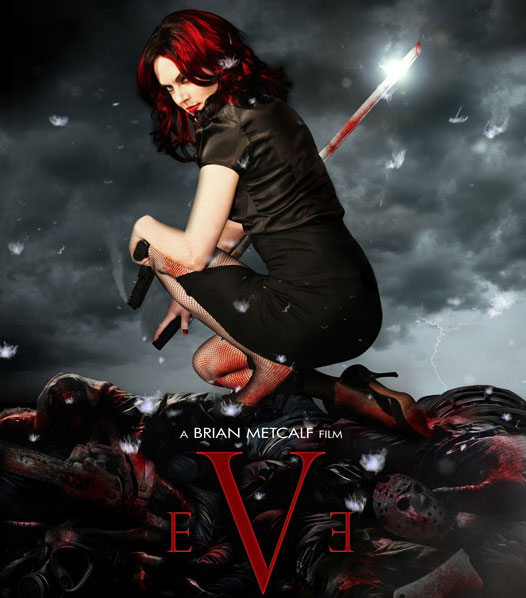