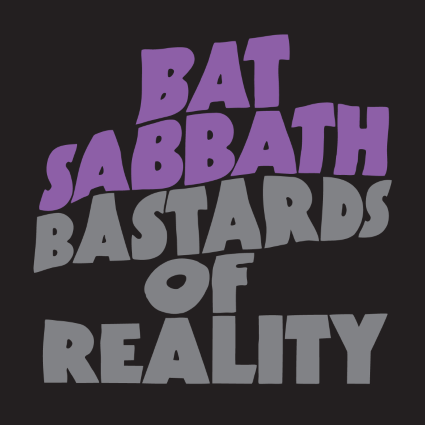 If imitation is the highest form of flattery, then Cancer Bats have flattered a lot of people over the years. Not only does their musical catalog reflect so many of their influences, but they’ve been known to breakout a cover or three when the occasion calls for it. On the heels of the success of their excellent cover of the Beastie Boys’ classic “Sabotage,” the Cancer Bats have dedicated an entire EP to a band they likely aren’t often associated with, Black Sabbath.

Black Sabbath is a name that still to this day can move merchandise like woah (do the kids still say that?) but “Bastards of Reality” is not merely a cash-in. Rather this five-cut EP is a labor of love, taking on the Sab super-hits like “NIB” and “Iron Man,” all the way down to cult (and personal) favorites like “Into the Void.”

While not a total re-imagining of those classic metal hymns (this is, after all, a covers EP, not a remix effort,) what makes “Bastards of Reality” work is that the Cancer Bats’ tone and affect are so vividly different from Black Sabbath’s. Their gritty, overdriven guitar adds a deep, chugging dimension to the sound of “Children of the Grave,” while Liam Cormier’s voice is so different from Ozzy’s that “War Pigs” sounds like a completely different song.

There’s more at work here than just a generational gap in recording technology and the progression of heavy metal over time. The Cancer Bats do their part to actually impose their will on the Sabbath compositions, adding in their signature attitude and punk-influenced sensibilities. “Into the Void” by the Cancer Bats sounds more like a hammer driving nails than Black Sabbath’s original dream of a hazy possible future.

Most of all, this is a fun, well-executed EP of covers that treats the menu with sufficient respect while overlaying a fresh take on some classic ideas. If you have a spare minute and a love for both bands (or either one,) find this and spin it. It’s well worth it.