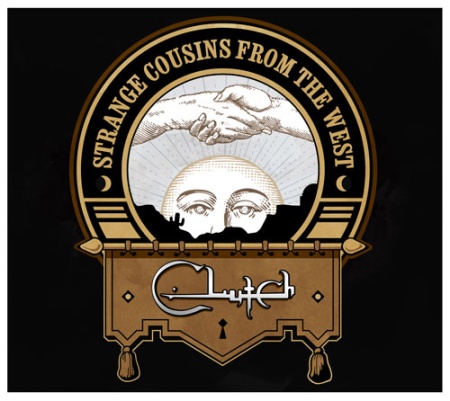 New Clutch album. The very words strike a certain amount of fear into my heart. They didn’t used to. I used to get excited for new music from one of my all-time favorite bands. Those were good days, when “Pure Rock Fury” and “Blast Tyrant” didn’t leave my CD player for weeks at a time. In what ended up being a very dark period for American heavy metal, Clutch kept the home fires burning with pounding swamp metal albums one after the other.

They seemed to be a band with no ceiling. Then, something happened. I don’t have words for it, and even if I did I’m not sure I could explain it. Somehow, Clutch underwent a metamorphosis. They were shedding layers and layers of metal with alarming speed. The jam crowd became more and more prevalent at their formerly heart-pounding shows. The crowds settled down. The mellow crept in. Suddenly, there were warning signs. “Robot Hive: Exodus” was rife with them, but most of the metal community choose not to see them.

Then, we were confronted with “From Beale Street to Oblivion,” which brought us a whole new sound that we weren’t prepared for. The jam crowd loved it. The metal crowd was much more reserved. The band’s chronological catalogue had become a perfect bell curve, with “Transnational Speedway League” and “Beale Street” on opposite ends and “Blast Tyrant at the apex.

So, you can imagine my trepidation at the prospect of “Strange Cousins from the West.” Let me come out and say it; it’s not old Clutch. It just isn’t. However, it is not the worst thing I’ve ever heard.

There’re a few things that go decidedly right on this album. Neil Fallon’s voice is as powerful, gravelly and underrated as it has ever been. At the risk of overstating it, I personally believe his vocal capabilities fit his band better than almost any other singer in a generation. His voice screams southern blues (for further evidence, check Clutch’s cover of “Gravel Road” on “Robot Hive: Exodus.”)

Furthermore, when a band changes to a quieter, more reserved sound, it’s all too common to hear them take the easy way out, and simplify their music. Not the case here. Clutch is as tremendously talented and tight together as they ever have been. With the exception of Fallon’s emerging trend of singing “outside the lines” if you will, none of the notes are questionable or out of place.

Additionally, the album is possessed of some memorable hook riffs that are hard to ignore, and harder to forget. The song “Minotaur” is a great example of this. The music is understated but powerful with a strong bridge and a catchy basic lead riff. “Sleestak Lightning” has a very similar construction, and is very easy to nod your head to. The band’s steep blues influence is much more pronounced on “Strange Cousins from the West,” than it was on “Beale Street.” Everything on the album has a solid flow; a beat that keeps moving and is infectious.

The pitfalls here are the ones you’d expect from a band gone jam: long empty spaces and/or wandering guitar lines that ultimately don’t add anything to the song. And those catchy hook riffs? After you’ve heard them about four hundred times in the same song, the luster wears off. This is the death of “The Amazing Kreskin” and “Abraham Lincoln,” two otherwise promising songs. Too many of the songs (“Struck Down,” “Let a Poor Man Be,” “Unstoppable Watts”) meander into nowhere and wallow for a couple minutes until their end. Yes, friends, it pains me to admit it, but Clutch has become one of those bands that can make a four minute song seem eight minutes long.

On its best day, “Strange Cousins from the West,” is a poor man’s “The Elephant Riders.” It has similar grooves, similar themes, and similar construction. But it’s just not as good. I can’t tell you for sure what sets them apart, but “Strange Cousins” lacks a certain “Je ne sais quoi” in comparison.

In the end, “Strange Cousins from the West” lacks teeth. The beats are heavy but hardly threatening. The tempo is slower, more relaxed. The sense of energy and visceral nature of Clutch’s old albums is absent. There’s very little on this album that engages me, or would make me reach for it rather than listen to “Pure Rock Fury” another dozen times. “Minotaur” is a strong showing, while the other tracks, even among the good songs, are more forgettable. Still, I like “Strange Cousins” more than I do “Beale Street,” so maybe that counts for something.

Clutch fans, I think we may have hit the point where we can start differentiating between “old Clutch” and “new Clutch” in conversation.