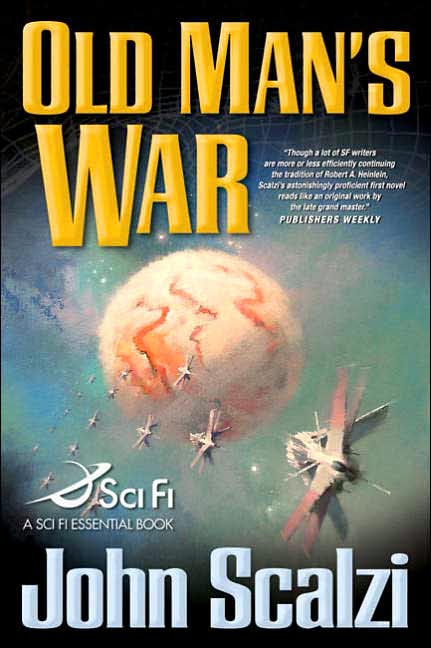 Ah, hard sci-fi. As a long time purveyor, I've read a lot of it. This addiction started way back in the day when I stumbled upon a book called 'The Moon is a Harsh Mistress' by Robert Heinlein.

From that point on, you could say it was an addiction.

I poured every Heinline book I could find. Sure, it wasn't Hemingway, but by good it was all a good fun filled story, some of it even scary, some of it making the blood begin to boil towards revolution.

Since those days, I've read many a great science fiction story. There's a lot of good stuff out there. I had yet to find something that resonated quite as true as Heinlein however. That was, until my discovery of John Scalzi and 'Old Man's War'.

"With his wife dead and buried, and life nearly over at 75, John Perry takes the only logical course of action left him: he joins the army. Now better known as the Colonial Defense Force (CDF), Perry's service-of-choice has extended its reach into interstellar space to pave the way for human colonization of other planets while fending off marauding aliens. The CDF has a trick up its sleeve that makes enlistment especially enticing for seniors: the promise of restoring youth. After bonding with a group of fellow recruits who dub their clique the Old Farts, Perry finds himself in a new body crafted from his original DNA and upgraded for battle, including fast-clotting "smartblood" and a brain-implanted personal computer. All too quickly the Old Farts are separated, and Perry fights for his life on various alien-infested battlegrounds."

The true catch here though is the breath and scope of Scalzi's world, and the politics contained within. Inside is a large and rich universe, described lovingly, and in great detail. Where in 'Starship Troopers' they fought one race for the entirety of the book, in 'Old Man's War' there's more there one; there's six hundred different races or so. And with each race there are distinct strengths and weaknesses and the battle tactics are changed to focus on this.

Finally, the other stand out highlight is the sheer fantastical idea that life doesn't end at 75. In Scalzi's world, it's just beginning. The point of science fiction is to dream what could be possible, to speculate, to ask 'what if' and then tell us about it. Who doesn't dream of never ending youth, a high impact future at the rip old age of 80, high tech guns, space ships, and brain implants capable of storing long lost Looney Tunes episodes. (Yes, it's in there.)

It's been a long long time since I found my self lost in a world like I did back in the day with Heinlein's. Scalzi has managed to recreate that feel and surpass it.

Like sci-fi? Read it. You owe it to yourself.