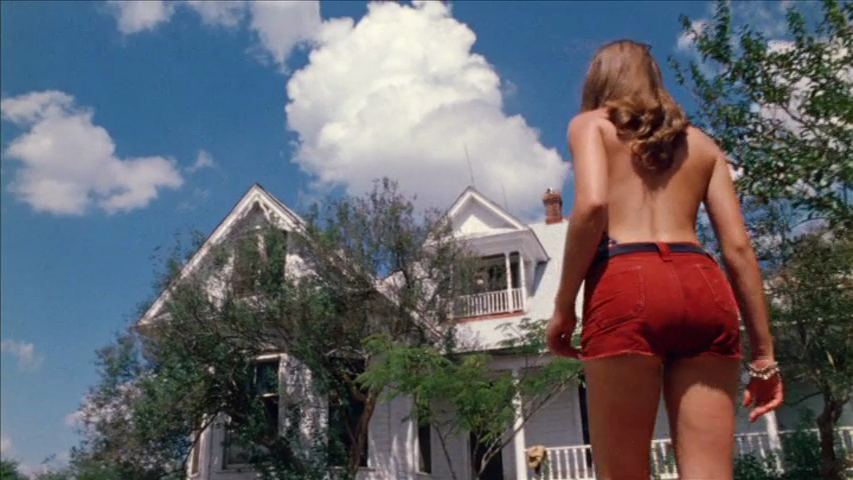 In 2014 The Texas Chainsaw Massacre celebrated forty years of horrifying audiences with a 4k blu-ray restoration boasting 7.1 surround sound.  I thought it would be a great time to revisit a film I hadn’t seen in nearly fifteen years, and one scared me more than anything else I have ever seen in my entire life…well besides the Punky Brewster Halloween special (but that’s a different, and more embarrassing story for another time).

The first time I’d seen the movie I felt like I was watching a real snuff film, and it was easy to see why on my re-watch of this new version, where I was better able to look at the nuts and bolts of the film, instead of simply being assaulted by the experience.  The movie starts with the image of a deformed corpse at a graveyard, under the heat of a sweltering Texas sun, while a somber radio broadcast is played.  This opening scene is so strong that it sets the entire movie up a feel of realism that very few horror films carry.

Another thing worth noting is that Tobe Hooper does an amazing job of building suspense with excessive shots of the house of the killers (instead of the actual killers themselves), to the point where it feels like the house itself is the most terrifying character in the movie.   Until the final act of the movie Leatherface isn’t on screen much, and when he is on screen he's an incredibly menacing presence as he dispatches his victims in absolutely cold and matter-of-fact manner.  And speaking of that final act, it just might be the most contain some of the most claustrophic scenes in film history, on top of a completely over-the-top bonkers finale.

The really big question about this blu-ray is: Will a pristine version of this film enhance the experience?  When I first watched the film it was on an old beat-up VHS copy, which in my mind would probably still be the more frightening version of the movie.  When I saw it on VHS I felt like I was watching something absolutely real and I think the new blu-ray is a little too clean to have the same effect.  Although, I’ll admit it is hard to judge objectively since I’m so desensitized to being frightened by movies at this point in my life.

On the downside there are moments in the film where the high definition makes Leatherface’s mask and the grandfather’s costume look pretty goofy.  However, on the other hand there are some really beautiful shots that I’m sure you lose on VHS.  For instance there are amazing zoomed in shots of Marylin Burns that are so clear you can see tiny veins in different layers of the white of her eye.

Special features: I purchased the bare-bones version of the film which contains four audio commentaries, which are usually the only special features I care about.  Fans who want anything beyond these commentary tracks will want to look into the multi-disk version of this release.

Bottom line: I bought this disk for $15 which I think is a reasonable price for a blu-ray which is probably the highest quality release of The Texas Chainsaw Massacre available.  In my heart I really believe the uninitiated would be better served to hunt down the oldest, grimiest, and most beat up VHS copy of this movie they can.  However, I think this anniversary edition blu-ray is one that long-time fans will definitely want to have.