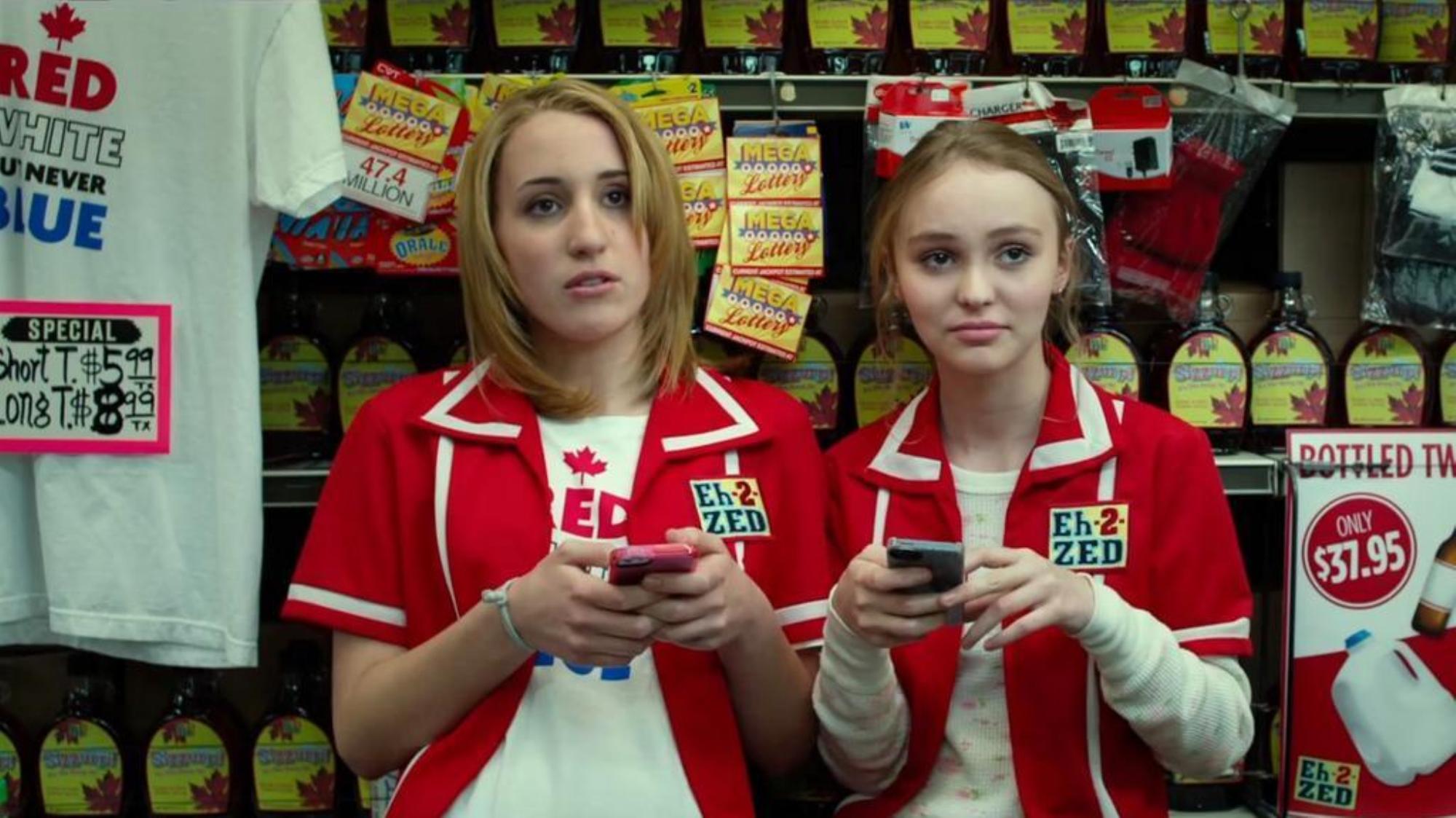 2015 was an outstanding year for horror all around. With Mark Duplass in a wolf mask, horrifying Austrian children, teenagers being haunted by their sexual exploits and mustachioed Kurt Russel in all his glory, there was so much to enjoy about this past year it’s hard to overstate how much we at Bloody Good Horror loved this past year. But alas, there comes a time to move forward and put the past behind us. Let’s take a look at some of our most anticipated films of 2016:

The slurry of absolutely unwatchable Amityville movies makes it very difficult to simply say that a new one is worth watching on name alone. However, there are some really interesting things about this new Amityville film that makes it one to keep your eye on not the least of is Maniac 2012 director Franck Khalfoun being at the helm as well as the always welcome appearance of Jennifer Jason Leigh.

In 2013, the short film Lights Out won the Who’s There Film challenge. As a result this short film got passed around the internet with quite a bit of fanfare. In July we are getting the full version. It remains to be seen whether the director can maintain the palpable sense of terror that’s present in the short film, but I for one am fascinated by the prospect.

A teenage Leatherface. Is this a great idea or a terrible one? This could easily go the way of Rob Zombie Halloween with a teenage wearing someone else’s face while crying to Love Hurts by Nazareth, but with the director team of Alexandre Bustillo and Julien Maury who brought us the grizzly and visceral Inside there is a chance that this could be a return to form for our favorite chainsaw wielding maniac.

It’s been a while since we’ve gotten a great Stephen King horror entry in film form. The Mist you say? That will be nine years ago this year. Yes, you’re old, but rest assured that at least you can remember a time when our old uncle Stephen dominated the horror landscape.  So perhaps, it’s time we got another fantastic horror film from the master, and with both John Cusack and Samuel L. Jackson signed on, things are looking up.

Most of us remember a time where a horror centric film from Kevin Smith would not be something anyone would be looking forward to. However with the bizarre gleefully grotesque antics of Tusk and the somber religious narrative of Red State, many in the horror community are wondering if they are beginning to see a birth of a unique voice for the genre. Surely, Johnny Depp wearing that prosthetic nose for an entire film will be worth the price of admission alone.

Boy meets girl, girl commits suicide, boy meets another girl; girl who commits suicide comes back to torment them. This is the premise for this UK horror/romance/comedy that’s getting a limited release in the United States this year. This is the sort of niche horror/comedy that could be gold or garbage, but it’s worth looking out for in 2016.

The fact that this is the first horror wide release of 2016, makes this film worth paying attention to alone. The always captivating Natalie Dormer takes the lead in this tale of Japan’s notorious “Suicide Forest” and its supposed haunted machinations, this may well be just another trite entry in the ghost genre or it could be what kicks off a fantastic and groundbreaking year of horror.

This is Gore Virbinski’s first return to horror since his absolute classic, The Ring, in 2002. The film stars Jason Isaac who travels to the Swiss Alps to retrieve his boss from a therapeutic session only to find a more disturbing plot a foot. As more details become clear and with the talent involved this is the type of film that could become more and more intriguing as we move through 2016.

Speaking of The Ring, we are getting the long awaited next chapter. Is it possible that we may finally get the sequel fans of the original have always wanted? There is plenty of reason to be worried not least of which is a lack of Naomi Watts, however if you’ve seen the new director F. Javier Guttierez’s 2008 apocalyptic film Before the Fall, there’s also a lot to be hopeful for.

The Boy is one of those films that has a premise that is undeniably creepy. Anytime a film is focused around a living doll of any sort it’s hard not feel that awful pit in your stomach and with the stunning Lauren Cohan on screen there’s zero chance I’m not seeing this on the big screen, even with the knowledge that the director who headed the woeful The Devil Inside is at the helm.

Oh Rob Zombie, how you’ve hurt me. Yet, I will always come back to you, because you simply represent a singular and unique vision. Also, the premise of this new crowd funded film promises a ton of blood drenched kills as it follows five carnies fighting for their life in 1976 against a never ending stream of murdering psychopaths. Zombie is at his best in the dark and violent and this may be just the sort of material.

Frank Grillo is back! That’s all I need to hear to be ready for the Purge 3. The Purge: Anarchy of course had its flaws, but it was at its best when action was going on and that is thanks to the punisheresque murder rampage stylings of Frank Grillo.  With the setup of that characters motivations already handled and out of the way I am very hopeful that this chapter could give us a visceral, nonstop horror/action rampage.

Everyone is scared that this might be the next Abraham Lincoln Vampire Hunter, and for good reason. Seth Graham-Greene after all wrote both books, they’re both comedy/horror/period piece mashups. Except with Lena Headey involved and the striking Lily James looking poised to kick some serious ass this could be a flat out hilarious zombie killing good time.

People in horror movies who don’t pay attention to the one rule that the mystic tells them they must follow make my eyes roll, however there is a certain creepiness in this films trailer that makes me believe that this might be a cut above the normal supernatural haunting movie. Lead by Sarah Wayne Callies of Walking Dead fame, this could be a memorable entry this year.

Welcome to the Wanaverse ladies and gentleman. Here you will see such sights as spooky ghosts being reflected in mirrors, shaky shots of people with panic in their eyes, dolls being creepy and the color red. All of those things being said James Wan produces consistently solid mainstream horror movies, and with the return of both Patrick Wilson and Vera Farmiga playing The Warrens and covering one of the most renowned hauntings in Britain’s history there’s a great chance this could equal the first in every way.

At first this might appear to just be another scary kid flick. However this is a lot lurking beneath the surface of this film that might prove out to be something special. Not least of which is the director Mike Flannagan with a bigger budget, and when you consider some of the things that he managed to do with Occulus this is a fascinating prospect. Also it’s a return of Thomas Jane to the genre as well as the plot which revolves around a child whose dreams and nightmares both come true unwittingly. This is fertile ground for some really unique horror indeed.

Midnight Special may not be strictly a horror film. However, there is a long tradition of children with powers or believed to have powers being hunted in the genre including the classic Firestarter and Dean Koontz’s Servants of Twilight. This could easily be the next great film in that sub-genre especially with the always interesting Jeff Nichols directing and Adam Driver, Michael Shannon, Joel Edgerton and Kristen Dunst involved. There is a lot here for any genre fan to be salivating over.

It’s always great to see what appears to be a new promising horror anthology film. This is a film that was shown at the Toronto International Film Festival and has gotten a lot of love from critics including some comparing it to Creepshow. That seems like lofty praise and highly suspect, but we are going to quickly find out as we will get a chance to see this on VOD on Feb 9th.

An aspiring model moves to LA to kickstart her career, instead her vitality is drained by others who are desperate to take every ounce of life she has. Sounds a lot like 2014’s Starry Eyes, however with Nicholas Winding Refn in the director’s chair this is certain to be distinctive especially with Keanu Reeves and Jena Malone in the starring roles.

First time director Robert Eggers won the directorial award at Sundance this year for what appears to be a beautifully shot period piece with tangibly creepy atmosphere. The word on the street is that this is one of the most beautiful and intense horror films of recent memory. It’s hard to imagine that it could top last year’s magnificent It Follows, however the setting, tension and chilling beauty evident in the trailer suggests it may not need to.