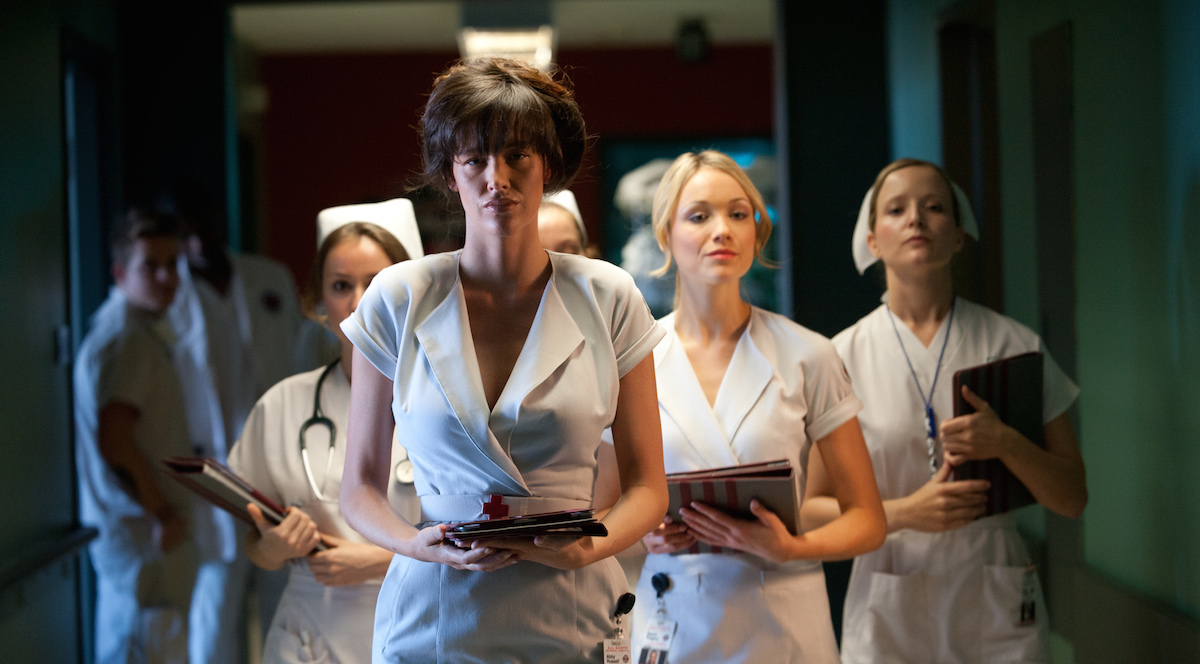 (Editor's note: Over the rest of this week and next we'll be rolling out our staff picks for the best in horror from 2014, leading up to the official BGH Best of 2014 list and the Year in Review podcast. Enjoy!)

2014 feels like a really weird year for horror. Between theatrical releases, DVD, VOD, and streaming services the genre has become a really confusing thing to keep up with. On top of that we had a few releases this year that I uncharacteristically refused to watch because they just flat out looked too dark for me ( “Proxy” and “The Seasoning House”) and I more or less stopped watching found footage all together because I honestly can’t take it anymore. Not a lot of movies really stood out to me this year, but at the same time I feel like I’ve missed a dozen or more titles because I can’t get access to them yet, or just because I didn’t have time due to the absolute mountain of horror releases that hit in 2014.

1. Witching and Bitching - Alex de la Iglesia follows up his fantastic film The Last Circus with another great entry into the horror genre.

2. The Babadook - I really love the image of a child's pop-up book turning into a demon-summoning grimoire, plus the story is as intelligent as anything I've seen in recent memory.

3. Snowpiercer - Unlike similar religious allegories that tend to explore the nature of reality, Joon-ho Bong focuses in on Gnostic Christianity’s absolute demonization of all things government.

4. A Field in England - Ben Wheatley pays homage to Alejandro Jodorowsky, as well as the Japanese horror masterpiece Onibaba, with a tale of alchemy, magic mushrooms, STD’s, and fairy circles.

5. Only Lovers Left Alive -  A meandering meditation on decay and relationships that feels like a great counterpoint to frantic found-footage drivel and paint-by-numbers films that are forced into a neat, three-act, ninety-minute package.

6. Under The Skin - I might not have necessarily enjoyed it a lot at the time, but this might be the movie of 2014 that sticks with me the longest after watching it.

7. Nurse-3d - This tongue-in-cheek sexploitation/slasher is way more fun than I expected and hopefully gets a sequel with a better ending.

8. The Purge: Anarchy - Part two basically delivers what the first one didn’t.

9. Oculus - I would have liked this movie a lot more if it hadn’t been for the male lead and an ending that was telegraphed well before it happened.

10. Godzilla - This certainly didn’t stack up to Pacific Rim in my estimation, but I can't help being excited about giant lizards smashing cities.

1. Leprechaun: Origins - This is the worst entry in the franchise aside from Leprechaun: Back 2 Tha Hood, and it felt a lot more like another parody from Cabin in the Woods than an actual movie.

2. Spike Lee’s Oldboy - Quite possibly the most pointless remake of all time.

3. Dracula Untold - It’s hard not to be pissy about a Dracula movie that draws more from modern video games than it does classic vampire films.