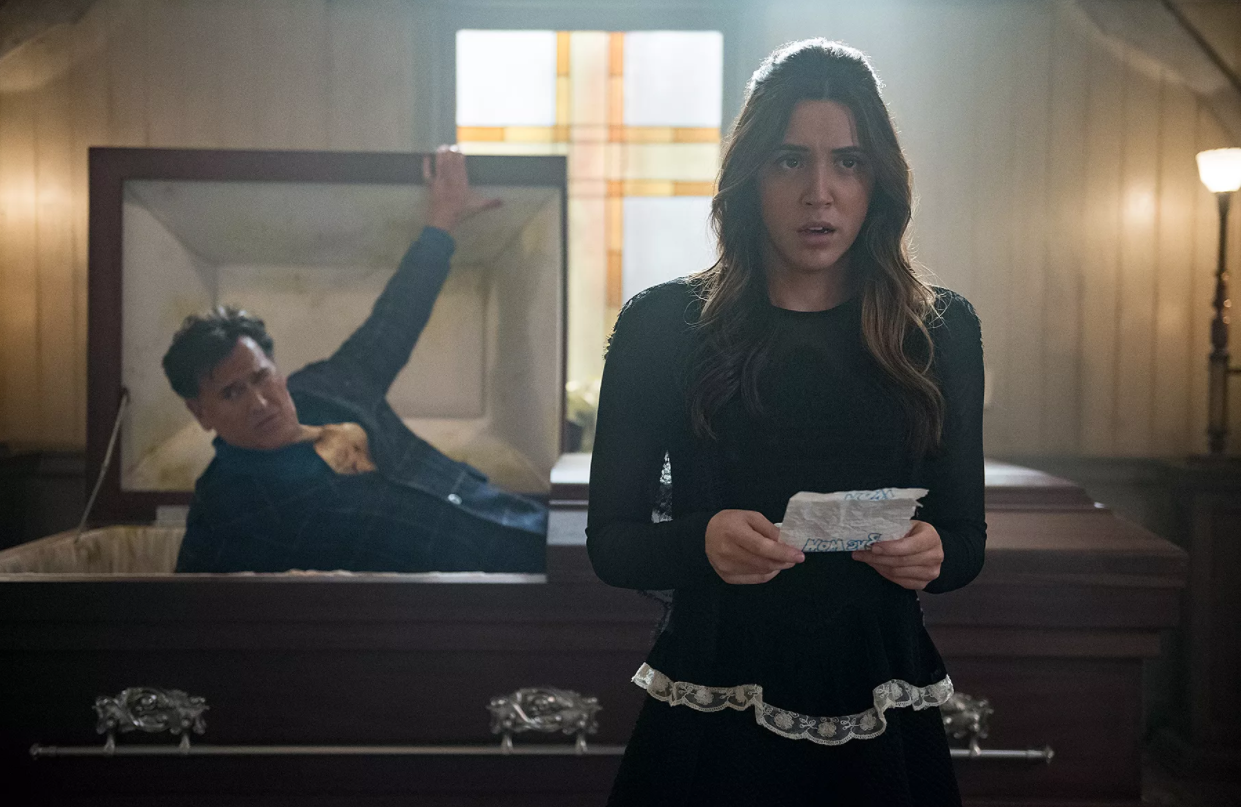 This week's episode of Ash finds our hero and his newly-discovered daughter both dealing with the death of his wife, her mom, in their own ways. While Brandy is trying to sort out what to make of her life now that her mother is gone, Ash is busy re-killing her. If you ever wonedered what it would be like to invite Ash to a funeral, now you know. And it isn't pretty!

Recapping Ash vs. Evil Dead week after week has been an exercise in finding new ways to talk about the awesome bloodbath that is this show. If I think it’s hard to keep things fresh after two full seasons, imagine how the writers must feel. Here again, however, we have something that makes Ash special.

Traditional TV and stream services are littered with shows that were created around a really cool idea, that got people hyped, and then weren’t able to sustain their power; shows that got too ambitious or too comfortable. Ash vs. Evil Dead, however, seems to live in a category all its own. There are episodes of this show in which the plot is not very strong - the pilot of this season is a good example. Yet even when this is the case, Ash manages to be fun to watch and keeps this reviewer looking forward to its shenanigans week after week.

So how is it able to do this? My argument would be that the team of creators behind Ash vs. Evil Dead know exactly what they’re doing. It’s secret strength is a reason a lot of other shows fail. This is a show where the plot seems to exist largely to service great action set pieces. While the same might be true for other shows on the air, it is rarely the case that those shows are able to so consistently deliver amazing set pieces. Worse, it often appears that the people in charge don’t realize this is true about their show, and so they bog it down so heavily in mediocre plot that by the time the set pieces come around, they don’t satisfy.

With Ash, though, it may feel like going back to the well most weeks, but the well never ceases to be refreshing. The success of this show is due in no small part to the love that fans have for Bruce Campbell as Ash and his charming performance that continues to feel fun as the episodes pile up. And as long as all of the hijinx and plot mix ups allow the audience a chance to see him fighting Deadites in morgues, in sperm banks, and in a coffin, who can say no to that?