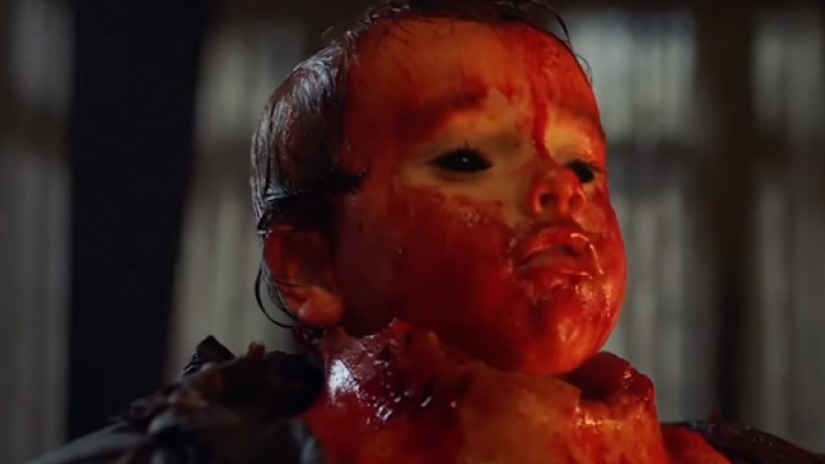 In a show where battle lines have been drawn and redrawn, “Baby Proof” is an episode that concerns itself with picking sides. Will Pablo choose the darkness or the light? Will Brandy choose Ash or the woman who she believes is a supportive guidance counselor….but whom we know is the incarnation of an ancient evil?

This episode begins in media res; we have a Deadite Pablo trying to get to Brandy and Kelly in Ash’s trailer and we have Ash stuck in Ruby’s house of horrors with the foreign tourist that Ruby has been holding hostage to feed to her terrifying spawn. Plus, that poor Knight of Sumaria who died last episode is just a stuck Deadite, impaled on a tree!

After making it into the fortified trailer and being stabbed with the Kandarian dagger, Pablo goes to another spiritual plane where the Brujo is waiting for him. He tells Pablo that he has the potential to become an even more powerful force, if only he can complete the challenge. Pablo must literally choose which bowl of blood to mix his own with, that of his family or that of the darkness. As this is happening, Pablo’s body remains tethered to the physical realm and he isn’t looking too good.

Meanwhile, across town, Ash, desperate to prove to Brandy that Ruby is evil, is running around handcuffed via a heavy plaster sink to a petrified woman who doesn’t speak English. And he is doing all of this while trying to capture the demon baby that he has just discovered is half his doing.

By the episodes end, we have a super powerful Pablo, a Kelly who has realized her feelings for Pablo only to be sort of snubbed, and finally we have Brandy calling Ash “Dad”! Does this mean that our dream team is back and better than ever? I guess you’ll have to wait until next week to find out!