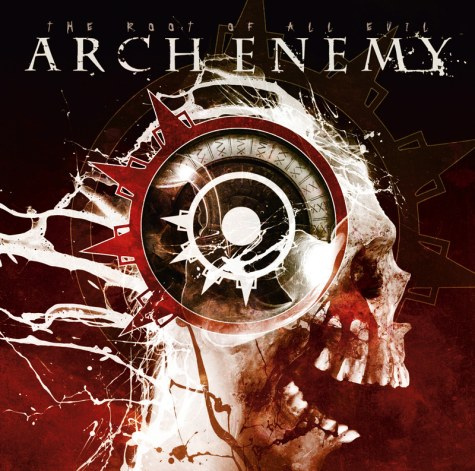 Arch Enemy - "The Root of All Evil" Review

Arch Enemy’s “The Root of All Evil” is an interesting study. It has all the tenets of typical European death metal fare, but at its darkened and fiery center beats an irrepressible heart of old-school thrash. Beneath the prominent blast beats and screeching vocals is an album that features intricate and calculated guitar work, down to earth riffs stretched over simple but infectious rhythms, and an integrated understanding of powerful metal themes.

Like so many of the great metal albums this year, “The Root of All Evil” knows when to let off the pedal. I’ve said it before, but it bears repeating; it’s far too easy for a death metal band to get caught up in being faster/louder/angrier. Sometimes, to let the music simply flow without forcing the issue can be the crowning achievement of an album. Arch Enemy has constructed a piece that does just that.

While the album starts off with the usual double kicks covered with ominous, cacophonous guitar lines, the noise in the first half of “Beast of Man” gives way to a smoother, more rhythmic brand of guitar metal, reminiscent of their fellow Swedes Soilwork. The same applies for “The Immortal” which quickly becomes a headbanger’s paradise of guitar solos and powerful drum work.

It is in these moments that “The Root of All Evil” truly shines, as opposed to the verses where the blast beats drown out any semblance of a pattern, and the screaming becomes, frankly, annoying. When the Amott brothers are set loose to play solos, and the music settles into a charged but controlled frenzy, Arch Enemy creates a sound that is hard to ignore.

The jewel of the album is “Demonic Science,” which combines all the effective pieces and manages to minimize the lesser ones. It has a pulsing, curious guitar line punctuated with almost placid breakdowns and bridges. The song is the album’s best example of Arch Enemy’s ability to run the gamut of metal themes from one end to the other.

“The Root of All Evil” has its flaws. The nature of the top speed tempo and the totally indistinct and unintelligible vocals make some of the songs difficult to tell apart (“Diva Satanica,” “Bury Me an Angel,” for example.) Additionally, the songs like “Dead Insanity” where Arch Enemy tries to push the death metal sound, can fall a little flat or feel forced. The album as a whole, while possessing many interesting parts, does little to address the problem endemic to death metal, which is that it’s very difficult to get it stuck in your head. There are no real hook riffs, and very few toe-tapping, catchy pieces.

Still, there’s a lot of good here, if you’re a discerning metal fan with the patience to really listen. I thoroughly enjoyed the relentless persistence of a song like “Dead Insanity,” which retains a semblance of musical cohesiveness while still being unpolished, angry and punishing. The sheer variety of metal found wrapped within this death metal album is worth a listen. A song like “Pilgrim,” has all the nastiness of the blackest metal, but contains one of the simplest, most effective chorus breakdowns on the album. It’s that kind of versatility that sets “The Root of All Evil” above common death metal. The ability to weave in and out of those sections is worth the price of admission.

“The Root of all Evil” is both head-banger and neck-breaker. It’s a demonstration of metal both as a versatile musical genre and an unforgiving, unrelenting jackhammer. It wanders a little in spots, but if you’re a fan of death metal, speed metal or thrash, check it out.