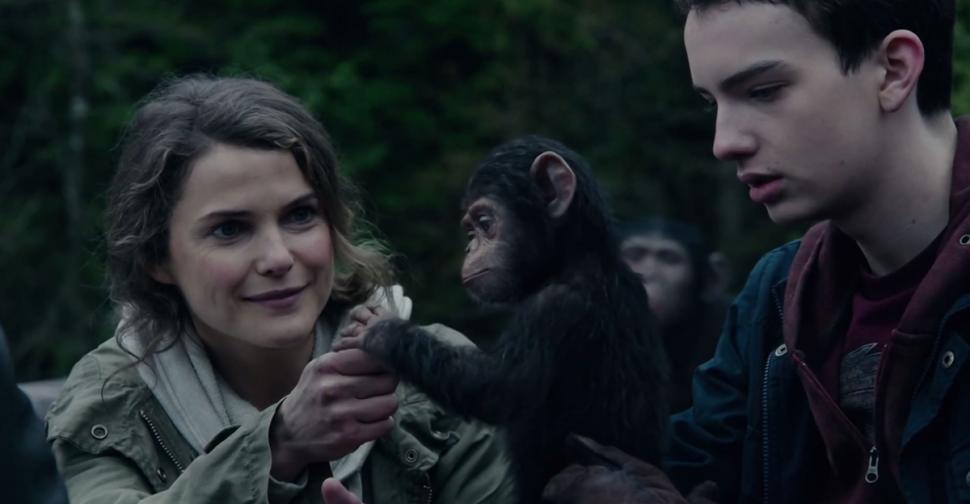 Apes in Earrings: The Gender Problem in Dawn of the Planet of the Apes

Like most horror, fantasy, and science fiction, “Dawn of the Planet of the Apes” requests it’s audience place a hefty ante. You guys, anthropomorphic, equestrian apes: you in or out?

And it’s a price more than a few are willing to accept as evidenced by the film’s financial and critical success. When comparing the poster for this entry in the rebootchise (Rey-Boot-Cheese) with its predecessor its apparent the studios involved are exhibiting every bit of confidence that comes from orchestrating one of the biggest surprise hits of recent film history. The success of “Rise of the Planet of the Apes” is the difference between you shrugging it off or doing a fist pump when you glimpse a chimpanzee riding a horse raising a rifle over its head foregrounded against a disintegrating Golden Gate Bridge.

Much of this acceptance is due in large part to the performance of Andy Serkis as Caesar, Matt Reeves’s direction, the motion capture players, and the film’s effects department. Concerns of verisimilitude aren’t the issue in “Dawn of the Planet of the Apes”. The film’s technical attributes are even more dialed in and impressive than that of “Rise”. All of this is, ostensibly, in service of a narrative that rather deftly juggles audience allegiances, connections, and identifications with some nuanced grace. As Keith Phipps has stated in his review for the film, even the villains are not inherently villainous but operate within their own histories and lived experiences. No one or animal need be seen good or bad. At the tale end of the human apocalypse morality is a question of cooperation or violence.

The strength of “Dawn” is that it does not engage in a debate over what makes humans and animals different. That is not the world in which “Dawn” is set. Such issues are almost entirely circumvented for broader and perhaps more terrifying concerns of conflict resolution, violence, and peace making. As the film intercuts sequences of human and ape discourse the similarities become swiftly apparent. As the militant ape Koba (Toby Kebbel) recalls torturous laboratory experiments, better known to the site’s regulars as “Brian Cox Monkey Jail”, a suspicious human named Carver (Kirk Acevedo) remains unconvinced of Caesar’s open display of human level intelligence while harboring resentment for the “Simian Flu” which wiped out most of the population. The motivations and actions of humans and apes begin to mirror one another as they crescendo into an evocative elegy that does what the best science fiction does and turns a mirror on a particular society.

All of this is not possible unless the film effectively convinces us of the Apes’ status as a civilization. Such is the opening 30 minutes of no audible dialogue, a sequence for which Reeves successfully argued. As a coordinated hunt begins, a rather bold allusion to Kubrick’s “2001” creeps into the score giving a slight nod to Gyorgy Ligeti’s work which bridges the earlier sequences of that film’s proto-human into the fully capable space age of the future. And while “Dawn” isn’t sending us to the cosmos it is drawing a comparison and attempting to put us in a space were our ability to identify with this civilization is plausible. The sequence is quite viscerally exciting as well as technically astounding in its attempts to accomplish exactly what it needs to do.

As the sequence continues “Dawn” becomes somewhat more limited in its address of this identification problem. Indeed, the film’s key iconography with which it establishes empathy and sympathy for the ape colony is founded in procreation and a rather dull father/son narrative between Caesar and his son Blue Eyes (Nick Thurston). Following the hunt sequence, Caesar returns to the Ape encampment where his mate Cornelia (Judy Greer) has just given birth to another son. It’s a scene that invokes an array of domestic and gendered visual cues from a long tradition of patriarchical fiction. The Apes have officially decided to birth indoors, surrounded by other females, wearing the only semblance of jewelry in this society. That this form of domesticity stands as an ultimate signifier of emerging civilization is something the film's guiding principles take for granted. Would this Ape Colony exist in the way it does without procreation? Most likely not. And this is something that is emphasized in Weta's digital ability to convincingly swarm the screen with them while human characters have more than a couple of lines emphasizing how many Apes there are. But the numbers game here beguiles a presumed "natural" way for civilizations to exist and develop complete with “sons”, “fathers”, and “mothers”.

It’s a bit too obvious of a critique to make. After all, this is a Hollywood bankrolled movie looking for a very particular, very broad market share. But the problem here is that the connotation of civilization in “Dawn” is predicated upon those incredibly persistent gendered terms in which males/men do and females/women serve. What’s more, these roles persist to some degree in the human side of the film. Other than a quick glimpse of a single woman soldier defending the human colony, there are very few representations of women doing, well, anything. Ellie (Kerri Russel) proves to be a capable and useful character, calling upon her experience with the CDC to get the group out of more than a few jams. However she’s given little else to do save for worrying fiercely for human protagonist Malcolm (Jason Clarke).

“Dawn of the Planet of the Apes” paints itself into a rather tiny ideological corner that it is unable escape. Despite the film’s ability to create a technically engaging world of broken, believable, and human characters, it sidesteps an opportunity to discuss how humanity constructs the idea of “civilization”. And while this isn’t necessarily a fault on the part of Reeves, the screenwriters, or even the studio, it does gesture to how dim and short-sided the possibilities are in mainstream speculative fiction.

Related Content:
Episode 296 - "Dawn of the Planet of the Apes"