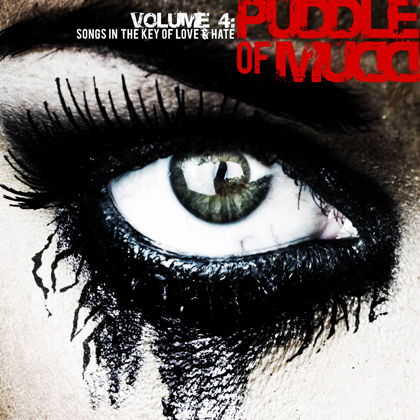 Album Review: "Volume 4: Songs in the Key of Love and Hate" by Puddle of Mud

First off, a confession. When Puddle of Mudd burst onto the scene in 2001, my first thought as a good nerd was that they were making a reference to the Star Trek character Harry Mudd. Turned out not to be the case. I immediately thought less of the band. They’ve done little to

improve my perception since then, and “Volume 4: Songs in the Key of Love and Hate” is no exception.

Have any of the bands that Fred Durst discovered or organized been worthwhile on any kind of serious musical level for more than fifteen minutes? Durst may be personally liable for more inferior rock music than any other single man in the last twenty years. Not to mention that many of the acts he fostered led to the slow but sure mainstream bastardization of heavy metal, which has driven us, as the true fans, further into the shadows.

Puddle of Mudd continues to be a vain and immature attempt to prolong the viability of the grunge sound, but their idiom is all wrong. As opposed to genuine angst or the confusion of adolescence or the horrors of drug addiction, “Volume 4…” plods along a path of, as the title suggests, love and hate. We all know the many facets that denote the complexity of love, and the ferocity with which the human heart can harbor loathing, but Puddle of Mudd tackles these issues on a much more pubescent level, never rising above the emotional lowest common denominator.

The single “Spaceship” is a singularly awful song, as it remains musically flat, and thematically undeveloped. The song is a musical version of exactly the kind of proto-masculine drivel that Henry Rollins spoke of in his spoken word track “Maturity.” There may have been time in my heady, hormonal youth that this would have held more interest for me. Or, this would have been a song I’d have expected from the band when they debuted eight years ago. Instead, it serves only to show the bands lack of growth and subsequent depth. The single holds no appeal for me musically or intellectually, and this coming from a man who thinks “Dirty Deeds Done Dirt Cheap” is a masterpiece.

‘Literally’ is one of the most misused words in common English, but Wes Scantlin sounds like he is literally singing through his nose on “Volume 4…,” even more than in previous efforts. I don’t know if he’s consciously or accidentally going for “Layne Staley with a sinus infection,” but the effect is jaw-grindingly bad. It makes an otherwise predictably mediocre song like “Keep It Together” and makes it nigh impossible to stomach.

Aside from its juvenile attitude, where "Volume 4's" wheels really come off is the music itself. The band's sound has been marginally altered to reflect a thinner, more punk based sound, but it ultimately makes no difference as the very structure of the album is clichéd and stale. The entire effort is exactly what you've come to know from mainstream alternative metal. It's the same verse-chorus-verse repetition we're all familiar with. The guitars may indeed by sharper, and the beats heavier on snare, but the end result is much the same.

Buckets and buckets of people are excited for this album. I am not among them.