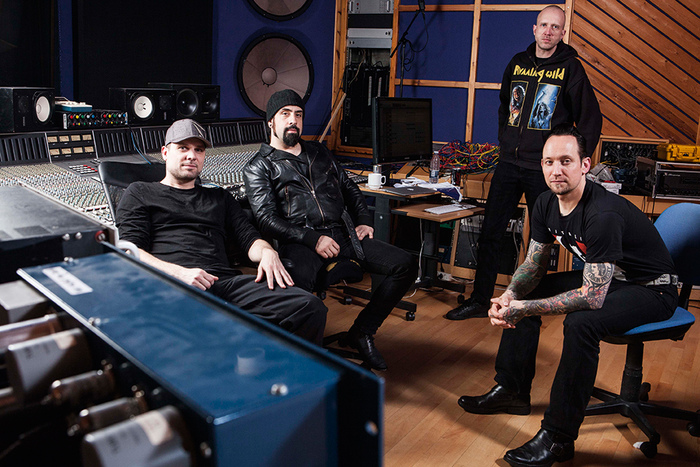 Even after repeated listening, it’s difficult to give this album sort of cohesive context. That’s not necessarily a bad thing, as it speaks to the creative and musical range of Danish rock/metallers Volbeat. They’ve been taking the world by seeming storm, and their rapid ascension is at least in part attributable to the wide range of talents they can showcase.

The other side of that edge though, is a lack of stand-out individuality. Volbeat’s obvious fandom of the classic rock/punk/metal acts that preceded them can be squeezed out of each track on “Beyond Hell/Above Heaven.” In paying homage however, the band never puts forth a swaggering individuality that would have really set them apart. It’s almost as though Volbeat is striding along in a pair of impressive, but borrowed boots.

From beginning to end of “Beyond Hell/Above Heaven,” you can pick out the moments where they channeled some of their favorite bands. From KISS to Metallica, Anthrax, Collective Soul, the Stray Cats, the Misfits, rockabilly tropes from all sides and a small flotilla of others are readily evident. Naturally, frontman Michael Poulsen’s continuing and encompassing fascination with Elvis Presley colors almost every song, as his vocal presence is a recognizable imitation of that forefather of rock.

All that makes it sound like “Beyond Hell/Above Heaven” is a sub-par album, but quite the contrary is true.

Volbeat began to make headway in the larger American music conscious while opening for Metallica on the “Death Magnetic” tour in the second half of 2009. The confidence gained from that experience is evident in this newest work, as each cut brims with a tangible aplomb and the resulting product is easier to get swept up in. Of course, a certain necessary element of humility remains, as reflected in the charming and humble “Thanks” at the very end of the album.

Despite the lack of a dominant musical idea, the album doth runneth over with exciting and unique musical ideas, such as the blending of banjo and metal in “7 Shots.” It remains refreshing in any age to see a band of a particular genre (in this case, metal,) display willingness to go out on a limb and blend elements of music not commonly associated with their genre’s idiom. Thus, the harmonica seeded throughout “Heaven Nor Hell” borders on genius. The swinging guitar riffs on songs like “A New Day” become akin to viewing metal through a rock and roll lens not too often utilized in modern forms of the music.

In truth, there are very few, if any, bad moments on this album. The production and overall mix are excellent, especially given the eclectic range of songs, from the bright and shiny “16 Dollars,” to the nasty, visceral “Evelyn” (featuring Napalm Death’s Mark “Barney” Greenway on guest vocals.) Final production aside, the instruments are played with a determined, keen, snap, which lends the album a brisk feel.

There’s not much to say for album flow here, since a sauntering, slow-gallop like “A Warrior’s Call,” can dovetail into the airy, unquestionably poppy “Magic Zone.” There are a few transitions just this side of train accident, but on an album so diverse, it could be part construed as part of the charm.

If there is a final drawback to Volbeat’s fine and newest effort, it’s Poulsen’s singing. Not that it ever becomes irritating; rather, his vocals lose their novelty over the course of the album, as his would-be Elvis routine grants him only limited range. Essentially, every chorus is similar from a vocal standpoint, and he does not or can not lend a more hopeful or conversely, more menacing tone to a song by altering his standard. Despite his best efforts, Poulsen’s accent does occasionally poke though, most notably during the chorus of “7 Shots.”

Metal purists will likely shy away from something with so much pop appeal that panders to a wider audience, but their close-mindedness will cost them. “Beyond Hell/Above Heaven” is an album that blends all the musical children of blues into something that might not express a strong, single aura, but succeeds on the more important level of just plain being catchy and fun. This is original music composed and performed by musicians with a refreshing honesty and clear, evident passion for what they’re doing. The album isn’t life altering, but damn it, it’s different, and in this case that’s enough.