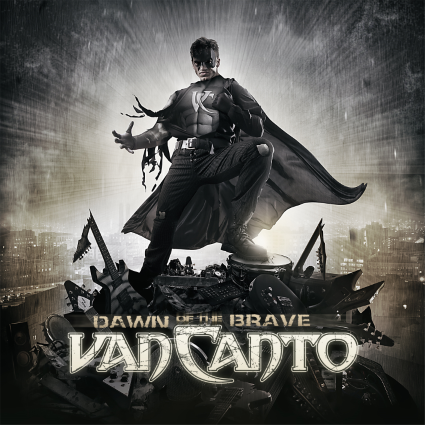 Normally, I'm not one who goes for gimmicks in music. I find them tacky, and mostly useless appendages that try to mask a band's deficiencies. Taking a cookie-cutter band and dressing them up in stupid costumes, or writing lyrics about only one subject, doesn't make them any more special. Gimmicks usually expose the band's shortcomings, because the obvious facade only draws attention to their perceived need to distract. I can think of very few bands with a gimmick who have managed to keep my interest, because a gimmick alone is going to get old after a while. Yes, even if you're GWAR.

One exception to that rule is Van Canto, who are a gimmick band, but their gimmick is so unique, and such a radical departure from the norm, that they truly exist in their own world. The idea of playing power metal without any instruments besides a drum set is so ludicrous that it must be heard to be believed, and once you hear it, you almost can't believe your ears. Over the course of four albums, Van Canto showed themselves to be a proper band, in all respects but their lack of guitars. I will admit my skepticism the first time I heard one of their songs, but I soon realized the genius of what they were doing.

The most amazing thing about Van Canto has nothing to do with their songs, but with the fact that they're able to make you forget they are doing everything but the drumming with their voices. If you aren't paying close attention, you would swear they were a band like any other. It is remarkable that they can do this, and a testament to how they rise above their gimmick. Yes, it is integral to their identity as a band, but they aren't trapped by it. If anything, the lack of instruments gives them more flexibility to mold themselves to fit their songs.

The problem with this approach is that Van Canto has yet to give themselves fully to their music. “Dawn Of The Brave”, as usual, contains covers of legendary metal songs. These songs are the ones that come up short, because we know what they're supposed to sound like, and the lack of guitars stands out in comparison to our memories of the songs. The cover of “Holding Out For A Hero”, written by the incomparable Jim Steinman, is the exception. His songs are overly dramatic, as it Van Canto's approach, so they mesh together well. It's the sort of ludicrous experiment I'm sure Steinman will appreciate.

The songs Van Canto writes for themselves are better, because they are tailored to fit their approach. “Fight For Your Life” is a great power metal song, with a sticky chorus and some nifty riffs in the bridge, if you can call a vocalized section a riff. They manage to change up their sound, going from power metal in the aforementioned song, to symphonic in “Badaboom”. The range of styles they can produce is impressive, and is another feature that keeps the record from becoming a joke. “Steelbreaker” isn't my kind of song, but they manage to make the heaviness sound better than most seven-string guitars. That's worthy of some kudos.

In total, “Dawn Of The Brave” achieves something; the ability to be judged simply as an album. Taken as such, it's a good record, but one that could have been made better. The original songs are good, some even better than that, but the classic metal covers take me out of the experience. As it stands, the album is fun, but without them, “Dawn Of The Brave” would be even better.