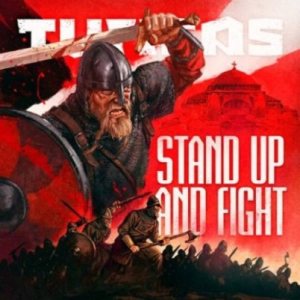 If “Stand Up and Fight” can’t make you smile at least a little, you’re taking yourself way too seriously.

Turisas manages to triumph valiantly on this new album through a combination of gigantic attitude, sense of the moment, dramatic construction and no small amount of rock and roll sensibility.

“Stand up and Fight,” is roughly centered during the Byzantine Empire of the Middle Ages, and the fantastic throwback cover art illustrates the point nicely. The themes do stray from that material, as television is mentioned at least once, and there’s an entire song about sailing and hunting pirates. (Swashbuckle had best look over their shoulder.)

All of that aside, what Turisas has brought to the table is an energetic, impeccably arranged, and wonderfully infectious effort that meets at the unlikely crossroads of arena rock, battle march and Bach-ian church composition. While the band has coined the term “battle metal” for themselves, I can safely say that “Stand Up and Fight” is the closest thing I have ever heard to metal opera, even more so than fellow Finns Nightwish.

Bringing in an orchestra and a choir was a brilliant first step in making the drama and grandeur on “Stand Up and Fight” authentic. The second blended element that makes the album work so well is the incorporation of easily accessible and recognizable musical ideas. Not so dense as most folk metal, Turisas keeps things moving by using simple riffs and a persistent but not punishing drum beats. By way of example, “Take the Day” sounds like a combination of the cadence from “Eye of the Tiger” and the chorus from Triumph’s “Hold On,” but wrapped up in overdriven guitars, full choral accompaniment and red and black face paint. It can’t be denied; the 1980’s has its hands all over the roots of this album. 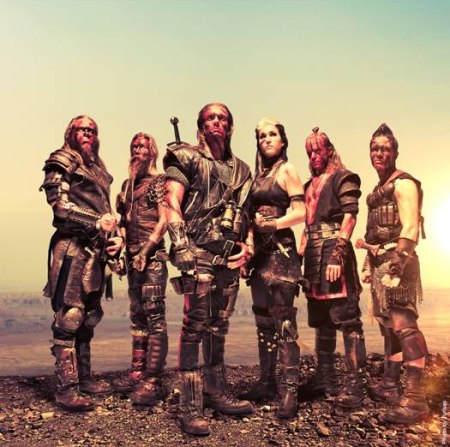 “End of an Empire” is one of the most spectacularly grandiose pieces of metal composition in the genre’s history. Period. The synthesis of rafter shaking orchestral arrangements, galloping non-stop rhythm from the band, and peerless theatrical buildup allow the song to properly capture the fall of one of Earth’s most influential eras.

Going backward through the cuts, “The Great Escape” is right behind “End of an Empire” for effective decadence, ending on a peaceful and elegant bit of piano outro. It doesn’t hurt that it sounds a little like the rallying theme from “Monty Python and the Holy Grail.” “Venetoi! – Prasinoi!” manages to capture the thundering feel of a chariot race, with a blistering drum and sharp, staccato horns.

“Stand Up and Fight” is best heard with eyes closed and imagined as a stage performance. While there aren’t “acts” like one might find in a top notch play or musical, there are colorful characters, dynamic stories of daring victory and crushing defeat, dramatic choruses, powerful soliloquies, perfect execution and through it all, some very pure heavy metal.

This album is so deliciously over the top and at the same time such a product of Turisas’ dedication to craft that it’s quite unlike most everything else out there for musicality, spirit and spectacle. What’s more, the music has a mightily charged and optimistic twist, to go along with all the lyrics about loyalty, conquest and perseverance. It is an uplifting journey, particularly if you’ve just had an awful (or boring) day. I can’t help it; “Stand Up and Fight” makes me smile, and not just because the album is dipped in showmanship and covered in metal. I ran the first cut, “March of the Varangian Guard” by a friend of mine, and he said in response: “I sort of want to join a Roman Legion now.”