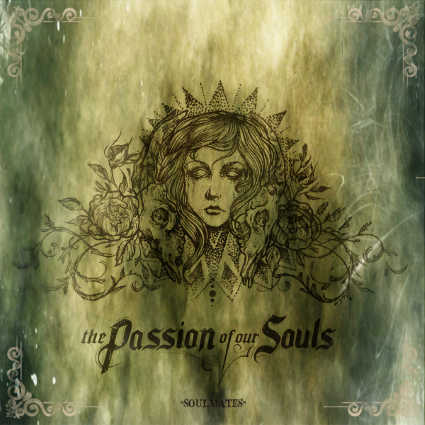 Album Review: The Passion Of Our Souls - Soulmates

Let us take a moment to stop and ask a rather odd question: what is death metal? It seems sill to be asking such an existential question about a genre that is close to thirty years old, but I'm not sure anyone has ever figured out what the true essence of death metal is. Is it the growled vocals that define death metal? The riffing style? The dark and disturbing subject matter? Some combination of these elements has been needed to truly be considered a death metal release for as long as I can remember, although I can't recall ever hearing an exact formula be spoken of. There are countless examples of death metal that stretches out from the tradition, but seldom in the way that The Passion Of Our Souls does.

This project is a bit of a crisis of faith for some, a deep questioning of the very heart of death metal. What we encounter with this EP is not death metal as we have ever known it, but rather a form of the music that is dedicated to love. No, not the love a serial killer feels for his victim. Honest to goodness love.

“Give Me Your Soul” rips out of the gates with a stomping riff that is old school death metal, and Julia Mattila's vocals are suitably grotesque, but something happens when you start to decipher the lyrics. She is not singing of death and dismemberment, but rather the joy of giving your soul to a cherished loved one. It's wrapped in a fetid veneer of death metal, but the sentiment is a pure love song, complete with the requisite poppy melody sung with clean vocals in the chorus.

“Everything” has a chugging main riff and a few modern guitar runs, but still relies on a heavy groove to get to the melody. The chorus is not as poppy as the opener, and is not as memorable either. The project's balancing of light and dark necessitates a bit more fluff from the pop moments. The darkness is well taken care of, but in the up-tempo moments, and the slower, sludgier ones like “Everything”, which crawls along and makes great use of the guitar tone. Instrumentally, this is the kind of death metal I can get behind, with fat grooves and simple riffs that are there to crush you, not dazzle you with technical skill.

The vocals aren't as polished as the playing, the growls adequate for the most part, the cleans needing a more confident touch to really make this music jump out. The melodies are actually pretty good, but Julia's voice doesn't have the power to sell the hooks as strongly as possible. She is ok, but I can hear how a more accomplished clean singer would have made these songs just that much better.

But all of this comes down to a question of what you think death metal is. Can songs that feature lyrics about falling in love and spending your life together in wedded bliss ever really take up that mantle? Or is this really pop music in a Halloween mask? I don't know the answer to that, or if it is up to each one of us to decide. Whatever you call it, it's a more interesting listen than similar projects of this sonic variety have been. It's death metal mixed with pop, of which there is plenty, but little of it makes you think as much as this. So even if musically it's only an enjoyable EP, which it is, there's something more to it that makes it worth checking out.