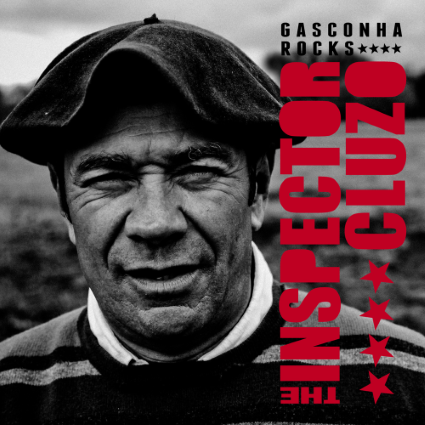 The songs on "Gasconha Rocks" are punk flavored. Somewhat in style but mainly in length. And the songs are good. Really good.

What I found surprising is The Inspector Cluzo is a band of two, count 'em, two members. The "band" is comprised of guitarist/vocalist Malcom Lacrouts and drummer/backing vocalist Phil Jourdain.

Even more surprising is all ten tracks on the album were recorded live in full analog with no edits. Live?! No edits?! That's unheard of in this age of sampling, triggers, over-production and over-dubs. How, I wondered, are two people able to create such a full sound with no edits?

The answer is there are a number of guest musicians performing on "Gasconha Rocks" including a Hammond organ player, a trumpeter and two saxophone players (tenor and baritone). The result, simply put, is freaking awesome.

The style of music The Inspecto Cluzo creates is a mix of rock and funk and has been compared to a meeting of AC/DC and Curtis Mayfield. That is an incredibly accurate description. They've also been compared to a blend of Rage Against The Machine and the Jackson 5. This is slightly less accurate but not completely off the mark.

The Inspector Cluzo is more rock than metal but the rock really rocks. The sound is uniquely their own but if you're wondering what they sound like, I found comparisons to MC5, KISS, Foo Fighters, maybe Tom Waites but all with a funk influence.

As far as the individual songs go, "Hello Goodbye Education", "I Am (Not) A Super Hero", "Garbage Beach" are all winners. The song "Till Petro Do Us Part" got me thinking about The Darkness (the band, not the lack of light). And one of my favorites is "Better Off In Afghanistan" which actually has a Southern-rock feel, all the more with the addition of a jaw-harp. Ah, who am I kidding. They're all my favorites.

The song that really gets me jacked up though is a groovy little instrumental titled "Lo Camin de la Hesta". This is the song that I really wish was about five times longer than it's actual 1:27 length. The drums are swingin', the guitar rocks and there are even horn accents throughout. It is fantastic.

Energetic? Yes. Infectious? You betcha. I have only one problem with this record. The songs are so good I'm disappointed when they end. The longest track on "Gasconha Rocks" is only 3:31 ("Black Spirit"). All too often, bands don't know when to end a song and keep it going for way too long. The Inspector Cluzo gets right to the point, fills you full of the funk and moves on. But I still want more.

Infectious is actually the best word to describe the songs on this record. And The Inspector Cluzo follows that old adage of leave 'em wanting more. Despite it's relatively short length, "Gasconha Rocks" nails it from beginning to end. This little gem made my week. It's punky and it's funky. It's got soul and it's got groove. It rocks and it most certainly rolls. Please, do yourself a favor, give this one a listen. It'll leave you wanting more... in the best possible way.